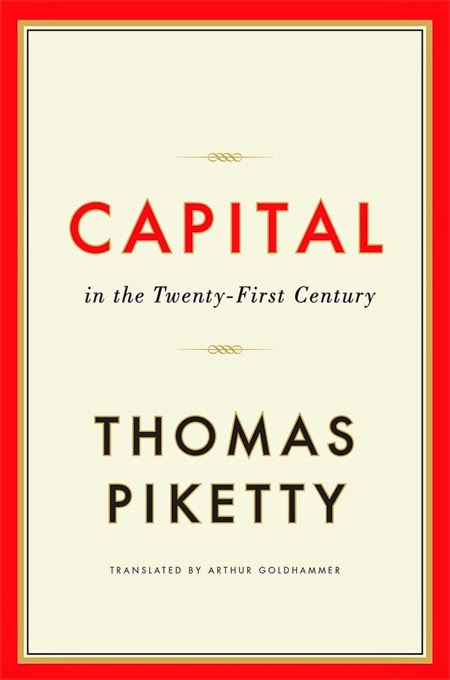 God may have created us as equals, but soon we realize that we are not. Inequality confronts us everywhere in our genes, our gender, and -- most crucially today -- our wealth, because that is perhaps the most important  measure for many people. Now along comes a French economist, Thomas Piketty (pronounced: pick a TEA), who claims that this last inequality is getting worse in his newly published work, Capitalism in the Twenty-First Century.

Up until early this year, few people anywhere, even in France, had heard of Piketty, whose 927-page French version of his book came out in August 2013. The English edition, however, which appeared in March 2014, is only 577 pages, but it has already made him a celebrity everywhere. Amazon now lists it as the top-selling book, fiction included.

The title clearly alludes to Karl Marx's Das Kapital, which appeared in 1867 in German and was not translated into English for two decades, but took five years to sell the first 1000 copies in the original language.

Since I am not an economist. I have had to rely heavily on several articles the The Economist has written on Piketty and his theories on inequality. He uses many charts, many of which are not easy to understand. 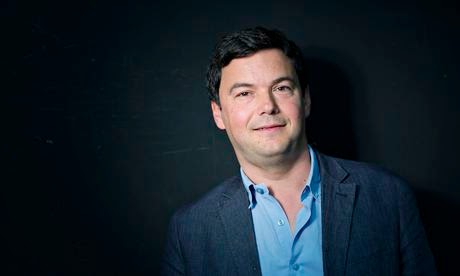 Piketty, who is a pioneer in using tax statistics to measure inequality, painstakingly documents the evolution of income and wealth over the past 300 years, particularly in Europe and America. He shows that the period from about 1914 to the 1970s was an historical anomaly in which both income inequality and the stock of wealth relative to annual national income fell dramatically. Since then, however, both wealth and income gaps have been rising back towards their pre-20th-century norms.

Piketty’s has come up with a theory of capitalism that explains these facts, and offers a prediction of where wealth distribution is heading -- the wrong way. He claims that the free-market system has a natural tendency towards increasing the concentration of wealth, because the rate of return on property and investments has consistently been higher than the rate of economic growth.

Two world wars, the Great Depression and high taxes have pushed down the return on wealth in the 20th century, while rapid productivity and population rises have pushed up growth. Without these countervailing factors, however, higher returns on capital will concentrate wealth, especially when, as now, an ageing population means that growth should slow. The current recession is an additional factor that slows growth.

The surge in inequality has economists today wondering, as Karl Marx and David Ricardo did, which forces may stopping the fruits of capitalism from being more widely distributed. Inequality does not appear to ebb as economies mature nor does the share of income flowing to capital stay roughly constant over time.

Piketty argues that there is no reason to think that capitalism will “naturally” reverse rising inequality. There are too many factors that influence inequality and cause it to ebb and flow. 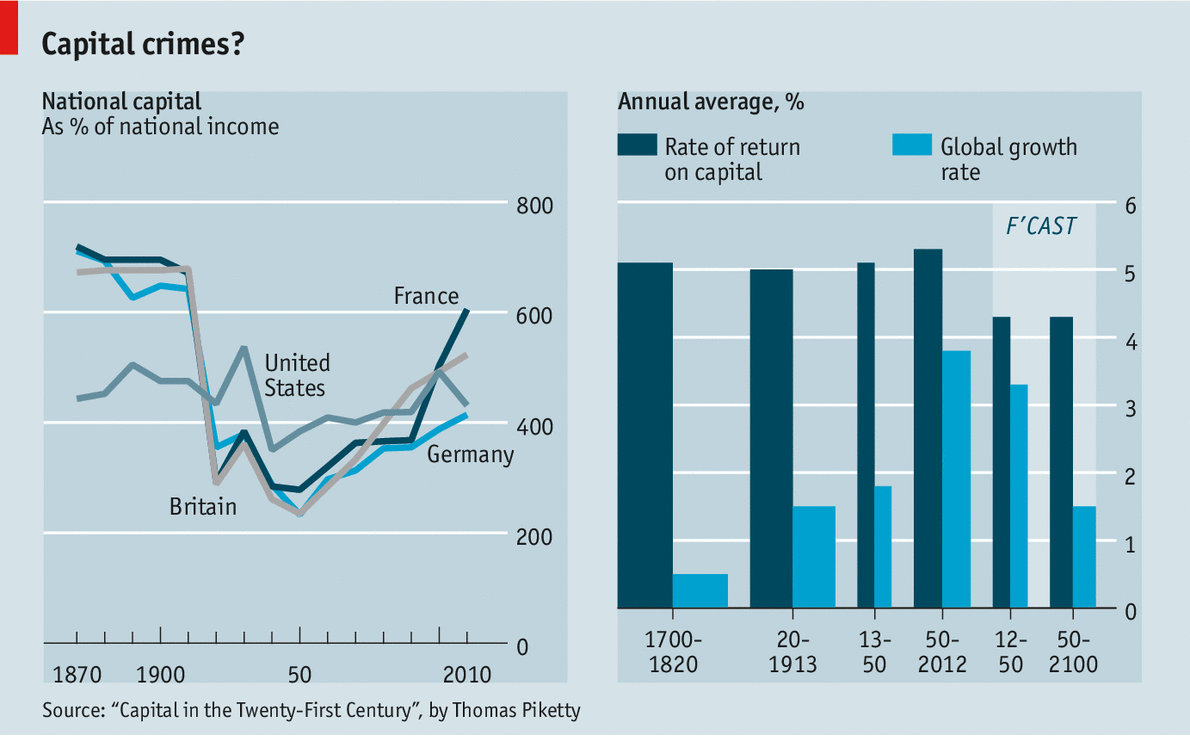 The centerpiece of Piketty’s analysis, as The Economist explains it, is the ratio of an economy’s capital or its wealth to its annual output. From 1700 until the first world war, the stock of wealth in Western Europe hovered at around 700% of national income. Over time the composition of wealth changed; agricultural land declined in importance while industrial capital --  factories, machinery and intellectual property -- gained prominence. Yet wealth held steady at a high level (see above chart, first panel).

Pre-1914 economies were very unequal. In 1910 the top 10% of European households controlled almost 90% of all wealth. The flow of rents and dividends from capital contributed to high inequality of income; the top 10% captured more than 45% of all income. Piketty’s work suggests there was little sign of any natural decline in inequality on the outbreak of the first world war.

The wars and depressions between 1914 and 1950 dragged the wealthy back to earth. Wars brought physical destruction of capital, nationalization, taxation and inflation, while the Great Depression destroyed fortunes through capital losses and bankruptcy. Yet capital has been rebuilt, and the owners of capital have prospered once more. From the 1970s the ratio of wealth to income has grown along with income inequality, and levels of wealth concentration are approaching those of the pre-war era.

Piketty describes these trends through what he calls two “fundamental laws of capitalism”. The first explains variations in capital’s share of income (as opposed to the share going to wages). The rate of return is the sum of all income flowing to capital -- rents, dividends and profits -- as a percentage of the value of all capital. 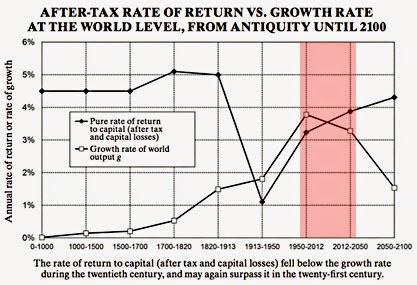 Piketty second law is that over long periods and under the right circumstances the stock of capital, as a percentage of national income, should approach the ratio of the national-savings rate to the economic growth rate. Whether this is a “law” or not, the important point is that a lower growth rate is conducive to higher concentrations of wealth.


You see now why I have relied on The Economist to explain Piketty's arguments, which involve a lot of economic jargon. I want to introduce Piketty to any readers who may be unfamiliar with his thought, yet I do not want to misrepresent him.

His claim that inequality is increasing has profound implications today, even if not everyone is agreed with his premises nor his conclusions. Everyone does concede that Capitalism in the Twenty-First Century is an impressive piece of scholarship.

There has been a lot of criticism of Piketty. He has been criticized especially for his misuse of statistics and for his policy proposals. Space does not permit a detailed analysis of this criticism, but one example of each may be helpful in assessing Piketty's contribution to the inequality debate.

Chris Giles, economics editor of the Financial Times, claims Piketty’s statistics on wealth distribution are undermined by a series of problems. Some numbers, he says, "appear simply to be constructed out of thin air.".He questions Piketty's use of his own sources. And he adds: "The conclusions of Capital in the Twenty-First Century do not appear to be backed by the book’s own sources." 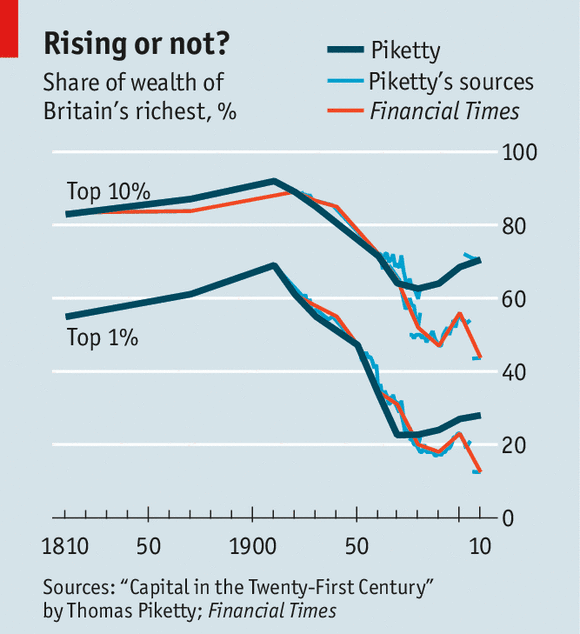 The editors of The Economist conclude that while Piketty may be guilty of sloppiness in his use of statistics, his findings on the concentration of wealth has not been undermined: "He has pulled them together in what remains an impressive piece of scholarship.".

Piketty has provided a detailed response to the critique of Giles, but The Economist suspects that Giles will not be satisfied with the response, thus the discussion is likely to continue. But increasingly the battle seems to be one over methodological choices and data interpretation rather than major data errors or fabrications, as the initial FT work suggested.

In terms of policy proposals, Piketty has also been criticized for his prescription of a progressive global tax on capital, an annual levy that could start at 0.1% and hit a maximum of perhaps 10% on the largest fortunes. He also suggests a punitive 80% tax rate on incomes above $500,000 or so.

The Economist has dismissed this prescription as "socialist ideology" and his book as "a poor blueprint for action." Yet this conclusion is hardly surprising considering the liberal bias of that newspaper. Yet they have tried to provide a fair analysis of Piketty's ideas 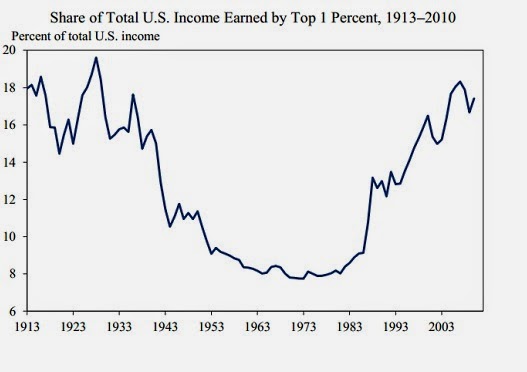 What are we left with after the dust has settled? Capitalism in the Twenty-First Century is a fine piece of scholarship which, while not without its flaws, has effectively used statistics to bolster its claim about the increasing inequality in many parts of the world. Whether its prescription is feasible, is something that is not easy to decide.

Nevertheless, Piketty's warning is valid. If his premises are correct, after several decades of free market mania, the world is headed to superinequality, something that has possibly never been seen before. Increasingly, more and more wealth will be gained off the backs of the 99 percent, and less and less will be earned through hard work.

Is that what we want? Emphatically not!. But what can we do? First of all, I suggest that all those who are concerned about the growing inequality acquaint themselves with Piketty's magnum opus. I admit that I have not yet read the book, but I have tried to read as much as I could about it in order to learn more about the problem of inequality. Now, perhaps, I should put my money where my mouth is and buy this best-seller.