Occupy Wall Street and beyond 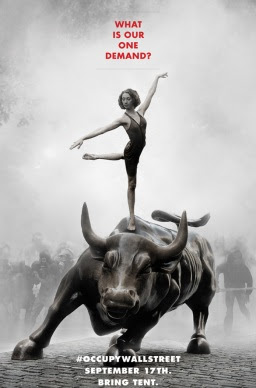 Adbusters poster calling for protest
Command those who are rich in this present world not to be arrogant nor to put their hope in wealth, which is so uncertain, but to put their hope in God, who richly provides us with everything for our enjoyment (1 Timothy 6:17).
I read this text as I watched the news broadcasts during the last few weeks, beginning with New York and then spreading elsewhere, including Toronto, where I live. I would have joined the protesters here last weekend except that I am hampered by a broken arm (see previous post), which also restricts my typing. 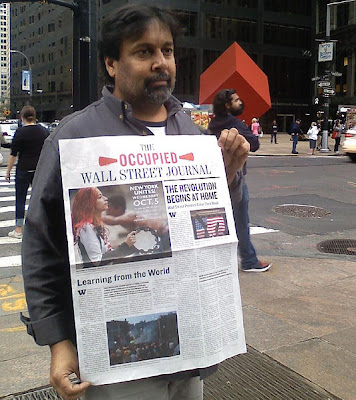 Occupy Wall Street has become a global movement since it first began on September 17. It was inspired by the Arab Spring and conceived by Adbusters, a Canadian-based anti-consumerist magazine, which in mid-2011 proposed a peaceful occupation of Wall Street in order to protest corporate influence on democracy, address a growing disparity in wealth, and the absence of legal repercussions behind the recent global financial crisis.

Although there is no official list of demands in any of the cities where this movement has appeared since then, the protests in the US especially have a common theme of government corruption and the excessive influence of big business and the wealthiest people on the US government.

The use of the slogan "We are the 99%" is significant. The name is a reference to the disparity in wealth between the top 1% and all the remaining citizens of the US. The slogan became popular on the internet in the format of a picture of a person holding a piece of paper with their story on it, ending with "we are the 99%." For more on this, see http://wearethe99percent.tumblr.com/. 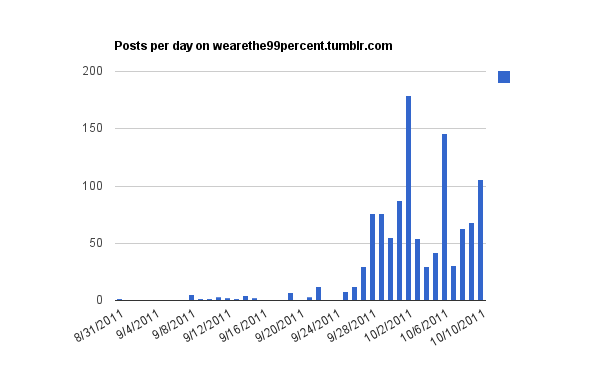 
In other countries, other themes have come to the fore. Surprisingly, there has been little violence by the protesters, except in Europe where recent government austerity programs have enraged many.
This movement is ostensibly non-violent. Whether it can stay that way after the arrest of some protesters, as happened in Chicago last weekend, remains to be seen. 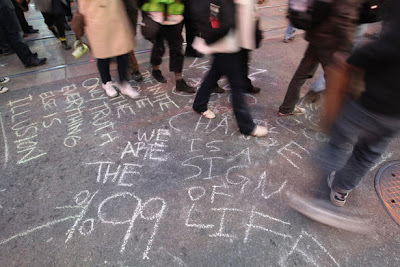 The Occupy Toronto protest (October 17)
In Toronto the protest started on October 15. So far it has been a largely peaceful protest against economic inequality, corporate greed and the influence of corporations and lobbyists on government. Other protests were held in Vancouver and many more Canadian cities for similar reasons.
Canada is not the US. There are many differences, but Canada is moving in a similar direction as its southern neighbor. Thus similar issues to those in the US have been raised in Canada as well.
In the biblical text the Apostle Paul is writing to his assistant, Timothy, and giving him some final advice. These are words that we also need to heed today. At that time there was economic disparity as well--probably even greater than now. But this command applies to us today too.
I do not want this post to sound like a sermon. My motivation is simply to show that the issues that these protests raise are old ones, yet they should not be dismissed for that reason. Ever age has to address them again, using whatever tools they have at their disposal.
Today we have the social media. The Arab Spring was made possible through the use of social media. Occupy Wall Street has been described as the first true internet movement.
This movement, whether locally or globally, is leaderless. Decisions are made not by a charismatic leader but democratically, in fact, by consensus. That this movement has become global is a testimony to the widespread nature of the issues that it signals but also the willingness of so many people, predominantly younger, but not exclusively, to come out onto the streets and brave the elements to protest especially the growing gap between the rich and the poor and the grip that the rich have on the levers of power also in democracies.
The Arab Spring was motivated by the desire for democracy. The Occupy Wall Street movement is motivated by the hope of taking back democracy.
Democracy, as I have pointed out in earlier posts, is under attack. This new movement is a way of vocalizing issues that have been voiced previously, but only softly. Too softly.
Now many people all over the world are crying for change. The need for change is urgent. If you do not realize that yet, then I suggest that you read  http://www.businessinsider.com/what-wall-street-protesters-are-so-angry-about-2011-10. 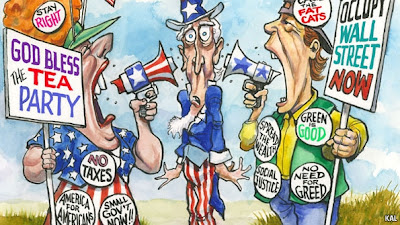 Occupy Wall Street has been compared to the Tea Party, There are indeed similarities. The most striking difference, however, is in the political orientation. The former is left of center, for lack of a better term.
The Tea Party has, unfortunately, become the tail that is wagging the Republican dog. Whether Occupy Wall Street will achieve achieve a similar role among Democrats is debatable. I hope not, because that would only increase the already wide gulf separating the two parties.
But I do hope that the voice that Occupy Wall Street represents will be heard in the corridors of power in Washington and elsewhere, especially in financial centers and corporate offices. And then beyond that to wherever democracy is under attack, or where this tender plant needs to nourished so that it will grow.
How that will happen, no one knows at this moment, but I am glad that it is taking place. The Apostle Paul would no doubt applaud it as well. 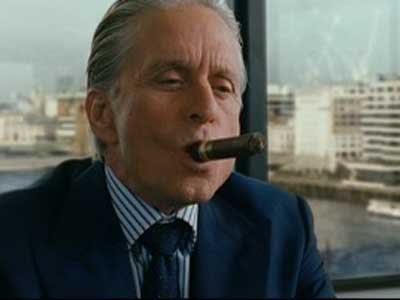 Today too we must command the rich not to be arrogant nor to put their hope in wealth. This is what the
Occupy Wall Street movement is all about.
If the rich refuse to listen, as they no doubt will, we will at least have voiced our grievances. Much more will be required, of course, than protests in parks all over the world. Who knows what form that will take? Time will tell.
From little acorns giant oaks grow. Remember what happened after some colonialists dumped tea into the harbor in Boston.
Think too of the impact that the Occupy Wall Street movement can have globally. A new revolution may have started, one that is quickly spreading all over the world.