Lent and the world

For days, especially while I was visiting family in the US, I puzzled over what to write in my blog. Then it came to me: Lent, which starts tomorrow, and the world in which we live. This is how I brought them together. 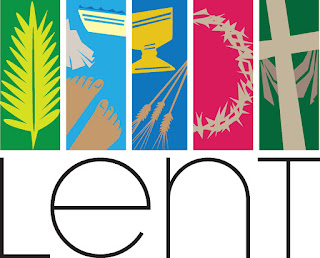 Lent is a forty-day period before Easter. It begins on Ash Wednesday. Sundays are not counted among the forty days because Sundays commemorate the resurrection of Christ. This year Lent begins on 10 February (Ash Wednesday) and ends on 26 March, which is the day before Easter.

In the Roman Catholic Church, Lent officially ends two days earlier, at sundown on 5 April (Holy Thursday). The Eastern Orthodox churches count the days differently. They also follow a different calendar and have different dates for the celebration of Easter and, thus, the start of Lent.

Lent originated in the very earliest days of the Church as a preparatory time for Easter, when the faithful rededicated themselves and when converts were instructed in the faith and prepared for baptism. This custom is still observed today in many churches.

By observing the forty days of Lent, Christians imitate the withdrawal of Jesus into the wilderness for forty days. Nearly all churches now observe Lent, believing it to be a commandment from the apostles.

Originally, Lent was nothing more than the English name of the season between winter and summer, but eventually, it came to mean just the observance and not the season. In contrast, the Dutch word "lente" never changed its meaning. It is still the name of the season while  Lent is translated as "vasten" which means fast. 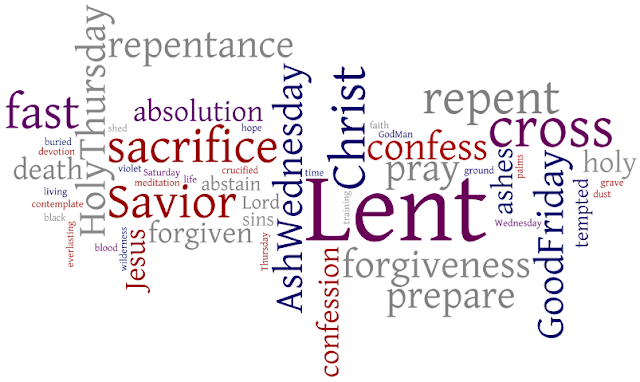 Lent is a season of soul-searching and repentance. It is a time for reflection and taking stock of one's spiritual life. Many people take good care of their bodies, but they neglect their souls. Not that I accept a body-soul dichotomy, but I use the word "soul" to describe that part of every human being that yearns, knowingly or not, for someone or something outside of themselves.

"Heart" is, perhaps, another word for that part, but that too can easily be misunderstood, especially with Valentines' Day coming this year only a few days after the beginning of Lent, but "heart" does convey the idea that our god is whatever or wherever we direct our hearts.

Fasting is an important part of Lent, but it is not the only practice during this observance. The forty days in Lent are marked by fasting from foods and festivities, and by other acts of penance. The three traditional practices to be taken up with renewed vigour during Lent are prayer (justice towards God), fasting (justice towards self), and almsgiving (justice towards neighbour). I'll come back to this in a moment.

Fasting during Lent was more severe in ancient times than today. In some places, all animal products were strictly forbidden while others will permit fish, others permit  both fish and fowl, others prohibit fruit and eggs, and still others eat only bread. And in some places, the observant abstained from food for a whole day until the mid-afternoon or evening. The Orthodox are much more regid even today in their fasting practices.

However, in modern times, observers give up an action of theirs considered to be a vice, add something that is considered to be able to bring them closer to God, and often give time or money to charitable purposes or organizations. Such actions, however, should become part of the daily routine of every believer all year long and not just be limited to Lent. 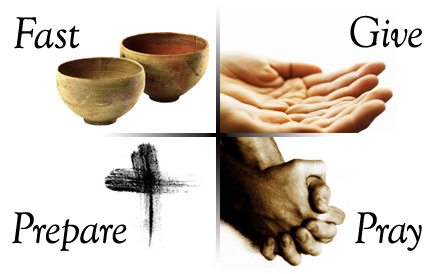 In addition, some believers add a regular spiritual discipline, such as reading a Lenten daily devotional. My wife and I read such a devotional every day and not only during Lent. We also have the custom, inherited from our parents, of daily Bible reading and prayer after meals, although I admit that this has become more difficult for us for other reasons.

Pope Francis asks us to reconsider the heart of this activity the Lenten season. According to Francis, fasting must never become superficial. He often quotes the early Christian mystic John Chrysostom who said:

Francis does not to downplay the role of sacrifice during the Lenten season. Lent is a good time for penance and self-denial. But he reminds us that these activities must truly enrich others: "I distrust a charity that costs nothing and does not hurt." So, if we’re going to fast from anything this Lent, he suggests that -- even more than candy or alcohol or whatever -- we fast from indifference towards others.

In his annual Lenten message in 2015, the pope wrote, "Indifference to our neighbor and to God also represents a real temptation for us Christians. Each year during Lent we need to hear once more the voice of the prophets who cry out and trouble our conscience." 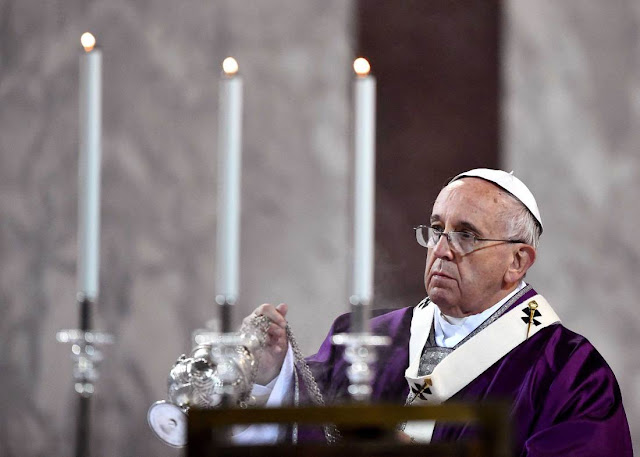 Describing this phenomenon he calls the globalization of indifference, Francis explains that "whenever our interior life becomes caught up in its own interests and concerns, there is no longer room for others, no place for the poor. God’s voice is no longer heard, the quiet joy of his love is no longer felt, and the desire to do good fades."

He continues, "We end up being incapable of feeling compassion at the outcry of the poor, weeping for other people’s pain, and feeling a need to help them, as though all this were someone else’s responsibility and not our own."

But only when we fast from this indifference, can we begin to feast on love. In fact, Lent is the perfect time to learn how to love again. Jesus, who is the great protagonist of this holy season, showed us the way. In him, God descended in order to bring everyone up. In his life and his ministry, no one was excluded. We should not do so either.

This is where the world comes in. God's love includes the whole world. By extension, our love should do the same.  Especially during Lent, we need tp practice love in the context of doing justice in the three-fold way I mentioned in a previous paragraph.

We must pray to God on behalf of the world, that justice prevail everywhere. We must fast with the realization that many in this world do not have enough to eat and practice fasting involuntarily. We must also give alms, but not in the niggardly way we often do, but generously, with all our heart, and with an open wallet.

But there is more that we must do for the world. We must fast from our indifference to all the suffering we see all around us, not only human suffering but also the suffering of the natural world. Hw can we stand by and pretend that human beings have not contributed to climate change . Climate change is real and the result will be catastrophic for the entire world as a result. Unfortunately, the poorest people in the world are the least equipped to deal with the impending catastrophy.

What about refugees? If some of the Republican candidates for the presidency of the US had their way, none of them would be allowed to enter the country. The same goes for Muslims, who should all be deported. Ask yourself if these candidates are demonstrating even one iota of love for others, and on that basis decide how you, if you are an American, will cast your vote in November.

Lent means loving the world, but not in the hedonistic sense, which is focused only on ourselves. Rather, we must love the world in the agapic sense, just as God sacrificed himself in selfless manner. That is not easy, because we are by nature -- our fallen nature -- selfish and selfcentered. However, our redeemed nature makes it posible for us to love as we must love, even if it initally involves only a few small steps. And, as our faith matures, we will be able to take larger steps.

Then, and only then, will we be a ble to practice Lent in 2016. Lent urges us to repent from our indifference and it renews our resolve to love as we ought to love. As the namesake of Pope Francis famously said, "Lord, make me an instrument of thy peace. Where these is hatred, let me sow love." Let us sow love today throughout the world. Is that too much for God to ask of you?

God is not asking you to give up much during Lent this year, except your indifference to him and to others. However, he does ask -- no, demands -- you to love him and the world in which he has placed us. 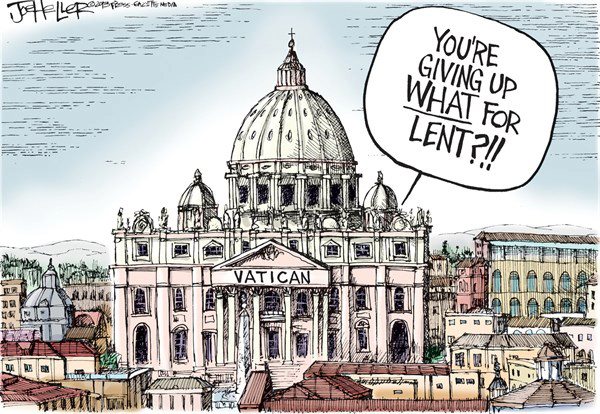