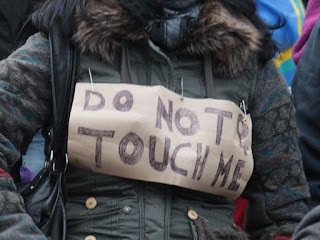 Cultural clashes are well known to all of us. One does not have to travel very far from home to experience cultural clashes. Sometimes one can experience such clashes with a next door neighbor who hails from another country. Fifty percent of the population of Toronto, for example, was not born in Canada and thus clashes happen. Cultural clashes can even happen within a marriage.

Thus, it is hardly surprising that refugees experience cultural clashes, and that these clashes can have serious consequences for both the host culture and the refugees themselves. What can be done about such clashes? They may be inevitable, but how do we avoid disastrous consequences or, at the very least, mitigate them?

On New Year's Eve, more than 1,000 migrants, many of whom were able to speak German, sexually assaulted many German women outside the main train station in Cologne, Germany. Dozens of women were molested and, reportedly, raped, and dozens of men were assaulted and robbed.

One victim, 28 year old 'Katja L' described how she, together with two other girls and a boyfriend, tried to make their way out of the railway station when they was met by a group of "exclusively young foreign men." She explained what happened:


We then walked through this group of men. There was an alley through [the men] which we walked through. Suddenly I felt a hand on my buttocks, then on my breasts, in the end, I was groped everywhere. It was a nightmare. Although we shouted and beat them, the guys did not stop. I was desperate and think I was touched around 100 times in the 200 meters. Fortunately I wore a jacket and trousers. a skirt would probably have been torn away from me. 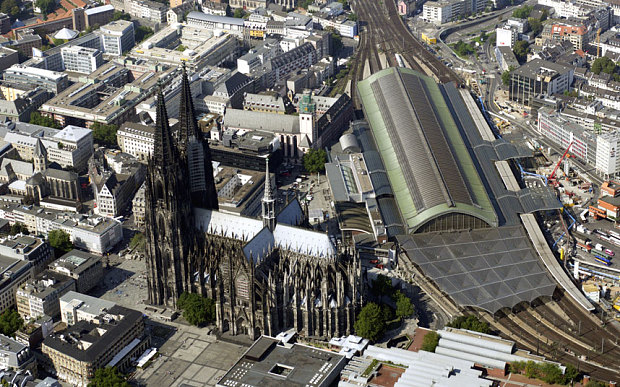 The Cathedral (center) and the Main Train Station (right) in Cologne

Katja L, and other witnesses who have since come forward, said the men laughed, pulled hair, hurled shouts of "ficki, ficki" (fucky fucky) at them, and called them "sluts." There had been so many men groping her, she added, that she would have been unable to positively identify any of the perpetrators to the police.

Even though the area in front of the railway station was comprehensively monitored by CCTV, and having thousands of potential suspects, A few days later, Cologne police arrested five men, but it was not clear that they were connected with the earlier crimes.

The police were severely criticized after it emerged that just ten officers had been dispatched to the station after the report of a sex assault in the early hours of the morning. As well, there were unverified accusations of officers ridiculing victims for not having been vigilant enough to avoid being attacked.

Many people accused the national media of engaging in a cover-up due to the ethnic background of the criminals, with many pointing to the fact that the details of the story did not reach national and international attention for several days.

According to the police, "The crimes were committed by a group of people who from appearance were largely from the north African or Arab world." But the police also insisted that many of the men had been known to them for some time and that they were not a group of newly-arrived refugees.

Some Germans later worried that the attacks would lead to a backlash against refugees. On Twitter, one wrote, "it makes me sad that the refugees who really need protection will bear the brunt of the hatred because of Cologne. We need to be able to tell the difference."

Official figures suggest that refugees are no more likely to commit sexual crimes than other sections of the population. But there is a growing body of anecdotal evidence of sexual crimes committed by new arrivals bubbling up from Germany's regional media.

In November, a club in Bavaria started turning refugees away after a string of complaints of sexual harassment from female clients. In Baden-Württemberg, one hospital has hired guards to protect nurses who feel intimidated by the refugees they treat.

The Woman’s Council in Hesse claimed in an open letter to the state parliament in September that they have substantial evidence of sexual abuse, including forced prostitution, in refugee shelters. In North Rhine-Westphalia police reportesdly covered up the rape of a 13-year-old girl by a refugee. Authorities have been accused of playing down or even hiding cases of rape at refugee shelters.

According to the German daily Die Welt, most of the crimes committed by refugees are related to travelling on public transport without tickets or theft. Less than 1 percent of the total crimes committed by refugees are sex crimes, contradicting rumors that these have become more common with the arrival of hundreds of thousands of refugees. However, the rate of crime in refugee reception centers has gone up quickly. 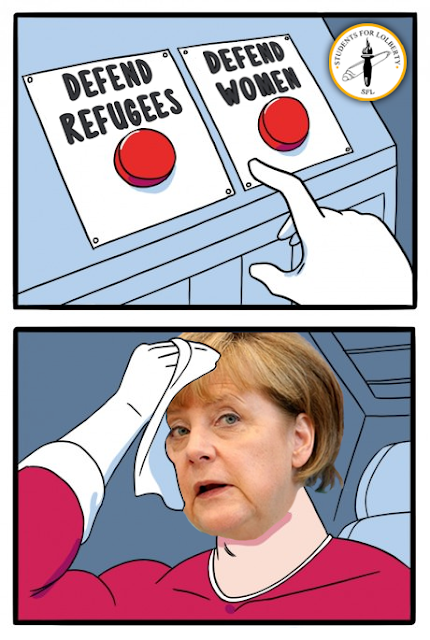 The seriousness of the crime in Cologne and the fact that it has happened to German women rather than refugees could signal a change in the national discussion. A friend who lives in Germany clarifies the problem posed by the newly-arrived refugees.


Over 1 million refugees were admitted to Germany in 2015.  Chancellor, Angela Merkel, is confident that her country can survive this influx. Wir schaffen es! she said (We will make it!). She is under pressure to better control the borders in order to limit refugees, improve processing, integration, and repatriation. Merkel wants to maintain her stand to keep the border open, although she is in favor of reducing the overall numbers by repatriating economic and criminal refugees.

With increasing numbers of refugees and cultural clashes that followed, fear has overtaken discomfort for some Germans. Recently one town’s swimming pool was temporarily closed to recent refugees in order to protect female bathers. There is now more pressure to disclose the more frequent sexual attacks in and around refugee accommodations.

Germany has faced the problem of integration before. In the 60s Germany employed Turkish guest-workers who were largely Muslim. Many of these men did end up staying, and bringing their families into the country. Although Muslims and Germans did business together, integration was not achieved. Multiculturalism was declared a failure and proclaimed dead. 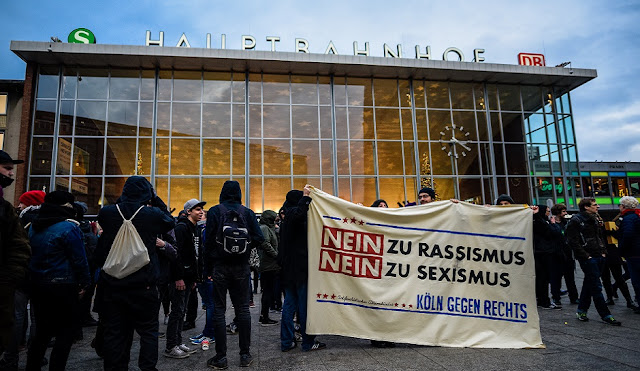 No to racism and no to sexism, reads this sign in front of the train station in Cologne

According to my friend, multiculturalism in Germany has not failed entirely. She cites the 100,000 Hindus living in Germany who also experience cultural clashes, yet many do want to integrate. In contrast, one journalist question to intention of some Muslims:

Mutual respect is a prerequisite for a peaceful coexistence in a multicultural society. The question is: Does Islam promote and generate mutual respect? If it doesn't, then the incidents in Cologne and other German cities will multiply until Germans finally toss out all Muslims, just as some presidential candidates in the US have already threatened to do.

But Germans still want to try integration. Some have organized programs that, by way of role-playing and discussion, challenge machismo, instruct in sexual moral conduct with women, and question the notions that Muslim men grew up within their the culture from which they stem. These programs are intended to facilitate the integration of new asylum seekers and refugees. Such programs are a start, but more is needed.

From the Muslim side, there must be a willingness to adapt to the host culture and try to integrate in the country that they and their children now call home. That means, among other things, that they no longer perceive of all Western women as "sluts" whom they can use as they want. Sexual harassment is a crime in Western countries, and such behavior is no longer tolerated whether in public or in private. 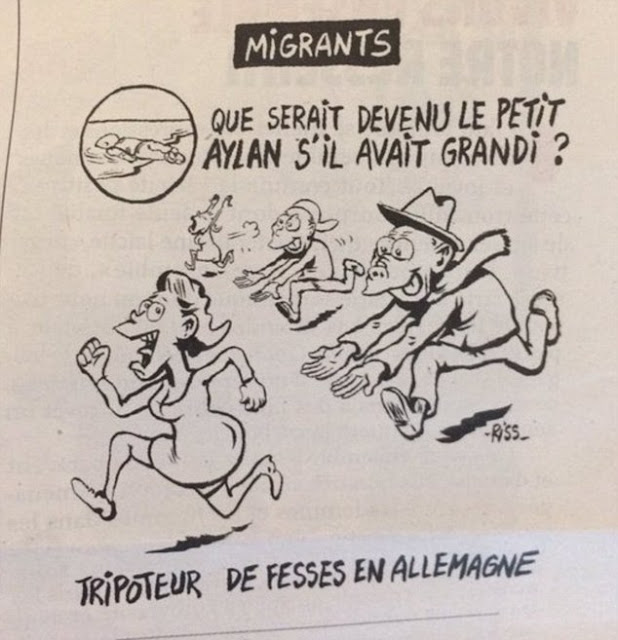 "What would have become of the small Aylan had he grown up?" asks  the French satirical magazine Charlie Hebdo, with the cruel and insulting answer at the bottom: "ass groper in Germany"

One more point, the media must no longer attempt to cover up such behavior even at the risk of being termed "racist." Only racists pretend not to see racism. Instead, the media should do their duty and speak to truth, the whole truth, and nothing but the truth.

Then and only then can Western countries begin to deal with the cultural clashes that an influx of refugees makes inevitable. What is not inevitable, however, is that these clashes drive the host cultures and the refugees further apart.

Behavior, such as happened in Cologne on New Year's Eve, cannot be tolerated. All of us need to work together to end such behavior and create a new culture where such clashes no longer happen. That means a form of integration in which all cultures learn to accept and respect each other.

Germany is not the only country that has this problem, but it has accepted more refugees than any other Western nation., which only serves to intensify an already tense situation. Merkel has done a remarkable job of dealing with the problem in the aftermath of the Cologne assaults, although she has been criticized from all sides.

Other Western countries can learn from the German experience, both positively and negatively, especially those have admitted a large number of refugees. Canada, which has an official policy of multiculturalism, can also offer its experience. Cultural clashes will contunue as long as there are refugees, but the effects can be mitigated. The goal, eventually, should be to integrate refugees to such an extent that extreme cultural clashes, such as the one in Cologne, become a thing of the past.