Are US Republicans waging a war on women? 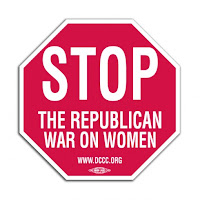 "Are U.S. Republicans waging a war on women?" is the headline of a recent article in the Toronto Star. The article begins by quoting Rush Limbaugh's tirade against Sandra Fluke, a Georgetown University law student, who had just testified before a congressional panel to oppose a federal health-care exemption that would allow employers with religious beliefs to opt out of covering the cost of contraception.

“What does that make her?” the shock jock fumed into his radio mike. “It makes her a slut, right? It makes her a prostitute. She wants to be paid to have sex.” And then the kicker, “if we are going to pay for your contraceptives — and thus pay for you to have sex — we want something for it. We want you to post the videos online so we can all watch.” 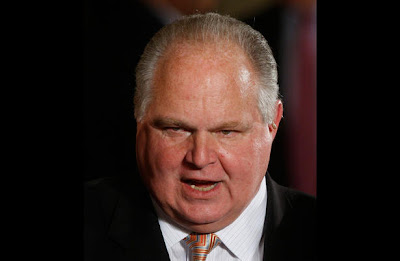 Limbaugh's comment is offensive not only to women but to any decent-minded person. Accusing Fluke of being a slut and a prostitute is bad enough, but to talk about her making a sex video that he and others could watch makes one wonder about Limbaugh's morality. The guy is sick.

Limbaugh backed off from his tirade with a vague apology as advertisers immediately cancelled their contracts. But not before a political tornado that had been brewing for several years in the US spiraled out of control. 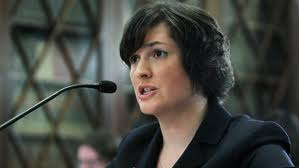 Terry O’Neill, president of the National Organization for Women, which advocates for women’s equality. says, “This is absolutely a war against women.” She is talking about the Republican-led campaign to undermine women’s reproductive rights across the states as well as federal jurisdictions. Using religious rights, fiscal restraint and an ongoing US culture war as weapons, it has targeted abortion, contraception, even rape laws.

One does not have to agree with everything the National Organization for Women stands to recognize the truth of the statement that there is a war against women. 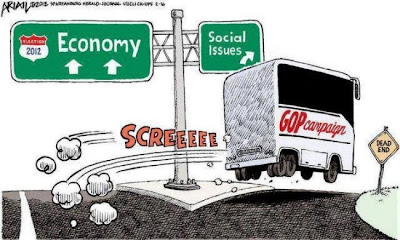 This war has alienated more moderate members of the Republican party, and caused internal anguish at a “coup” carried out by extremists on the conservative far right, who have pulled Republicans into a pit they will need to climb out of before the November presidential election.

In my last post I wrote about the anti-intellectualism that the Republicans, personified in their current crop of presidential candidates, display. That issue may spell doom for the GOP in November. The war on women may well be straw that breaks the camel's back. 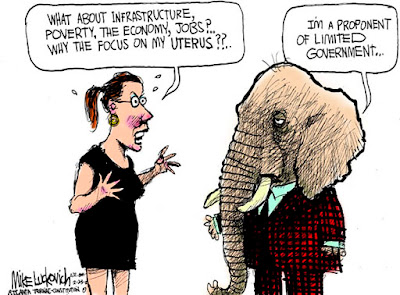 To an increasing number of ordinary American women, the Blunt Amendment -- sponsored by Republican Sen. Roy Blunt of Missouri -- was the latest salvo in an ongoing battle. President Barack Obama’s health-care legislation had planned to eliminate exemptions for religious institutions that opposed contraception. Instead, he decided they could opt out, but insurance companies would pay. Blunt aimed to close that loophole, while widening the space for employers to avoid coverage on moral grounds.

But its defeat was only one setback in the steady march of state and federal legislation across the decades-old territory of women’s reproductive rights -- and two similar bills are pending in Congress. No wonder many activists in the US insist that the Republican party no longer represents the majority of its members any more. Instead, it has been taken over by a small, but powerful and vocal, faction. 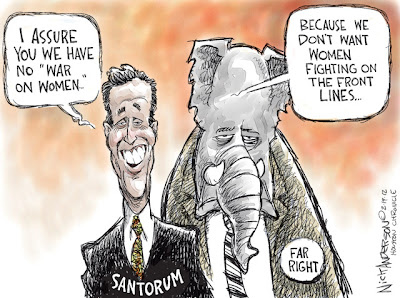 As the Star article points out, pronouncements by dogmatically devout Catholic presidential candidate Rick Santorum have only punched more holes in a strategy that seems doomed to sink. He has campaigned for the criminalization of abortion and blamed it for overloading the social security budget. He has also opposed contraception, dissed prenatal testing and proclaimed sex a purely procreative function.

David Frum (who is a Canadian by birth), a moderate Republican and former speechwriter for President George W. Bush, says the early surge of support for Santorum, Limbaugh’s over-the-top outburst against Sandra Fluke, and a Democratic effort to make Republicans “look like the aggressors in a war against women have created a trap the party will find it hard to wriggle out of." 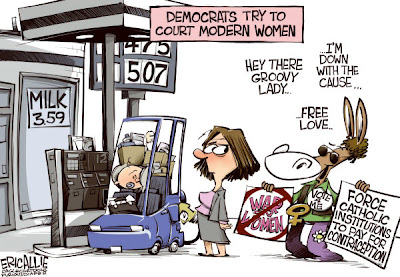 Frum insists that Obama is to blame for making the religious exemption for contraception a high-profile political issue when he could have left the volatile issue alone. This is what I already wrote in a previous post on this issue. Obama did not deal with it as wisely as he should have.

Frum sees the GOP as the chief casualty: “I don’t think anyone on the Republican side at the beginning intended this to be a campaign or project. They are horrified and upset. Even if they win and protect the historic status quo and write it into law, they would still lose the media debate.”

"For Republicans, being ‘pro-life’ on abortion is a bit of a litmus test,” says John Green, a political scientist at Ohio’s University of Akron who specializes in religion and politics. “It’s hard to get a nomination if you don’t pass the test.” 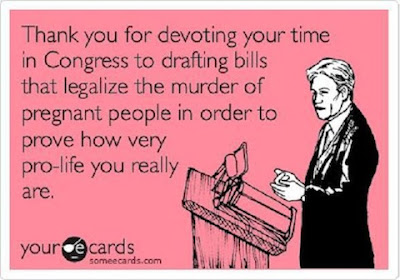 At state level, he points out, efforts to push through laws restricting abortion have been unrelenting. In 2011, a record 92 new abortion restrictions passed in 24 states, breaking the previous record of 34. Other states barred the use of public funds to train medical staff in abortion procedures. North Carolina, Texas and Utah use the proceeds from selling “Choose Life” licence plates to fund “alternatives” to abortion. Five states require women to undergo ultrasound scans prior to abortion, and give them an opportunity to view the  fetus. Planned Parenthood, a major health-care provider for poor women, has been hit hard with funding restrictions. In addition, some states have moved to restrict sex and HIV/AIDs education in schools and promote counselling of abstinence.

What is driving this war on women? “It’s become a major ideology of the Republican Party,” says Jon O’Brien, president of Washington-based Catholics for Choice, an international advocacy group of Catholics who believe women should follow their conscience in reproductive matters. “People with (more liberal) records are being driven out.” 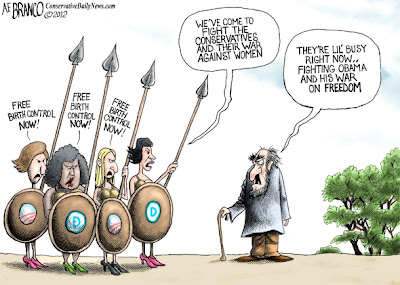 Polls seem to agree. They show the percentage of Republicans who describe themselves as “moderate” has plummeted in the last decade from 31 per cent to 23 per cent. But while evangelical Christians had a grip on the conservative agenda in George W. Bush’s day, the Catholic bishops are now taking the helm, according to O’Brien. “The Republicans are playing to them because they think if they can galvanize just enough Catholic voters, they will control the way the presidency goes.”
But O'Brien adds, “when you look at what Catholic voters want, it’s clear. It’s health care, education and putting food on the table. Abortion is way down the list, and the idea that politicians are debating birth control is simply extraordinary.” 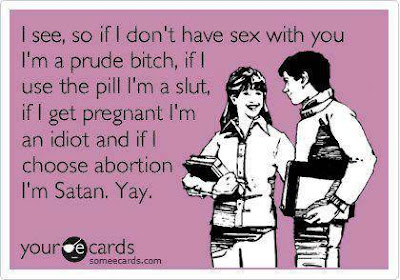 The war over reproductive rights may never be over. But the Republican primaries will soon be, and with them the contest to win over the most conservative voters. But great, perhaps irreparable, damage will have been done to the Republican party. The war on women may eliminate them from the political scene for many years to come as a party that respects the rights of women. Instead they will be seen as representing a fringe group that spouts an incoherent ideology. Rush Limbaugh will be their spokesman.

Evangelical Christians and Roman Catholics have hitched their wagon to a party that does not represent the majority in the US. The GOP has been taken over the Tea Party and other ideologues who are threatening to destroy it.

Statistics show that the Republicans seem to be splashing upstream without a paddle, to mix my metaphors. At least 90 per cent of American women use birth control in their reproductive years, according to a survey by the Washington-based Guttmacher Institute, which advocates for sexual and reproductive health. And about three in 10 terminate a pregnancy by the age of 45. How will these women vote if the Republicans continue with their war on women? 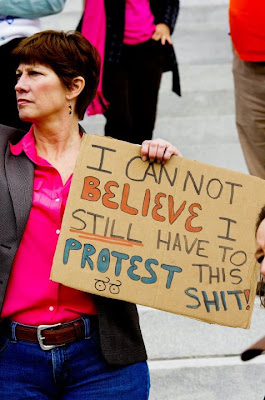 I am writing this not as a dispassionate observer of the American scene. My interest is profound both as a Christian and as neighbor. Yet I cannot stand by while some Americans wage a war on women. I admit that I too am opposed to abortion, but this is not the way to do it. Stop the war on women!