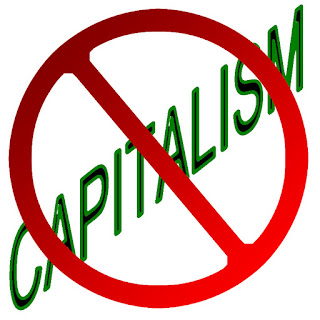 Chrapitalism is a neologism that expresses the union of Christianity and capitalism. When I first saw this word, I mentally confused it with "crapitalism," which is defined as "the innate tendency of capitalism to subvert democratic and idealistic tendencies in a government, profession or organization."

Chrapitalism is indeed a form of crapitalism, in the sense that capitalism has subverted Christianity by turning it into something that is foreign to the essence of what Christ intended.

In a book review in Books & Culture, Eugne McCarraher describes Chrapitalism as "the lucrative merger of Christianity and capitalism, Americas most enduring covenant theology. It's the core of 'American exceptionalism,' the sanctimonious and blood-spattered myth of providential anointment for global dominion." 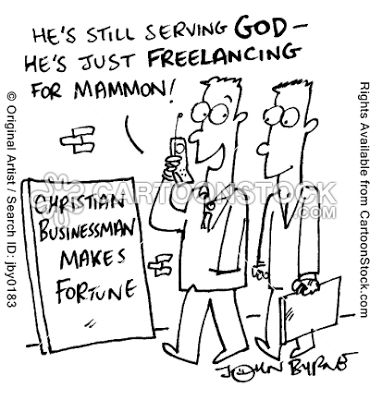 "In the Chrapitalist gospel, the rich young man goes away richer, for God and Mommon have pooled their capital, forming a bi-theistic investment group, and laundered the money in baptismal fonts before parking it in off-shore accounts."

"Chrapitalism has been America's distinctive and gilded contribution to religion and theology, a delusion that beloved community can be built on the foundations of capitalist property. As the American Empire wanes, so will its established religion; the erosion of Chrapitalism will generate a moral and spiritual maelstrom."

McCarraher does not mince words in his description of Chrapitalism. I want to thank him for introducing me to this term that more than any other I have have ever met best describes the illicit union of Christianity and capitalism. Unfortunately, too many Americans are oblivious of their incompatibility. 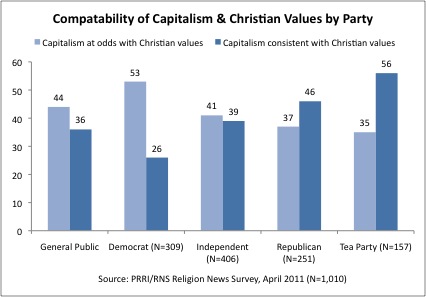 Many of them think that they are synonymous. In a recent poll, 36 percent of Americans thinks so, while 44 percent do not. This holds regardless of religious affiliation. But Republicans and Tea Party members, college graduates, and members of high-income households view these two systems as more compatible than others, such as women, Democrats, and those of low income, who are more likely to believe they are incompatible.

With the American Empire beginning to disintegrate, and the demise of the American Dream becoming more real everyday, as we noticed in my latest post, as the middle class slowly disappears, some Americans are waking up to the idolatrous nature of Chrapitalism.

But their Casandra-like warnings are largely dismissed, even by many fellow Christians who prefer to remain oblivious to this idolatry and dismiss their objections as treasonous.

The harsh realities of the current recession may finally push many disadvantaged groups to question even more the compatibility of Christianity and capitalism. The followers of the cult of capitalism, however, may be harder to persuade.

Some are still unable to recognize the incongruity of preaching about Jesus while chasing the almighty dollar. They have been brainwashed to believe in a "trickle down" economy by the plutocrats of this world. They do not realize how they are used by scheming politicians who have been bought to promote the interests of the very rich.

In this respect, Barack Obama is little better than George W, Bush, who cynically used evangelical voters while pursuing the interests of rich individuals and corporations who had showered him with election funds. Every president has largely catered to the interests of the plutocracy. Presidents too are politicians.

The plutocrats of this world control the reins of power. Their chief concern is to make as much money as possible, even if that involves trampling on people's human rights, as happened recently in Bangladesh, where more than 1000 people died after the building in which they worked collapsed. 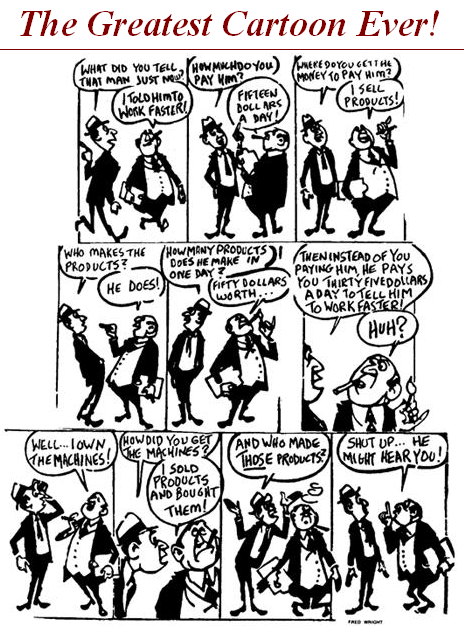 In Canada the federal government has already ravaged welfare and unemployment insurance and is now intent on gutting pensions in the unionized public sector,. All this is happening under a prime minister who is an evangelical Christian and whose party has in past elections received a lot of support from many Christians.

Social welfare programs are being undermined in many countries, while the rich receive subsidies. Moreover, the rich stash much of their loot in overseas accounts where it is safe from the taxman. In Canada, individuals and corporations have hidden about $8 billion a year overseas.

When this was reported recently, the response of the government was that it would ferret out those who did this, while at the same time it was laying off staff from the Canada Revenue Agency, who are responsible to do that. This lost revenue will need to be made up by middle class tax payers who cannot hide their wealth that way, for elementary two reasons: they don't have it, and they don't have the resources to hide it.

Are there alternatives to capitalism? Of course, there are, but I am not promoting any particular alternative in this post, since each one has both strengths and weaknesses.

What I am affirming it this: capitalism is a seriously flawed system that privatizes profits and socializes risk. It hurts the weakest members of society, while the benefits accrue to the wealthiest. 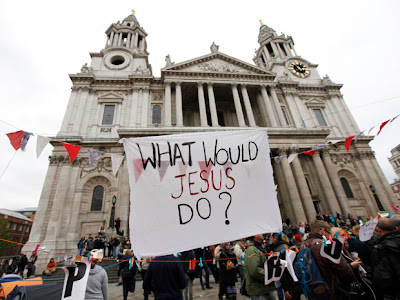 Would Jesus approve this system? Hardly! Would the man who drove the money changers out of the temple not treat the denizens of Wall Street the same way, if he were to return today?

The system is so broken and seriously flawed that it will be exceedingly difficult to repair. Therefore, while some Christians remain blind to Chrapitalism, the urgently needed changes that will make it possible for everyone in society to benefit equitably, and not just plutocrats, cannot transpire.

These Christians are unwilling or unable to help the poor and disadvantaged, and one day there will be no one left to defend them. By then it will be too late. The 1000 plus workers who were killed in Bangladesh are a symptom of what will happen to the rest of us sooner or later.

Capitalism is killing us! One way to stop it is to end Chrapitalism. Stop it, or Jesus will condemn us too!

Read the following poster. Except for some offensive language, it has a powerful but disturbing message. I expect it will disturb you as much as it does me. 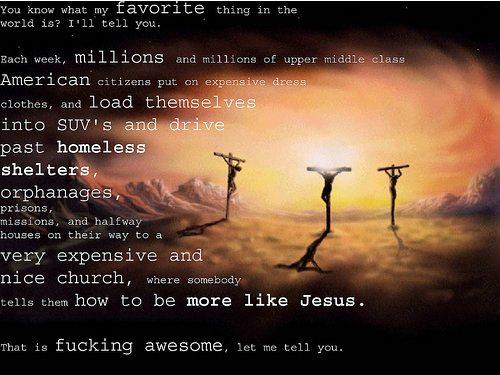 I hope that this post inspires you to engage in a meaningful dialogue on this topic both with me and others.