What is a good death?

I have decided to begin blogging again on a regular basis. Now in this Easter season I can write with new energy and conviction. I will, however, refrain from discussing politics, especially the American variety, as much as possible. But my resolution may not be enough to deter me from such a discussion if the situation in the world continues to develop the way it has. Clearly the world is becoming more and more divided.

Today, I want to discuss a topic that affects all of no matter who we are: death. Benjamin Franklin famously observed that nothing is certain in life, except death and taxes. (This saying is now attributed to Daniel Defoe or Christopher Bullock.) I would add that the rich can avoid taxes, but no one escapes death. 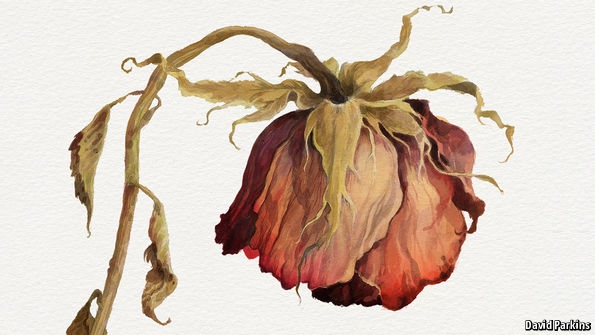 What is a good death? This question is motivated by an article in The Economist on the topic of death. As the magazine explains, "death is inevitable, but a bad death is not." How does it define a good death? How would you and I define such a death?

Recently, I commemorated the death of my mother which occurred three years ago. It has been more than a decade since my father died. Both of them has led what many would describe as good -- even if difficult -- lives, but had they also experienced good deaths? I think not.

Death used to come by stealth, but that is no longer the case. Now, three-fifths of deaths come slowly and involve a slow, progressive deterioration of function. According to the article, people in wealthy countries can spend eight to ten years seriously ill at the end of life. Yet few of the 56m or so people who die each year receive good end-of-life care.

In Britain, where the hospice movement which is dedicated to providing high-quality care to dying patients arose, only about a fifth of that country’s hospitals provide access to palliative care on a regular basis.That may change through the Conversation Project in which share stories of the "good deaths" and "bad deaths" experienced by their loved ones.

Most people dread the experience of contemplating their own mortality. When death is hidden away in hospitals and nursing homes, it becomes less familiar and harder to talk about. I have lived in many countries where death is an everyday event. There it cannot be hidden; it is discussed daily.

But honest and open conversations with the dying should be as much a part of modern medicine as prescribing drugs or fixing broken bones. The article concludes:"A better death means a better life, right until the end."

As part of such a conversation, I want to share the story of my parents. Neither of them experienced what I would term a "good death," one where they in their last days were treated with the dignity they deserved and without unnecessary pain, although my father's death occurred more quickly than that of my mother and it was relatively painless. Even then, his death was not the "good death" he might have wished.

My father died as the result of a fall, yet he should have been allowed to die at home rather than in a hospital where I saw him yet in bed for a few weeks. What kept him alive, I think, was his desire to celebrate his 87th birthday, which he did the day before he died. I had to rush back from Nigeria where I was working only a month after returning there. I arrived just in time for his funeral. 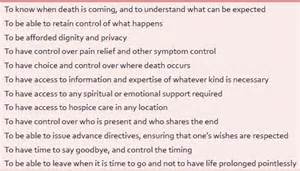 Some principles of a good death

My mother suffered unnecessary pain for many years in a nursing home before she died. I say unnecessary because she was deprived of the pain killers that could have made her last days more bearable. Only in the last week of her life was she allowed to receive as much morphine as she needed. Why? Were her doctors afraid that she would become addicted?

For a long time she also suffered the indignity of witnessing cancer eating away her face and limbs. Pain and a loss of dignity caused her to ask God to end her suffering and take her "home." She was a woman of deep faith, and yet she was not afraid to ask her children to pray that God would hasten her death. I confess that I prayed that with her on more than one occasion.

The day before her death I took a final photo of her, but I deleted it the next day because I could not bear this memento of a once proud woman. A shell was all that was left of my mother. I did not want to dishonor my memory of someone who had borne me and my siblings and had raised us with love. She prayed every day for her children, grandchildren and great-grandchildren, and not just for God to take her home.

In spite of her prayers for relief from her suffering, she enjoyed what was left in her life. Eating was one of her little remaining pleasures. Another was a little drink once in a while. Why not? She could have stopped eating and ended her life that way, but that was not her style. Only in the last week, when she could no longer eat, did that hasten her death. How sad in a way! How wonderful in another. Finally, release from her suffering. 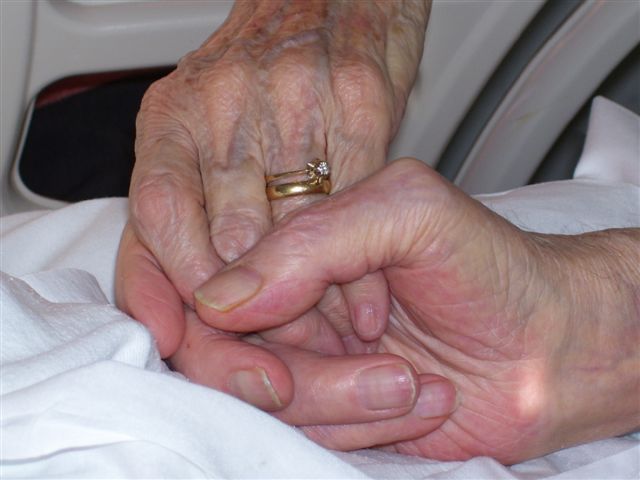 My father holding my mother's hand the day before he died

God granted her 93 and a half years of life, 63 years of marriage, and six children, as well as numerous grandchildren and great-grandchildren. She loved all of them, sometimes too much so, perhaps, in a smothering way. And all who knew her loved her. Her's was a good life but not a good death.

Her zest for life -- at least the limited one that still remained -- did not permit her to contemplate suicide. While some of my siblings might dispute some of my claims about her, I want to retain my own memories of our mother. She was not perfect -- after all, who of us is?

But she did have a strong faith, as did my father. That was what led them to emigrate to Canada in 1951. Their emigration allowed my siblings and I to get an education. But most important, they passed on their faith. Parents sharing their faith with their children. There can no greater gift than that!

Even though she wanted God to end her suffering swiftly, my mother did not contemplate suicide, unlike Hamlet whose long soliloquy is focused, as is often claimed, on the thought of taking his own life. He is struggling with the issue of life and death -- the same issue we all must deal with. My mother struggled with that issue as well. 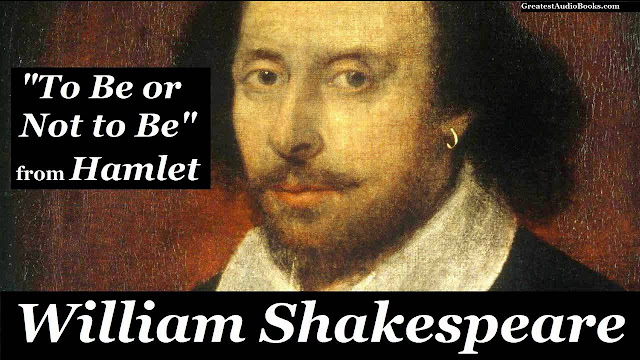 Listen to Hamlet as he poignantly voices the issues involved:


To be, or not to be? That is the question—
Whether ’tis nobler in the mind to suffer
The slings and arrows of outrageous fortune,
Or to take arms against a sea of troubles,
And, by opposing, end them? To die, to sleep—
No more—and by a sleep to say we end
The heartache and the thousand natural shocks
That flesh is heir to—’tis a consummation
Devoutly to be wished! To die, to sleep.
To sleep, perchance to dream—ay, there’s the rub,
For in that sleep of death what dreams may come
When we have shuffled off this mortal coil,
Must give us pause. There’s the respect
That makes calamity of so long life.

In brief, for Hamlet death is something he earnestly desires -- it is devoutly to be wished. In his opinion, it nothing more than a sleep. However, there’s a catch, a rub or obstacle, as he calls it. The problem is that life after death is unknown and could be even worse than life. It’s a frightening thought for him.

This obstacle has a religious dimension: it is a sin to take one’s life. For this reason, the fear of the unknown, of what will happen after death, is intensified. He realizes too that death will deprive him of the action he must take: to revenge his father's death. Hence his doubts. 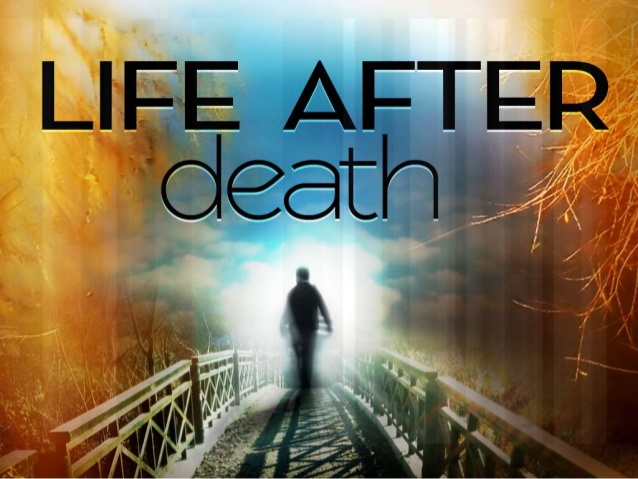 For my mother there was never such existential doubt. Her faith is evident in the text she chose for her funeral was Ephesians 5:18b-20:

Be filled with the Spirit, speaking to one another with psalms, hymns and songs from the Spirit. Sing and make music from your heart to the Lord, always giving thanks to God the Father for everything, in the name of our Lord Jesus Christ.

Singing and praising God was her joy in life and that is what she saw herself doing too after her death. For her, "death has been swallowed up in victory," as the Apostle Paul writes in I Corinthians 15. That is why she wanted to give thanks to God for the victory over death we all enjoy through our Lord Jesus Christ.

There was no real doubt in her mind of this victory even if the all too human fears that we all have did arise at times; fears that Hamlet too expressed in this famous soliloquy. Therefore it is so sad that she had to suffer the way she did for so many years. 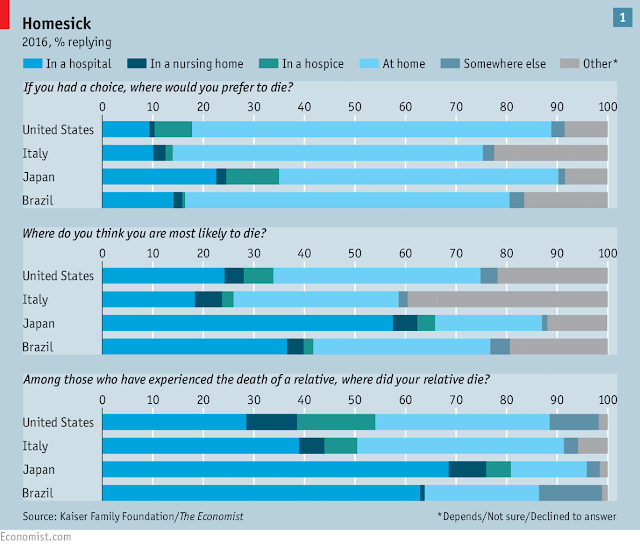 Why was she denied a good death? The answer lies not so much in an investigation of God's will, but it lies more in the way our society deals with death through refusing to provide the proper palliative care that all of us deserve. People should not have to die in hospitals, like my father did, nor in nursing homes, like my mother.

People should be allowed to die at home surrounded by loved ones. They should not die alone or only in the company of strangers. The Economist has provided an excellent survey of the problem that all of us will face some day: how can we experience a good death?

A good death is one in which suffering is reduced as much as possible and in the presence of loved ones. The reality of death is already terrifying enough without the suffering that too often accompanies it. My parents deserved better; all of us deserve better.

Let's begin by openly and honest addressing the question of death. As the article concludes, "Death will remain terrifying for many people. Unless the way health care is organised changes, most people will continue to suffer unnecessarily at the end."