Towards a nuclear-free world 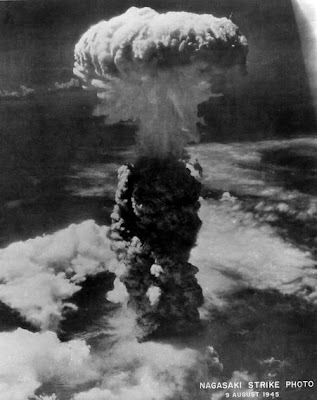 At 8.15 am, on August 6, 1945, the first nuclear bomb was dropped in warfare on Hiroshima, Japan. This bomb had the 12.5 kilotons of TNT, and exploded at a height of 580 m. (1,885 ft.). Hiroshima, located about 800 km. (500 miles) from Tokyo, was selected in order to impress the Japanese government with the destructive power of the bomb. Kyoto was also considered, but its unrivaled beauty ruled it out. 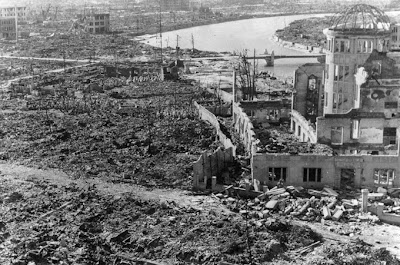 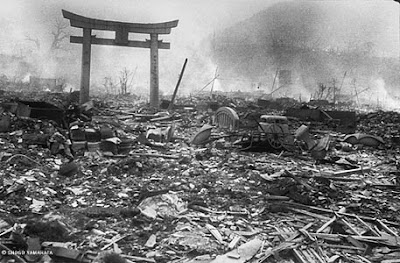 On August 15 Japan surrendered. That was sixty-six years ago. The constitution of Japan today does not permit the stationing of nuclear weapons on Japanese soil as part of Article 9, by which Japan renounces war as a sovereign right. Japan does not maintain any armed forces, but does have a de facto force, called the Japan Self-Defense Forces, which are technically part of the national police. 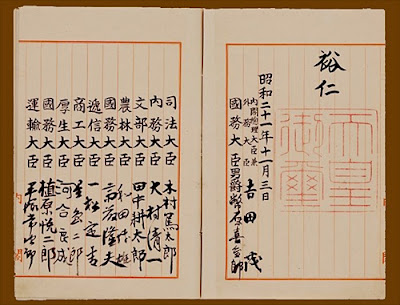 Signing page of Japanese Constitution
By the end of that year, in Hiroshima about 140,000 people had died, some in the explosion and others due to radiation and injuries. In Nagasaki about 80,000 died. 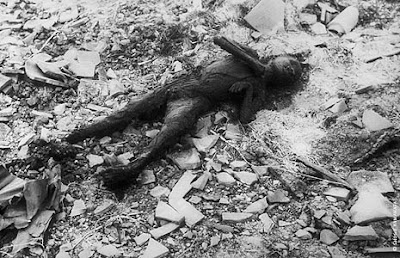 Almost half a year ago, following a 9.0 magnitude earthquake and tsunami, the Fukushima Daiichi Nuclear Power Plant experienced a series of equipment failures, nuclear meltdowns, and release of radioactive materials.
An international expert in nuclear power plants has described Fukushima as "the biggest industrial catastrophe in the history of mankind." Japanese officials intially assessed the accident as Level 4 on the International Nuclear Event Scale (INES), but that was later raised to 5 and eventually to 7, the maximum. 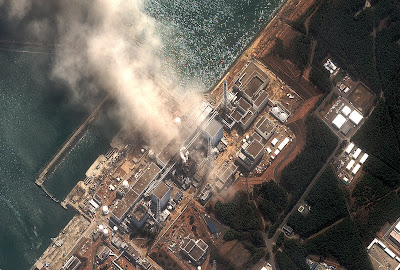 The Japanese government has disclosed that the plant would be decommissioned, but this would be expensive and require many years to accomplish.
At least 85,000 people were evacuated from the area around the plant. The danger of radiation leakage is a constant one.
It is estimated that a full-scale cleanup would require at least 30 years. The ground contamination will be of concern for several decades, especially to those who will be involved with the actual cleanup.
Prime Minister Naoto Kan of Japan in his speech at the memorial service to mark the 66th anniversary of of the bombing of Hiroshima mentioned the Fukushima accident and used it to reiterate his intention to to pursue a society not dependent on nuclear power. This comment, however, may be just his own personal opinion.
A Japanese government guideline, which exists so far only in draft form, calls for reducing the nation's dependence on nuclear power. This guideline was meant apparently to modify Kan's intentions.
Kan's linking of the Hiroshima and Nagasaki bombings with the Fukushima accident, and his declaration yesterday about ending Japan's dependence upon nuclear power reveal the growing debate about nuclear power in Japan.
On one side is the prime minister, who probably enjoys a large measure of Japanese and international support on the occasion of the Hiroshima memorial service, while on the other side are those in Japan, and perhaps elsewhere in the world, who feel that nuclear power is essential for economic reasons.
The advocates for nuclear power would contend that all that needs to be done is to bring the nuclear crisis to an end and to enhance the safety of its nuclear power plants.
But that argument is fallacious. It is tantamount to arguing that the same technology that created the current nuclear mess will also be able to save the world from any further consequences.
Our faith in technology and our economistic view of the world lie at the root of the problem. Prime Minister Kan, in contrast, is injecting a note of sanity into an otherwise insane world.
In my opinion, not only Japan but also all those nations that possess nuclear weapons or that make use of nuclear power should use the opportunity offered by the memorials this week to move decisively towards a nuclear-free world.
Both nuclear weapons and nuclear power are perilously connected. Just to mention the most obvious, the disposition of nuclear waste, whether from decommissioned weapons or power plants is fraught with dangers, not least of which where to dispose of elements that will be radioactive yet for hundreds of thousands of years. If this is not insanity, what is?
Why do we need such powerful weapons of mass destruction? 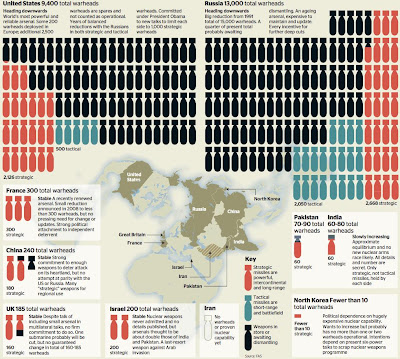 Click to enlarge
Compare this with the bombs that were used during World War Two. 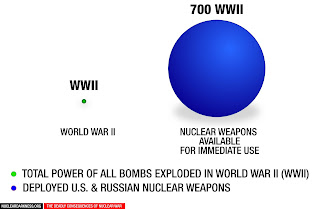 After Three Mile Island, Chernobyl, and now Fukushima, the inherent danger of living near a nuclear power plant should be readily apprent. Those who want to live anywhere nearby today are crazy. Not only their own lives are in danger but also those of their children and grandchildren.
In a future post, I will argue that the just war theory is no longer tenable, in large part because of nuclear weapons. The world already possesses too many nuclear weapons. Examine the current inventory. 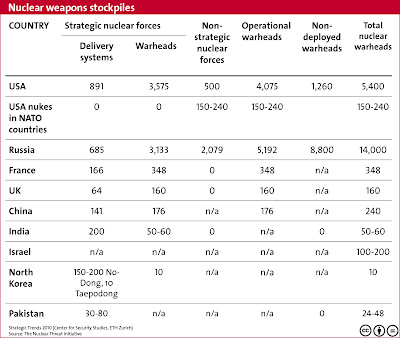 Click to enlarge
Nuclear power is also unacceptable. Renewable energy is the only route to go.
Recently, I had a closeup view of some wind turbines in operation. They were not noisy, nor do they pose the dangers some people argue they present.
I consider them beautiful. They are certainly more beautiful than nuclear power plants. 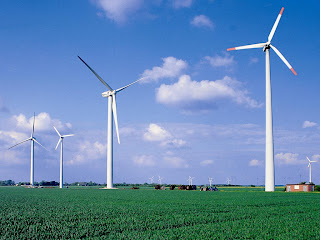