Trump, Trudeau, and the spirit of Christmas 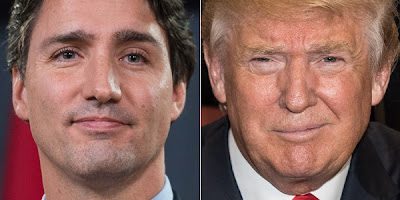 As 2015 draws inexorably to an end, it is time for me to reflect briefly on two of the most noteworthy politicians in North America. I use the word "noteworthy" cautiously since many people may question whether Donald Trump is truly worthy of note. In contrast, Justin Trudeau well deserves this accolade. I will close with some remarks on Christmas, especially as it relates to how these two men demonstrate the Christmas spirit and what it means to be a Christian politician today.

I picked North America since that is where I live and where this year I have had a frontrow seat watching these two men, only one of whom, strictly speaking, is a politician. The other is a wannabe politician. These men have much in common, yet there are also crucial differences. It is these differences that come to the forefront during this Christmas season.

Trump needs little introduction. This bombastic and narcistic billionaire has the whole world in a tizzy. Not only Americans but also people everywhere are anxiously watching the Republican race to select their presidential candidate for the election next year.

If much of the world cringes at the prospect, millions of Americans support him. In national polls, he currently holds the lead with 34%. This is true in nearly all categories, except for Tea Party and "very conservative" voters where his support drops two percent. In a recent poll in New Hampshire, his support rose to 39%.

Remarkably, Trump's support did not collapse after he announced support for a ban on Muslims entering the US. That position is highly popular within the GOP; more than 50% support Trump's proposed Muslim ban. Among Trump's own supporters there is 82% support for it while slightly less than 50% support a national database of Muslims. But only 28% of GOP primary voters go so far as to think mosques in the United States should be shut down. 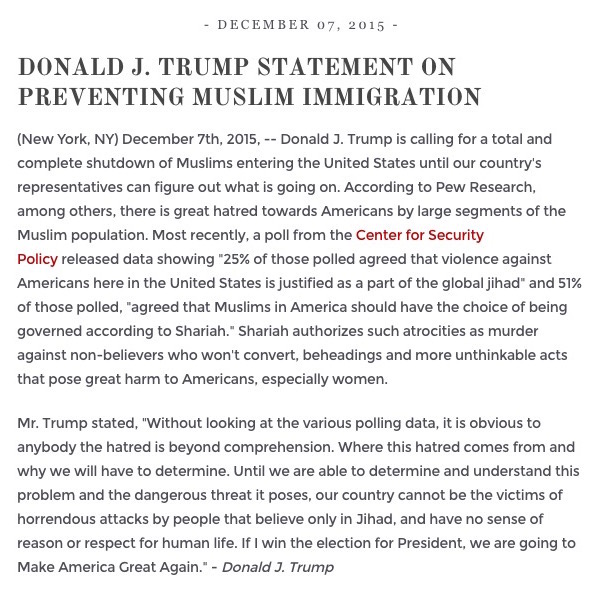 What many of his supporters don't realize is that Trump has changed his position on many issues. For example, he used to be pro-choice, now he is pro-life and opposed to abortions. Similarly, his position on gun control has intensified.

How this opportunistic, misogenistic, Islamaphobe can receive such widespread support illustrates the malaise that has gripped the US. The NRA speaks for a majority of American with 58% having a favorable view of this organization. Sadly, too many Americans have bought into the idea that guns are necessary for self-defense, whereas there is overwhelming evidence in other countries to the contrary.

If Trump -- God forbid! -- does achieve the presidency, I expect some Americans will want to flee to Canada. Since Canada is now favorably inclined to accept refugees, they will be welcomed with open arms. However, I have just one piece of important advice: leave your guns at the border. Guns are not welcome here.

Trudeau, whose surname begins with the same three letters as does Trump's, is a bird of a different feather. In the federal election in October, his opponents from both major parties dismissed him as "not yet ready." What they overlooked is that Trudeau learned about politics on his father's knee. Pierre Trudeau served as the15th Prime Minister of Canada from 1968 to1979, and again from 1980 to 1984.

Trudeau does not have Trump's billions, but he is a multi-millionaire. Admittedly, both men inherited much of their wealth. Unlike Trump, however, Trudeau is a politician: he was elected to the House of Commons for the first time in the 2008 election. Although not as seasoned a politician as his father, he can claim that title better than Trump, who has never held an elected office. 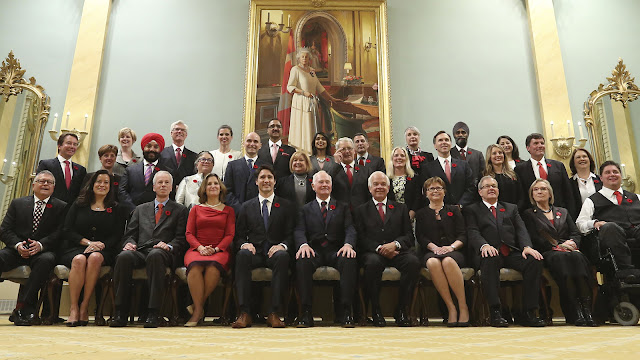 Trudeau and his new (and diverse) cabinet at the swearing in ceremony, November 4, 2015

Trudeau displayed his political skills by moving the Liberal Party, of which he is the leader, to the left of the NDP, which is Canada's mildly socialist party. The NDP aided this shift by advocating a balanced budget during the election in order to ward off the stigma that the NDP has had of being profligate when it hasa been in power provincially.

Very few people in Canada initially predicted a plurality for Trudeau's Liberals, much less a majority. They won 184 of the 338 seats, with 39.5% of the popular vote; a gain of 150 seats compared to the 2011 federal election. This gain was the biggest numerical increase for a single party since Confederation, and marked the first time that a party had rebounded from third place in the Commons to a majority government.

The Canadian Press just named Trudeau as Canada's "Newsmaker of the Year." Unlike the hard-fought Oct. 19 election, this wasn't much of a contest. He was the runaway choice of news editors and directors across the country. This award speaks volumes about Canada's new prime minister and his politics.

Trudeau's electoral success has been credited to his performance both on the campaign trail and televised election debates exceeding the lowered expectations created by Conservative advertisements. He made many promises durin the election, many of which will be difficult to implement, especially those on electoral reform and the many recommendations of the Truth and Reconcilation Commission. 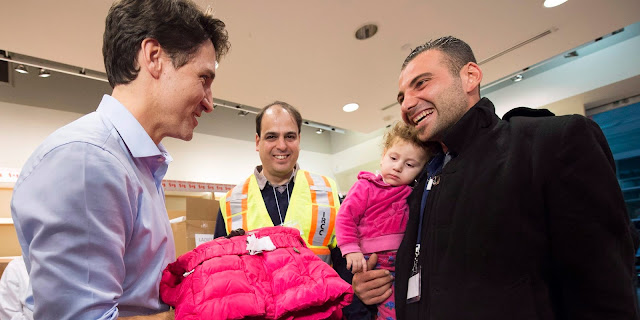 There is now a new tone in Ottawa that differs markedly from that of the previous Conservative government which was marked by divisiveness and the politics of fear. Former Prime Minister Stephen Harper had taken a page out of the playbook of the Republicans (especially Donald Trump) in the US in order to win reelection.

But Canadians soundly rejected the politics of fear and opted instead for the "sunny ways" of Trudeau. This phrase was first used 120 years earlier by former Prime Minister Wilfred Laurier and became synonymous with his political style. Trudeau has now adopted it as the slogan for a new era in Canadian politics.

The contrast between Trudeau and Trump is striking. While Trump would not accept any Syrian refugees because they might be terrorists, Trudeau welcomed the first plane load to Canada at the airport in Toronto. While the passengers on that plane were Christians, who could more easily and quickly pass the screening process, future planes will be filled with Muslims. No doubt Trump and many Americans would be horrified, but this is Canada.

Welcoming refugees is part of the DNA of Canadians. While Canada has not always welcomed them -- think of the boatload of 907 Jewish refugees who were turned away in 1939 -- it has done much better, especially with the Vietnamese boat people beginning in 1978 and continuing until the early 1990s, as well as many other groups over the years.

The Conservatives did everything they could to discourage the reception of refugees, but this changed with the new Liberal regime. Now Canadians express their pride once more in being a welcoming nation. Many have volunteered to sponsor families or individuals and have been extremely generous in providing housing and the necessary funds for the resettlement of refugees. 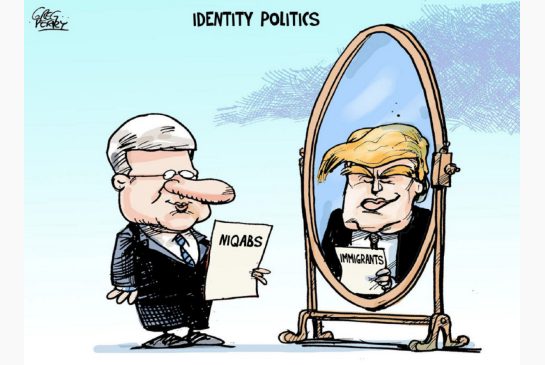 Trudeau has captured the hopes of Canadians and helped to make them a reality. This is in the spirit of Christmas, which celebrates God's gift of his Son in order to restore his creation. Christ's incarnation is the greatest example of love that the world has ever experienced: "For God so loved the world  that he gave his one and only Son . . ." John3:16. Our response should be similar: a display of love for our neighbors, whether they live nearby or far away.

Trudeau's birthdate may have contributed to the spirit that pervades his government: he was born on December 25, 1971. Trudeau's father was a devout Roman Catholic, but Justin describes himself as a lapsed Catholic; he was baptised and attended mass regularly as a child, but now no longer attends church, except perhaps on special occassions.

In spite of this, Trudeau better expresses the love for the neighbor that Christ commands from his disciples than Trump, who was baptised in a Presbyterian Church and claims that he is Presbyterian, although he has also stated that he attends Marble Collegiate Church (which is part of the Reformed Church in America); this is where he married his first wife. That church, however, does not consider him an active member.

While it is dangerous to judge Trudeau and Trump as to which best personifies the spirit of Christmas, I would conclude that Trudeau wins hands down. Not only in his response to the refugee crisis but also in the other policies that he has enunciated and vows to implement Trudeau behaves as a Christian. The same cannot be said of Trump. They may both be Christians who do not actively attend church, but their behavior indicates where their faith truly lies.

Many Canadians, whether they or Christians or not, identify with the generous spirit of Trudeau and his government and reject the fearfulness that Trump generates. They rejected Harper when he used the same tactic, and sent him and his party out to pasture.

I hope and pray that Americans will reject Trump and his deplorable politics. How can any American who is also a Christian support this man whose words and behavior are the antithesis of what it means to be a follower of Christ? Christ would not approve of what Trump is currently saying and doing. "By their fruits you will recognize them" (Matthew 7:16).

I wish every one of you a blessed Christmas!