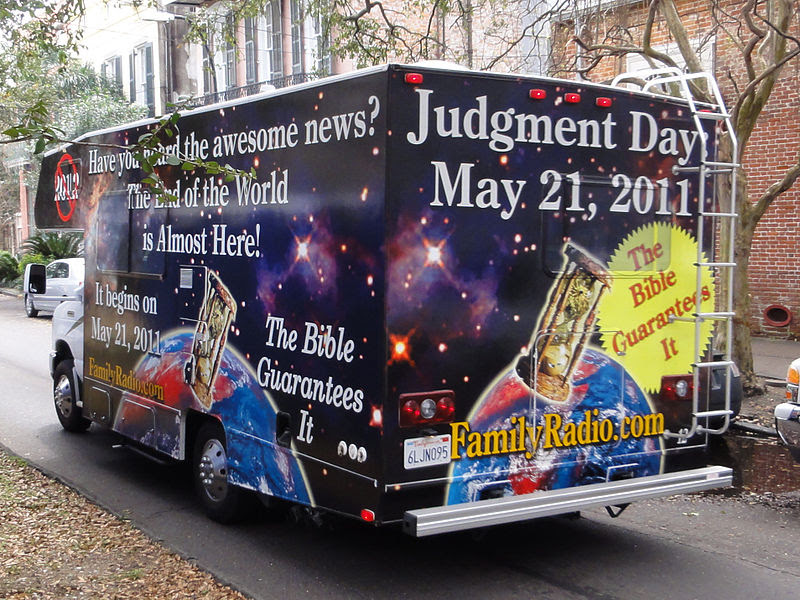 Judgment Day, May 21, 2011, reads a poster that is held up by someone on a photo in my local newspaper. There is also a full-page ad with this title in the same paper. This message appears as well on an RV, bearing California plates (see photo). This, it is claimed, is the day of the rapture, when Jesus will return to rescue all who believe in Christ. All those who do not, however, will be damned, which here does not mean consigned to hell, but annihilated entirely. Five months later, on October 21, God will destroy the earth and the entire universe. In the intervening months, the world will experience the most severe earthquakes and natural disasters ever. And all this will start at 6pm, local time, on May 21.
Harold Camping, a Christian radio broadcaster and the head of Family Radio, which has about 150 outlets in the US and elsewhere in the world, made this prediction. He previously predicted that the rapture would occur on September 6, 1994, although he did allow at the time that he could be wrong. But he has not expressed any similar reservations this time.
Camping has many followers all over the world. One of them spent a large part of his life savings on a thousand advertising posters throughout New York City, proclaiming this day of judgment. Other followers have paid for similar ads in numerous newspapers.
Camping was for much of his life a member of the same denomination that I belong to, but since then he has departed far from its theology, especially regarding his understanding of Christ's return and the doctrine of annihilation, that those who do not believe in Christ will be totally destroyed.
Camping claims that all churches and denominations have become apostate. Family Radio, however, is not a church, although it does encourage careful Bible study. Such study is what convinced him and his followers to be able to date Christ's return accurately to this precise date. The arithmetic involved is complicated, and not entirely convincing, at least to me. In a similar fashion, Camping has precisely dated the creation of the world and the flood at the time of Noah.
On the radio I just heard that Camping refuses to be interviewed about this judgment day. "Ask me on Sunday," he reputedly said, "but I won't be there."
I am writing this post before this event. I do believe that the world will end one day, but but I reject Camping's position for several important reasons:
1. I don't believe in the rapture as Camping understands this event. If by rapture, one means that Christ will return one day, then I do agree. But not, as Camping asserts, in the sense of Christ coming to rescue only those who believe in Christ. According to him, this is a very small group of people. By the calculation of some, about 200 million people. These true believers are not found in the existing churches. In contrast, I would follow Operation World and peg the percentage of people who are labelled Christians much higher: about 33%. Admittedly, my definition of a Christian is much wider.
2. I believe that no one can predict precisely when Christ will return. The newspaper ad mentions some of the biblical texts that are often used by those who reject Camping's system of dating. But no one, not even Christ when he was still here on earth, knows the exact time of his return. God does provide signs, but these serve to warn us what he intends to do, not give an exact timetable. Camping refutes this. If you want to follow his reasoning, go to the relevant part at www.timehasanend.org.
3. I reject the doctrine of annihilation. When Christ returns, God will not destroy the world, but he will restore it and will make it even better than the original creation was. Because of the fall, God is busy with the creation working towards a world that would otherwise not have been possible. I will write more about what God is doing with his creation in a future post.
How Harold Camping will respond, if the rapture does not take place on May 21, only he knows.