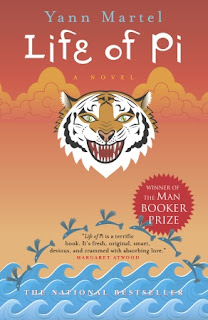 One of the advantages of being laid low with sciatica is the opportunity to do some extra reading for this blog as well as read a few novels. The most interesting novel I have come across for a long time is by Yann Martel, a Canadian, who won the Man Booker Prize and several others awards for Life of Pi.
This post is not intended to be a new review of this book, since it is already too old to merit another one. It is, however, a  most unusual novel. President Obama reputedly loved it. In this novel, God, faith and animals all play significant roles, as indeed they do, or ought to, in real life. Martel is a master storyteller, who makes the remarkable believable.
The purpose of the story, as Martel explains in the introduction, is to "make you believe in God." The narrator, Pi (as in 3.142, but an abbreviation for Piscine) Patel, a 16 year-old Indian boy, certainly does. His search for God leads him to become, at one and the same time, a Hindu, a Christian, and a Muslim. Pi's brother mischievously suggests that. if Pi should become a Jew and a convert to three other religions, then he could be on holiday for the rest of his life.
Pi prays to God, as personified in each of his three faiths, especially when he is marooned on a lifeboat in the middle of the Pacific Ocean, together with a 450-pound Bengal tiger (named Richard Parker, but don't ask why). Pi provides a daily schedule in which prayers are central. His faith is a profound example to a world that is divided by religion. While I do not endorse Pi's syncretism, he has found a way to unite these faiths that suggests that the search for truth does not have to end in the either/or alternative posed by most religions, but can be resolved as both/and. To use another image, truth can be seen as a white light that can be broken up into its spectrum of which each religion possesses only a part. Pi quotes Gandhi: "All religions are true." And thus he confesses to his parents about his spiritual struggle, "I just want to love  God." Who can argue with that?
This lifeboat part of the story is the most fantastic. It is Noah's Ark with a fatal twist. It starts with the sinking of a Japanese ship which holds many animals that Pi's father is bringing to zoos in North America. Most of the animals die, as do Pi's parents, when the ship sinks. But a spotted hyena, an orange-colored orangutan, and a zebra with a broken leg also survive and end up on the lifeboat. They are soon eaten, however, by the tiger. Pi is able to survive for 227 days by training the tiger. Pi is the alpha male who reduces the tiger to the omega. But God clearly was with Pi, who lists among the occupants of the lifeboat: "1 God."
Pi learns to eat everything in the ocean, whether fish or birds--all of it raw. If humans are to survive on this planet we must learn to utilize all the food that is available. Pi collects rain water and even distills it. He feeds the tiger and provides it with water. Eventually the lifeboat arrives in Mexico, where Pi is interviewed by some Japanese men on behalf of the owner of the sunken ship. They cannot believe his story, but when Pi tells them a version in which there are no animals, they have to admit that the animal version is better. Animals are essential too in the real world. As human beings we must share this world with animals (and not by putting them into zoos). Enemies of whatever type,  even religious, must learn to share. There is only one world, just as there is only one God. Why can't we share both, as Pi did.
This world is a dangerous place. The author is under no illusion about that. This is not utopia. It is a world where a young man can survive, but only because he is intelligent and is not squeamish about what he eats. Nevertheless, Pi does not lose his humanity.  On the contrary, he becomes more fully human. He is Noah. But is it too much to also see Pi as a Christ-like figure? Pi saves the lifeboat even though the only occupants left at the end are Pi and the tiger. The lifeboat is a microcosm of the world. This world needs salvation, although it often does not realize it. Instead, the world is intent upon exterminating everyone and everything else. Does the tiger perhaps symbolize that part of human nature?
Several countries are listed in the novel, especially India, France, Japan, Mexico, and Canada. where Pi ultimately settles, and attends the University of Toronto, taking a double-major for his Bachelor's degree in zoology and religious studies. He describes his fellow religious studies students as "muddled agnostics" who were "in the thrall of reason." His fellow zoologists get off a little better, as "friendly atheists" who were preoccupied especially with "sex, chess, and baseball." He concludes elsewhere that atheists can still be saved at the last minute, but there is no hope for agnostics. Some rather astute, if severe, observations.
Life of Pi is a novel, not reality. It is a 350 page parable about life, God, faith, animals, and the world. Although this is not a review, nevertheless I must say that I am impressed by this deeply religious novel; it is religious because of the way all these factors or actors interact. Dare I say it? It is even a Christian novel.
Religion does play a role in the world today. That is one reason why I am writing this blog and now include this posting.