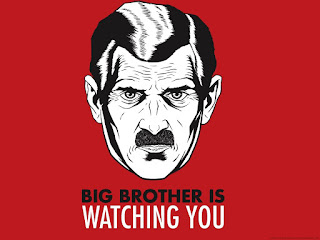 In 1949 George Orwell published 1984, a dystopian novel that introduced "Big Brother," the tyrannical ruler of a totalitarian state where everyone is under constant surveillance, and the phrase, "Big Brother is watching you." Big Brother has since then become synonymous with the abuse of government power, the loss of civil liberties, and specifically mass surveillance. The title is probably an inversion of 1948, the year it was written.

Now, decades later, mass surveillance has apparently become a reality in the United States and maybe many other countries, according to the revelations made by Edward Snowden, a 29-year-old high school dropout and former National Security Agency analyst. He leaked some of the NSA's most precious secrets: how it is compiling and storing lists of domestic phone calls and accessing huge volumes of emails and other electronic data that can originate anywhere in the world.

Daniel Ellsberg calls this the most important leak in the history of the US, including his own release of the Pentagon Papers.  Ellsberg leaked these papers to end what he regarded as a "wrongful war."

When Snowden made these disclosures, he was holed up in a hotel in Hong Kong, but he is now on the lam.  At last report, he is still in Hong Kong. He sacrificed his salary, girlfriend, family and home. He may also lose his freedom. The US is looking for him so that it can extradite him and put him on trial.

Snowden boldly declared, "I'm willing to sacrifice all of that because I can't in good conscience allow the US government to destroy privacy, Internet freedom and basic liberties for people around the world with this massive surveillance machine they're secretly building." See also the video interview. 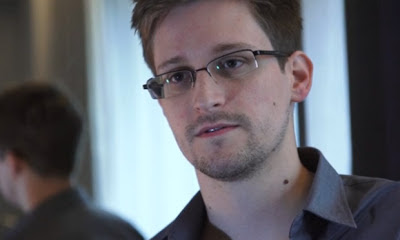 What will happen to Snowden or whether he will become a hero or not only time will tell. What he has accomplished so far is to reopen the debate on national security versus personal privacy. To judge by the editorials thus far, people are taking sides. President Obama has already stated, "I welcome this debate and I think it's healthy for our democracy." The intelligence community, however, thinks otherwise.

Public opinion too is divided. About 62% of Americans say it is important for the government to investigate terrorist threats, even if that intrudes on personal privacy, while 56% consider it acceptable for the NSA to access American telephone records, and 45% want the government to go further and monitor everyone's internet activity.

Since 9/11, the American government has increased the surveillance not only of foreigners but also Americans in order to curb terrorism. At first secretly but increasingly openly civil rights have been revoked. In particular, the fourth and fifth amendments of the US constitution, which safeguard citizens from unwarranted intrusion by the government into their private lives, have been virtually suspended.

Is such intrusion into the lives of ordinary American citizens justifiable in order to protect society against terrorism? That is the issue that will be debated for a long time. Many people will continue to argue that, especially after 9/11, and more recently the Boston Marathon bombing, the threat of an attack by al Qaeda on American soil requires aggressive intelligence gathering.

However, does that include mining the phone calls and emails of ordinary citizens, who are not suspected of any subversive activity? Even with effective congressional supervision, which does not seem to be the case currently, can such aggressive tactics be justified? Some lawyers argue that this data-mining is illegal.

What is left of personal privacy? Admittedly today, the extensive use of social media, has left large segments of the population totally exposed. They have sacrificed much of their privacy in the name of friendship. But should the last shreds of privacy be torn away from them?

Not only are American citizens involved in this data-mining but also the citizens of many other countries where stricter laws regarding the extent and means of surveillance prevail. If this information is passed on to these other countries, does that not possibly break their laws?

Is there any evidence that this surveillance thus far thwarted any terrorist plots on US soil? If it has, then that might sway public opinion further in supporting such surveillance? Admittedly, not all such evidence can be made public, so as to protect sources, but surely enough can be to explain why such extensive surveillance is necessary.

What will eventually happen to the person who leaked these secrets? If Snowden is caught and is alive, will he be jailed like Brad Manning, without bail and incommunicado?

I am only raising a few questions now. I do not have many answers, although my sympathies are readily apparent. I am not an expert in security matters. I am not even an American. But I too am affected, since my very innocent phone calls to my daughter in Massachusetts have no doubt have been logged, and so have my emails, even if sent to people here in Canada, since much of that traffic goes through American hubs.

There are many more questions that can and should be asked about this surveillance. which has gone on for a long time already, although perhaps not on the current scale. Thus all these questions need to be asked and a public debate initiated as soon as possible.

In camera discussions in the name of national security should not be tolerated. Unless an open and public debate is initiated, this surveillance will only increase. No one wants the US to become a totalitarian state where Big Brother controls everyone through mass surveillance. Would you want to live in such a state?

In Canada, surveillance has been common for almost a decade, although it has been repeatedly denied. The Communications Security Establishment Canada has tracked internet and phone data since 2005, with only a short interruption, in order to thwart terrorism. 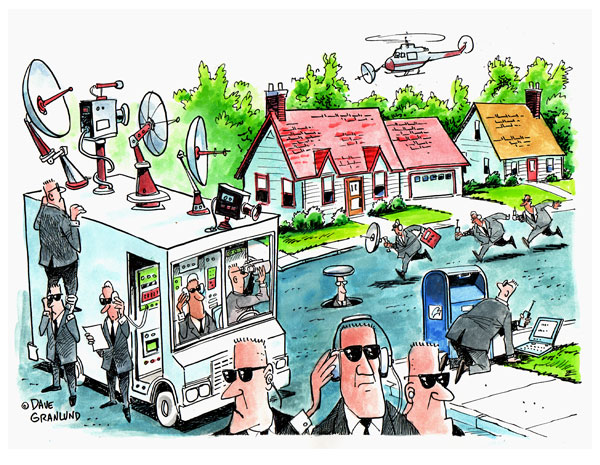 Also, I am concerned as a Christian that the God who, among other things, sees everything would be viewed by our society as the Big Brother who has everyone under constant surveillance. That would seem to diminish the God that I worship. He is a loving God who desires our love in return. In contrast, Big Brother is neither loving nor does he ask for love. He only wants to know what we are doing.

In addition, I want to put my trust in God, who has promised to protect me, not in government agencies that are motivated by fear and will do anything they can to remove that fear. In a previous post, I wrote about "The 'terrorization' of life". By that I meant that our lives today are increasingly shaped by fear. I want to conclude by quoting the last few sentences of that post.

We must not permit our lives to become terrorized. Thus we must not give in to the fears that others have induced in us. If that happens, the terrorists who plant bombs and attack us in other ways will have won. Then they will have achieved their goal. We must never allow that to happen.

The Bible teaches an important lesson in 1 John 4:18: "There is no fear in love. But perfect love drives out fear." Let us love one another and cast out those fears.