"Moving into the neighborhood": Humbly incarnating ourselves in the world 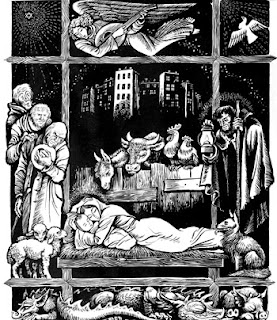 Towards the end of an eventful and challenging year I am taking a break from politics (more or less) and offer a few personal reflections on what it means to be a Christian in the world today. This is a plea for more humility on the part not only of believers everywhere but also of those who profess not to believe in any god. The latter blame religion for the world's problems, little realizing that they too in their arrogant claim are part of the problem. Atheists are just as guilty of this as anyone else.  A generous dose of humility on the part of all of us would go a long way to provide healing for the world's problems. Humility, not arrogance, is needed.

Christmas is when Christians celebrate the incarnation of Jesus Christ. The Son of God humbled himself by becoming human. This season is the most appropriate occasion to reflect on his incarnation as an expression of the meaning of Christmas. and thus what we ought to be doing in the world in which we are living.

I wrote previously that Christ came to restore the creation. Now, I need to explain that in order to do that Christ first had to incarnate himself by becoming human. Incarnation for him meant an enormous descent: he came down from heaven, and when he came to earth he "moved into the neighborhood" (John 1:14, The Message).

The Apostle Paul described Christ's incarnation in the form of hymn in which he urged his readers, among other things, to imitate what Christ did (Philippians 2: 5-8, The Message):

Think of yourselves the way Christ Jesus thought of himself. He had equal status with God but didn't think so much of himself that he had to cling to the advantages of that status no matter what. Not at all. When the time came, he set aside the privileges of deity and took on the status of a slave, became human! Having become human, he remained human. It was an incredibly humbling process. He didn't claim special privileges. Instead, he lived a selfless, obedient life and then died a selfless, obedient death -- and the worst kind of death at that -- a crucifixion. 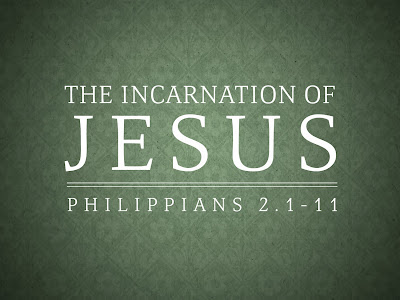 Incarnation, in our case, does not mean that we can humble ourselves the same way that Christ did. His descent took him from heaven to earth and eventually to the cross where he died for the sake of the whole world. We are already human and we already live on this earth, thus our descent is minimal in comparison.

Rather, incarnation for us involves humbling ourselves in imitation of Christ. Humility is something difficult for most of us. By nature we tend not to be humble, and we do not enjoy humbling ourselves. It runs against our grain. We all want to be praised for our accomplishments. Our desire is to become great -- at least in our own eyes and those of our acquaintances -- if not the whole world.

Christ did become great. He was glorified but this happened only after he had first humbled himself and had demonstrated his obedience. The previous biblical passage continues (Philippians 9-11, The Message):

Because of this obedience, God lifted him high and honored him far beyond anyone or anything ever, so that all created beings in heaven and on earth -- even those long dead and buried -- will bow in worship before this Jesus Christ, and call out in praise that he is the Master of all, to the glorious honor of God the Father.

There is only one avenue to true praise and that involves humility. Few people realize that, and thus they try to grab honor and praise in any way they can, even if that means stepping over bodies of others. All of us have witnesses this. Sometimes it happened to us; sometimes we have done it ourselves. 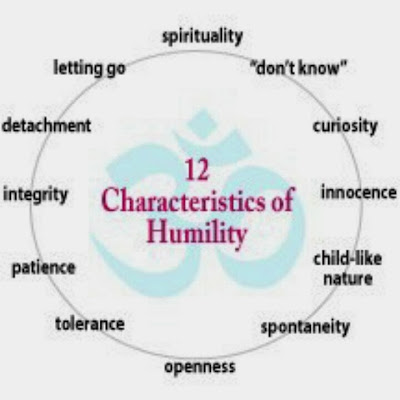 In the long history of the Christian Church, it is hardly surprising that among publicly acknowledged saints those who are remarkable for their Christ-like modelling of humility are rare. The Roman Catholic Church has hundreds of saints, but not all these men and women were noted especially for their humility. The Catholic criteria for sainthood is different, involving apparent holiness along with several attested miracles, but humility, with some notable exceptions, is not always mentioned.

There have been and still are countless unacknowledged men and women who have sacrificed themselves for their families and communities. These saints are often remembered only by God. They are the ones who have valiantly imitated Christ in their humility. Many of us try, but few of us exemplify the humility that Christ displayed. I say this not to shame anyone, but rather as a mea culpa, since I too have sinned in this regard.

But my admission of falling far short of this ideal does not deter me from pleading for all of us to display more humility in our behavior in the world. Christ is our standard. The Christmas season is an annual reminder not so much of our shortcomings but rather of the love of God that is portrayed in Christ's incarnation.

Yet many examples of Christ-like humility can be found today. Mother Teresa comes to mind immediately. In her work with the poor in what used to be called Calcutta, she too has "moved into the neighborhood." She was noted for her humility. The Roman Catholic Church has already beatified her, which is the third step to official recognition as a saint. 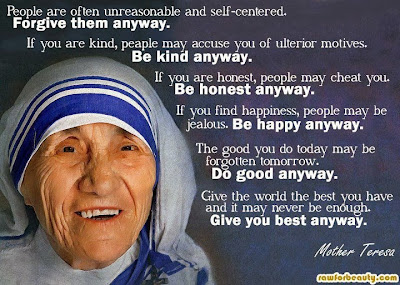 Pope Francis, who will no doubt be declared a saint some day, is noted especially for his concern for the poor. His humble lifestyle contrasts sharply with that of his predecessors,yet some of whom will soon be recognized as saints. His humility is genuine and incarnational. He has truly "moved into the neighborhood" and is changing the Roman Catholic Church in ways that no one expected when he was elected.

In the secular world, the late Nelson Mandela might also qualify for a shortlist of people who have displayed humility. He may have had his shortcomings, but no one can dispute his efforts on behalf of the black and colored people in South Africa who had been discriminated against by apartheid. Through his work he too has "moved into the neighborhood."  With no judgment implied about Mandela's faith, most of us would have to agree that Christians do not have an exclusive claim to modelling humility. Far from it sometimes.

Sadly, there are too many people who call themselves Christians, but whose behavior is anything but Christ-like. They need a reminder during this season of whose name they bear. A study a few years ago revealed that sexual and emotional abuse of spouses and children is especially prevalent among those who attended churches where patriarchy was commonly practiced. This was not a coincidence.

Because of their high visibility, politicians are very easy to blame when their lifestyle falls far short of even the minimal standards of society. This past year perhaps the most egregious example of someone who claimed recently that he had had a "Christ moment" -- whatever he meant by that -- was Toronto mayor Rob Ford who has shamed both his family and his city by his atrocious behavior. Worst of all, he may not even be fully aware of what he did. 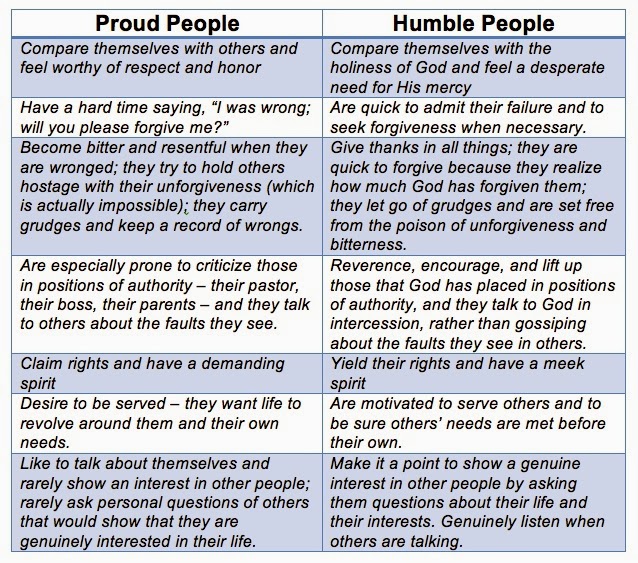 In the middle of the recent "Ice Storm" in Toronto (where I live) Ford claimed, "I am doing everything I can" to restore power to those who were still freezing and sitting in the dark after many days. He even handed out fridge magnets. He would insist that because of his popularity he too has incarnated himself, but his total lack of humility belies such claims. His arrogance and pride are constantly on display.

Ford is the modern anti-hero whose negative example should be a warning to all of us. Every country, of course. has its own version of Rob Ford. Fortunately, in a year or two I hope he will be largely forgotten, especially if the media would only learn to ignore him and those who are like him. Ford thrives on publicity.

Incarnation or "moving into the neighborhood" has nothing to with popularity, as Ford believes. Instead, it is based on giving oneself in deep felt humility to serving God in the world. That is something all of us can try to do, even if our humility is not as deep as it ought to be. Yet whatever we do in Christ's name can and will be used by God. He will bless it.

Our service is not limited to those occupations that some Christians have traditionally associated with serving God, such as the Christian ministry and missionary work. This was hammered into me already when I was still young. Such service includes every type of work that Christians are involved in, including manual labor. Do not forget that Christ was a carpenter in his youth. All work is dignified by God if it is done in his service.

What God does demand of us, however, is humility. That is something we tend to lose sight of.  Humility is the opposite of pride, and that is where we often fail in our striving to serve God. We cannot, it should be clear by now, incarnate ourselves in the world with proud hearts. That would be the antithesis of what Christ did and how he served God. Christ is the one whom we should imitate, but that requires more humility that many of us are able to muster. Yet that is what we must try to do.

Children while they are learning to walk will stumble and fall numerous times until they finally succeed. Even then they will remain unsteady for quite a while. In imitating Christ we will remain at the stumbling level all our lives. Nevertheless, God commands us to imitate Christ by incarnating ourselves in the world just as he did.

"Moving into the neighborhood" means humbly incarnating ourselves. This is no easy task, but God enables us to do so, even if our incarnation is imperfect and incomplete. That is the challenge that faces us as we enter the new year. 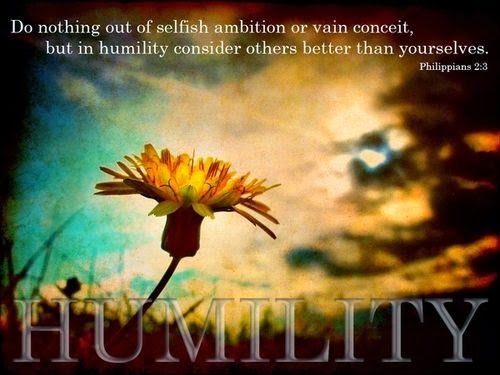 This post is more a meditation than a regular posting. My apologies if this offends anyone. When I try to relate faith and politics, I feel I must be free to discuss my faith. This is what provides a background to my discussion of politics. Even in this post I could not entirely avoid discussing politics. I need a yardstick when I talk about politics and politicians. Here I have provided one yardstick. I hope this has been helpful. And, as you no doubt noticed, I could not avoid politics entirely.