Corruption is pervasive everywhere in the world 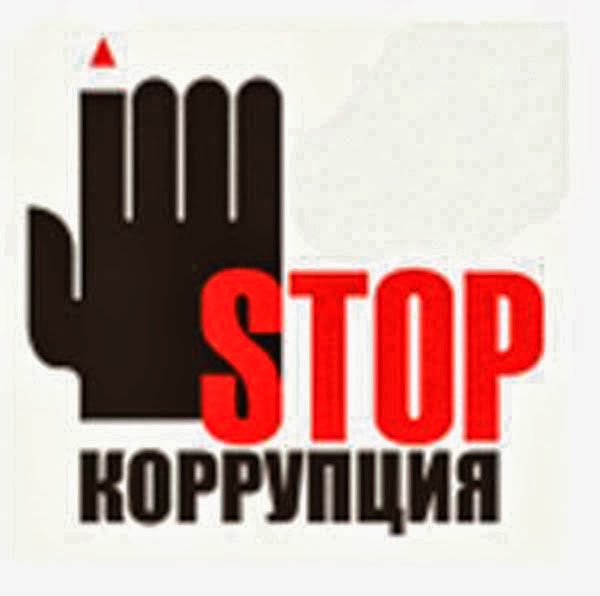 Corruption, and more corruption. That is the back story to the Sochi Winter Olympic Games. Even those who know very little about these Olympics have heard about the corruption that accompanied the preparations for the Games.

I have written about corruption previously, a little more than two years ago. In that post I pleaded for a stop to corruption. I was not so naive at the time, however, to think that my post would change the world and put an end to corruption. Nothing much has changed, nor it it likely to. My purpose was merely to inform. Corruption persists everywhere in the world, especially in Russia, as the Sochi Games illustrate so vividly.

This time I will not philosophize as much about corruption the way I did before. Nor will I catalog how extensive it is in Russia. That list would be very long indeed, although I will highlight a few examples from the Sochi Games. The Russians may not like that, but they have a lot of company when it comes to corruption. 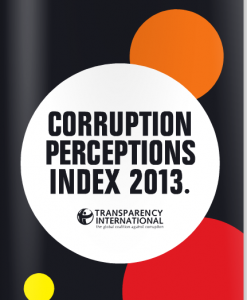 In this post I examine Transparency International’s Corruption Perceptions Index 2013 in order to show how pervasive corruption is throughout the world today. Russia provides a useful case study, and the preparations for the Sochi Games are a vivid illustration of how corrupt that country is.

This Index provides the best indicator of the extent of corruption in a particular country. That is why I am including the list in its entirety so that you will not have to follow a link. But you can easily see how extensive corruption is any country you choose, as measured by the Index. The Index provides a much-needed window on something most countries want to hide.

I have modified the formatting of the Index slightly, but all the figures have been retained and were not modified in any way. The entire report can be downloaded.

The scale has changed slightly from the 2011 Index, which used a scale from 0 (highly corrupt) to 10 (very clean). This is what I used in my earlier post. Yet, when I compare the two Indexes, it is apparent that many nations have for the most part remained in very similar places relative to one another.

The 2013 Index scores 177 countries and territories on a scale from 0 to 100. The report notes that no country has a perfect score, but that two-thirds of the countries score below 50. This indicates, according to the authors of the Index, a serious, worldwide corruption problem. The tentacles of corruption can be found everywhere in the world. 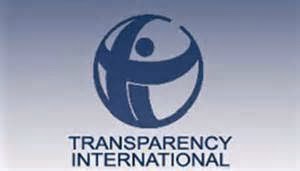 The Nordic countries, together with New Zealand and Singapore, occupy the top five spots on the 2013 list. North Korea, Afghanistan and Somalia share the last place. Russia is 128th on this list with a score of 28, which is rather dismal. It indicates that corruption is pervasive in that country.

That is hardly surprising. I lived in Russia for seven years, and taught philosophy and political science at Moscow State University. What was true then is still true: corruption, and more corruption.

The Sochi Olympic Games cost about $51 billion, which is more than four times the original estimate when Sochi was awarded the Games seven years ago. Corruption is the primary reason for these cost overruns. It is also the reason why not all the structures, especially some hotels, were not finished on time. 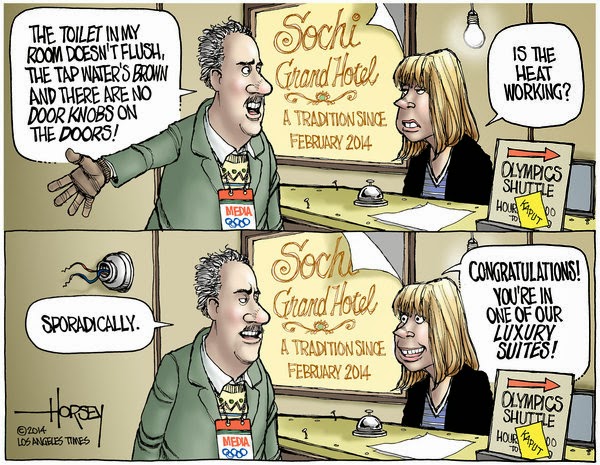 Corruption has contributed to the security problem that the Sochi Games are experiencing. The Russian government has not been able to deal effectively with dissidenta, except in typically heavy-handed fashion. This is especially true of terrorist groups that resort to violence. If the government had used the money wasted through corruption more usefully these groups might never have arisen. Instead, their needs could have been achieved through non-violent means.

A poll by the Levada research group found 47 percent of Russians believed the cost of hosting the Games has soared because funds have been embezzled or mismanaged. Only 22 percent said they believed officials or businessmen responsible for pilfering funds would be brought to justice after the Olympics, and 17 percent said they thought that Russia had bid for the Games mainly to boost Putin's image.

The Russian Olympic Organizing Committee, under the instruction of  President Vladimir Putin, awarded many of the contracts for the Olympic buildings and infrastructure to Putin's friends, most of whom had been his associates from his days in the KGB.

It is estimated that at least 20% of all these contracts were kick backs. This is massive corruption. If the pattern in many other countries also holds true in Russia, everyone in the food chain right up to the very top took their cut of that amount. As I noted in my post a few years ago, corruption can take structural forms. This is what makes it so difficult to eradicate.

My focus on the Sochi Games is because of the way they help to illustrate both the endemic nature and the extent of corruption in Russia. A handful of people have become scandalously rich indeed, while the majority of the population have not benefited from the largess that was disbursed so freely in the run-up to the Games.

Russia has many needs, but these cannot be met while corruption bleeds off the money that could help to alleviate these needs. Corruption can and does destroy nations. Russia is one example, but there are many more. And the forces that drive corruption are very powerful. 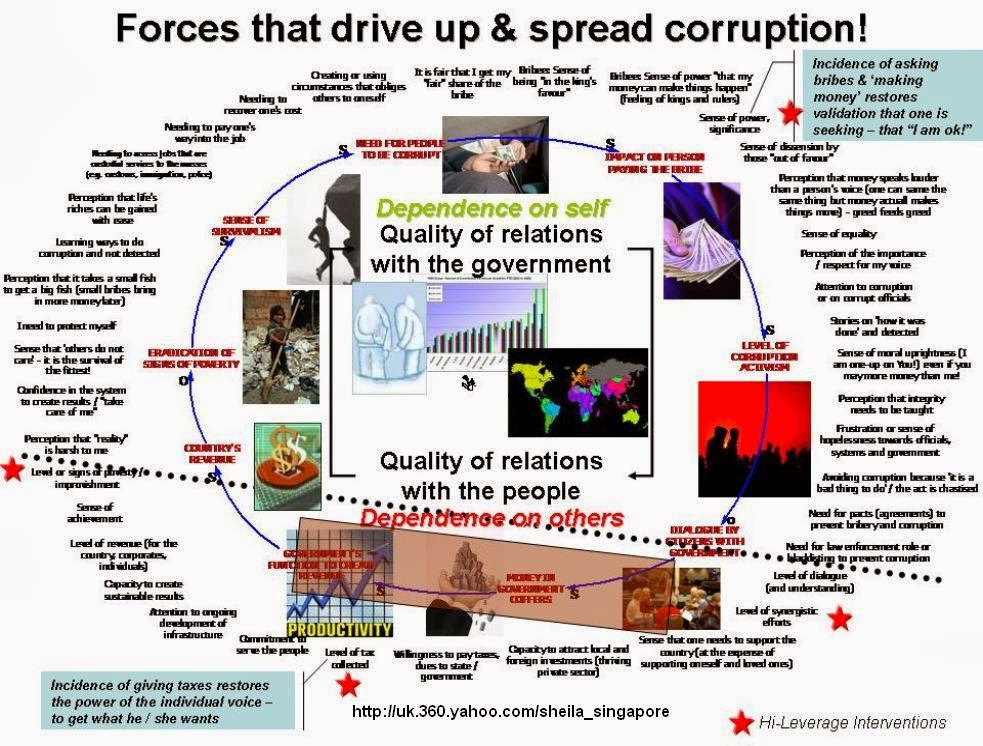 The same thing is happening in many other countries around the globe, as the Index shows. When two-third of the countries in the world have a score below 50%, the world is in bad shape. Corruption is endemic not only in Russia but also in much of the world.

Even the United States has no reason to boast when it comes to corruption: it shares 19th place on the Index with Uruguay. A score of 73 is nothing to be proud of. Canada fares a little better, but not much: it ties with Australia with a score of 81 for 9th place. Transparency International may group Canada among the least corrupt countries, but it is still far from perfect.

The fact that no nation has a perfect score indicates that corruption can be found all over the globe. Sadly, no nation is immune from this disease. The only thing that differs is the degree and extent of corruption. 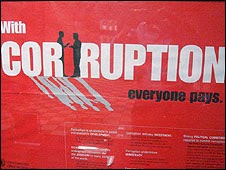 Corruption indeed has to stop, but it will not, not as long as there are greedy people in the world. The problem is made worse when you realize that corruption has achieved structural proportions in many countries. In other words, the structures of a particular society make it almost impossible to eradicate. I give examples of this in my earlier post on corruption.

Although much of the world may not want to hear the word, corruption is a sin that is deeply rooted in many individuals and societies. All of us share that sin to varying degrees. Few of us may be corrupt, but when we condone corruption in any way, we contribute to its persistence. We are all guilty. All of us are also affected by corruption, whether we like it or not. Thus it is important that we keep ourselves aware of the extent of corruption in the world. Corruption persists everywhere, but efforts must be made to stop it.

From my own religious perspective, corruption will persist until Jesus Christ returns and ushers in a new earth where sin is no more, and neither is death. Then corruption too will end. But that event still lies in the future. We must all wait until that day.

The Transparency International Corruption Perceptions Index 2013, in its own words, "serves as a reminder that the abuse of power, secret dealings and bribery continue to ravage societies around the world. The world urgently needs a renewed effort to crack down on money laundering, clean up political finance, pursue the return of stolen assets and build more transparent public institutions." 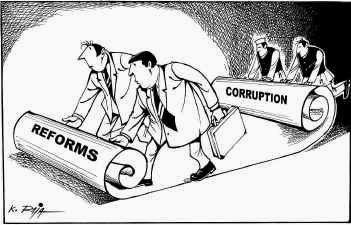