The Panama Papers: Anger and Action 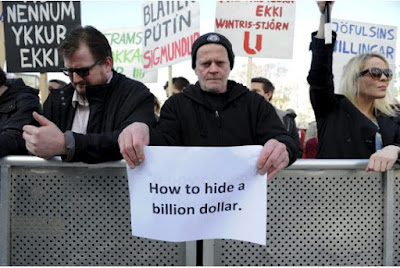 (This is part two of my reflections on the Panama Papers. These are the biggest massive leak in history, much larger even than those of Julian Assange and Edward Snowden. This leak highlights the awesome power of 21st-century whistleblowers to expose illegality. It also demonstrates the role of the global news media in bringing this story to the world’s attention. The genie is now out of the bottle; it cannot be returned).

I am angry! And so are millions of people around the world after the first revelations made in the Panama Papers were released. To put it crudely, I am pissed off. I rarely get this irate about a news item, but these revelations made my blood boil. This was not news; we already knew all that. Rather, it was the extensive detail that I found so revolting. That is what prompted my outrage and, no doubt, that of millions of others as well.

In my previous post, I explained some of the effects of those tax havens, so I won't repeat that now, except to state that those who use tax havens to hide their ill-gotten wealth are stealing from the poor. By buying politicians, these people have made tax evasion "legal." Their attitude seems to be that taxes are for other people, not for them.

I keep asking myself these questions: How can they justify amassing so much wealth and stashing it away while millions of people are starving or don't have a decent place to live? How can they be so lacking in compassion? How can they sleep well at night knowing the misery they cause through hoarding their wealth?

The fourth-century theologian, St. Basil the Great, encapsulates what I said there succinctly and poignantly. His comments demonstrate how old and pervasive such unconcern for others is. He could well have been addressing those billionaires today who stash their wealth overseas without any concern for the poor. 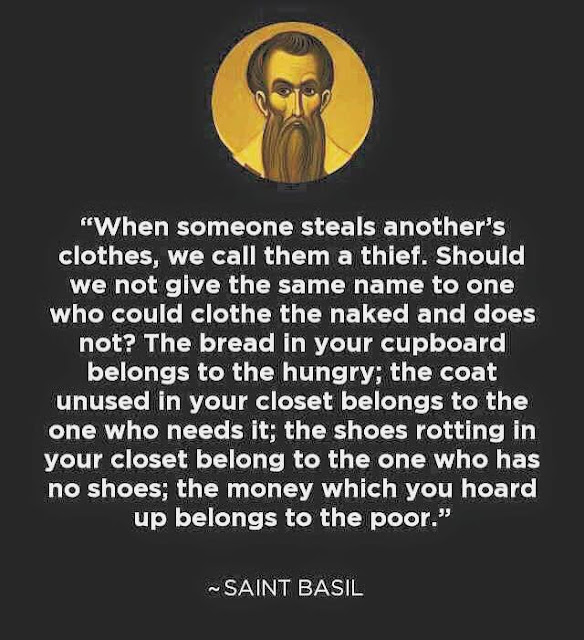 I am angry because they, quite frankly, don't give a damn about anyone other than themselves. My anger, as well as that of many other people, stems from a feeling of powerlessness. What can we do to stop the super-rich who own the legislatures and administrations of many countries and, therefore, seem to be untouchable?

But are they really untouchable? If the current anger tsunami-like has circled the world is any indication, many people are prepared to take action. The Prime Minister of Iceland was ignominiously forced out of office after almost 10% of Iceland's population converged on Parliament and demanded his resignation and new elections.

The same thing may be happening in the UK where thousands of people descended upon Downing Street in order to demand the resignation of Prime Minister David Cameron after he admitted his part in the Panama Papers scandal. His late father, Ian Cameron, was revealed to have owned an offshore account that was set up in Panama in order to avoid paying UK corporation and capital gains tax.

More heads will eventually roll, although not in Rusia, where President Vladimir Putin dismissed the Panama Papers investigation as "an attempt to destabilize the situation" in Russia. Putin's comments came four days after the papers implicated members of his inner circle in an alleged $2 billion money-laundering scheme. If I were a lawyer working for Mossack Fonseca, the Panama-based law firm that was also used by the Russians, I would watch my back.

Jeremy Corbin, the leader of the British Labour party has called on the Conservative government to take decisive action to crack down on tax avoidance and evasion, which he described as a moral issue that is taking money for schools and hospitals out of the pockets of working people. 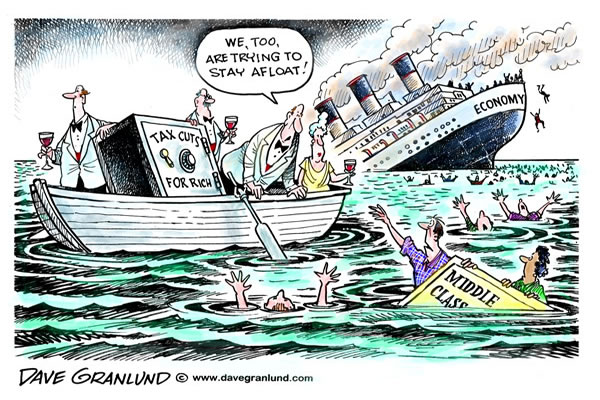 It is time for action. Some action is already being taken or has been called for. But still more is needed, even in the US. While few American have been identified thus far in the Panama Papers, that does not mean that they are not involved. Americans continue to hide vast sums of money in tax havens, but they have become increasingly sophisticated. Offshore entities, as well as onshore entities set up in places such as Wyoming and Nevada, can be created in such a way that it becomes almost impossible to figure out who is behind them.

Nevertheless, investing offshore has become much riskier for Americans. The US has instituted whistleblower programs for a number of years already. In addition, the US has a major weapon to uncover American money in offshore accounts: the Foreign Account Tax Compliance Act. Under this Act, foreign financial institutions are required to report US clients they suspect of trying to conceal assets.

Other countries, including Canada, have been urged to make it more difficult for their citizens to use overseas accounts. Canada is already doing that by collecting information on international fund transfers of more than $10,000, but much more is needed for Canada and all the other nations plagued by the loss of tax revenue to be able to do so.

Experts have suggested more international cooperation to share information, to close loopholes that cost governments billions of dollars, and to align tax rates so that there is not a race to the bottom between countries. But even that is not enough.

More is needed than reforming tax havens. They should be outlawed. That is the only way to tackle the cancer of corruption that lies at the heart of the global financial system, Tax havens have become parasites on the world economy that are sucking the lifeblood out of poor nations and making it increasingly difficult even for the middle class to survive in most countries. 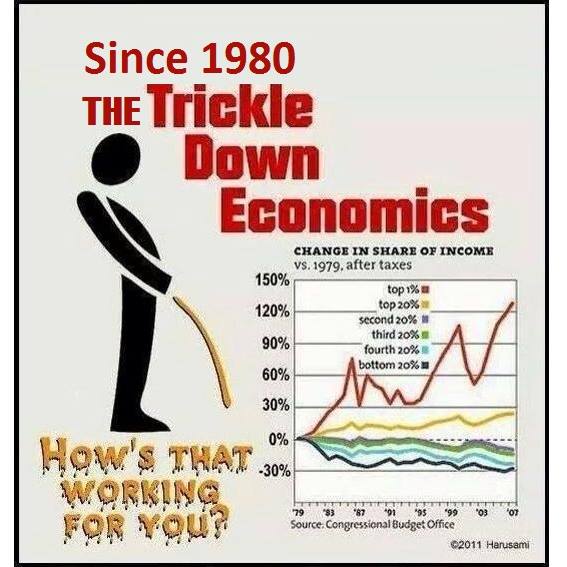 Enough is enough! End this criminality! Stop robber barons from putting their ill-gotten gains into tax havens! Transform economies so that everyone benefits, not only the rich! Change the tax system! Close the inequality gap! Resurrect the Occupy Wall Street movement! Reform the political systems controlled by the super-rich and benefitting only themselves!

The Occupy movement began in New York City, then spread throughout the US, Canada, and Europe. Initially, it protested the corrupting influence of money in politics but soon it was broadened to combat income inequality and attack the privileges of the "1%". The entire political and economic system needs to be transformed because it is rotten to the core.

As Micah White, a co-creator of Occupy Wall Street reminds us, this was a revolutionary movement intended to transform society. People in every country are facing the same globalized enemy. White writes: "The truth is the ultra-rich wield their wealth to maintain a stranglehold on power while simultaneously hiding from the taxman."


The fundamental problem that the Panama Papers brings to light is a question of global governance: the wrong people are in power. The only way the 99% is going to solve that deeper problem is if a social movement arises that is willing to use protest to swing elections in multiple countries in order to take power and govern the world. The release of the Panama Papers will be a success if it brings us even just one step closer to realizing that higher goal.

The goal of protests should be to take power and govern the world. White, therefore, advocates using swing elections in order to achieve that goal. While I agree that the wrong people are currently in power, I am not convinced that new people will immediately provide better governance as long as the wealthy are allowed to fund election campaigns. Nevertheless, White's idea of using elections strategically is an effective way to effect change. Protest for the sake of protest is largely noise as the Occupy movement showed some years ago. 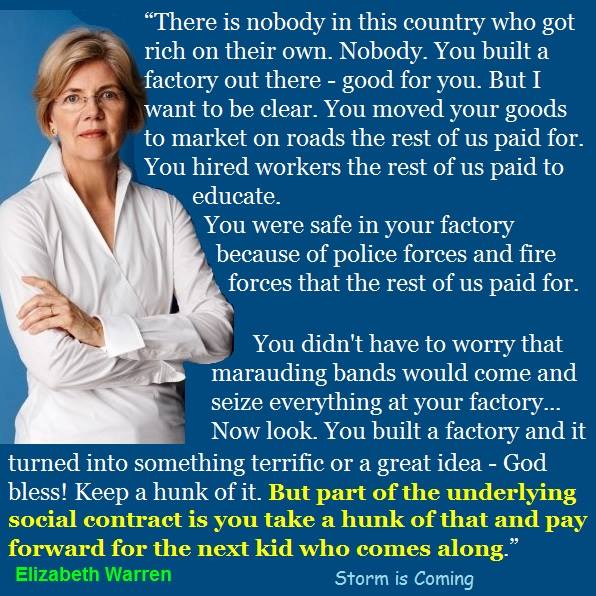 One measure that can be quickly implemented immediately is to shame the super-rich into paying their proper share of taxes, as Elizabeth Warren and others are already doing. We can begin by no longer referring tob it as tax avoidance, which sounds genteel, but calling it tax evasion, which is theft. This should be supplemented with the necessary legislation on a global scale to curb tax evasion.

The Panama Papers have shone a spotlight on overseas tax havens. This spotlight must not be allowed to be turned off. Instead, it must continue to expose the dark deeds of those who want to hoard their wealth and hide it from the taxman. They deserve the condemnation of the world for their rapacious acts.

We cannot eliminate the rich as a class nor stop their influence in politics entirely, although through a worldwide effort we can reign in the influence that money buys. That requires courage on the part of politicians everywhere since many of them have come to rely on such donations to win elections.

Nor can we stop the super-rich from parking their money in secret jurisdictions entirely. Money that formerly used to go into Swiss accounts has turned to other countries already. This game will never stop until it becomes so risky that no other alternative is available anymore.

Enough is enough! Anger must be channeled into action. Now is the time to take action while the spotlights are focused on these tax havens. This is a global problem and it must be dealt with globally, but the US continues to play a leading role in global economics. The current election campaign in the US is an especially auspicious moment to deal with this issue. Politicians should make it an issue, but few do. 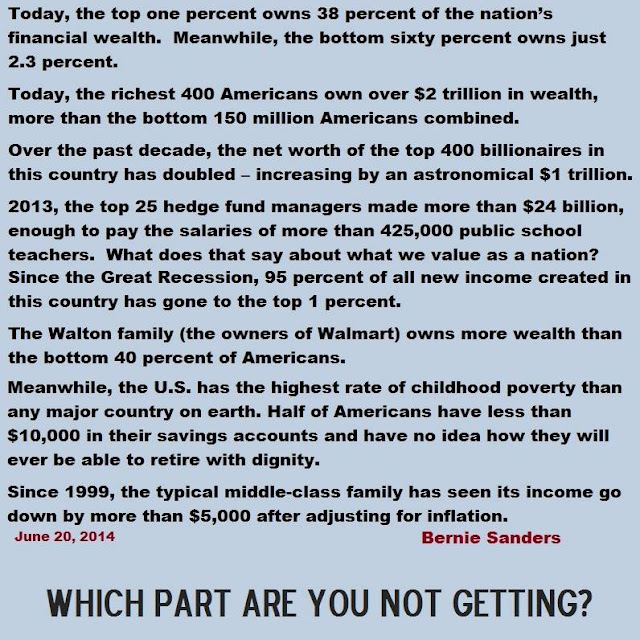 Bernie Sanders is the only politician who seems to have the guts to do so. Let's pray that more and more courageous men and woman join him, not only in the US but also in countries around the globe. If you are as angry as I am, visit your local politicians and urge their support.

Oxfam is currently campaigning for an end to tax havens as a way to end poverty. They are crying out for the sake of the poor, as their email makes very clear. If this does not inspire you to action, nothing will:


Now just 62 billionaires own the same wealth as half the world’s population – that's 3.6 billion people. This extreme inequality is being fuelled by a global network of tax havens.
Poor countries are losing at least $170 billion a year to tax havens – money that is desperately needed for vital services like healthcare and education.

When Jesus began his ministry he announced his future task in a synagogue in his hometown of Nazareth:

The Spirit of the Lord is on me, because he has anointed me to preach good news to the poor. He has sent me to proclaim freedom for the prisoners and recovery of sight for the blind, to release the oppressed, to proclaim the year of the Lord's favor (.(Luke 4:18-19).

My anger and yours too should be transformed into actions. There is good news for the poor: Tax havens must be eliminated!