Farewell to a prophet: Gerald Vandezande 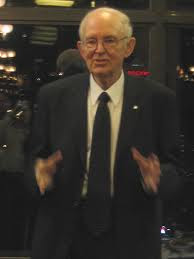 On Saturday, July 16, 2011, Canada lost a prophet. Gerald Vandezande died peacefully at home in Toronto. He was 77. Jerry, as he preferred to be called, was for many decades one of Canada's foremost Christian activists. But he was above all a prophet.
While I have refrained thus far in this blog from eulogizing individuals, I will make an exception for Jerry, since he was an exceptional person. As Dow Marmur, Senior Rabbi Emeritus of Holy Blossom Temple in Toronto, expressed it so aptly, Jerry "speaks like a prophet and thinks like a politician." That is a rare combination.
A true prophet is not someone who predicts the future, but is a spokesperson for God: someone whom God has commissioned to speak on his behalf to the society in which he or she lives. That was Jerry.
He was born in the Netherlands and emigrated to Canada in 1951 at the age of 17. Although he had only a high school education, by dint of hard work he learned cost accounting at night school. His employer sent him to Sarnia, where he met his future wife and coworker, Wynne.
He originally had a dream to become a minister in the Christian Reformed Church, but God had other plans for him: proclaiming the gospel through Christian action.
He did this first in the Christian Labour Association of Canada, where he became executive secretary. He was instrumental in winning certification for the CLAC in several provinces. After that he worked for social justice through the Committee for Justice and Liberty, which became the CJL Foundation and later formed the nucleus for Citizens for Public Justice.
This brief sketch cannot begin to do justice to Jerry's many ventures. Later in life his efforts for social justice expanded to include the environment, abortion, pluralism, independent schools, and child poverty. No doubt, I have forgotten many other things that he did.
Jerry had a way of speaking to everyone in Canadian society, from factory workers to politicians. And he was fearless in addressing the issues of the day. Above all, he had a knack for uniting people from many faiths and working with them for a common cause.
He was an inspiration and mentor to many younger people in Canada, who learned from him how a Christian should be engaged in politics. Jerry's thought had been shaped by the Dutch Christian religious leader and politician, Abraham Kuyper, who asserted that all of creation belongs to Christ. That means politics as well.
On abortion, for example, Jerry supported proposed federal legislation that many anti-abortion Christians opposed and was thus defeated. This loss was a great disappointment to him.
For Jerry, justice meant more than "Just Us," which was the title of his book. In the name of justice, we must not support only our own individual or community projects, but we must be prepared to build bridges to those of other political views or religious faiths. We must also be prepared to compromise, if necessary, in order to achieve our common political objectives. That, after all, is the nature of politics.
The nation of Canada indicated its respect for Jerry by awarding him the Order of Canada in May 2001. He also received numerous other awards.
His death is a great loss to all Canadians who are passionate for social justice. Many people from diverse walks of life and widely differing faiths have lost a great friend. I count myself among them. My wife and I have enjoyed his friendship and encouragement for many decades.
Jerry was a prophet for our time, and Canada has lost one of its greatest prophetic voices.
Our condolences go out to Wynne and their daughters, Janice and Karen, as well as the grandchildren, a great-grandchild, and his brothers, Harry, Henk, George, and Ben.
Farewell to a faithful prophet. A good and faithful servant of God, Jerry has received the commendation of the master (Mt. 25:21).