Famine in the Horn of Africa and our abundance 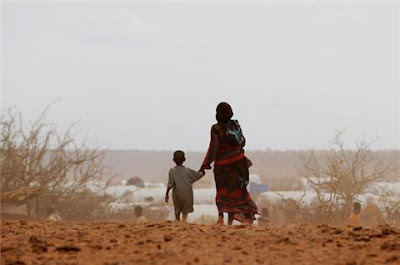 The United Nations has now officially declared a famine in parts of the Horn of Africa, where the worst drought in half a century has contributed already to thousands of death. It is estimated  that 500,000 children are at risk of death. In Somalia, about 10% of the children may die.
Famine is officially defined as when two adults or four children per group of 10,000 people are dying of hunger every day and 30 percent of the population is acutely malnourished. In addition, 20% of households must face extreme food shortages with only a limited ability to cope.
In Somalia, one in three children is already suffering from severe food shortage. These figures thus support the UN declaration.
At least $1.1 billion is needed through January, while $300 million is required in the next two months, as a result of this drought. So far less than 20% of the necessary funds have been pledged by various western nations. Obviously much more is needed.
In this post I do not want to provide a lot of details that are already widely available in newspapers or on TV. Instead, I want to compare the monetary cost of this famine (if that can be separated from the cost in deaths and human suffering) with what people in the western world spend on food for themselves and their pets.
In 2010, Americans spent $1240.4 billion on food, in spite of reduced spending because of rising food costs. Yet many Americans are obese. The medical costs of obesity were a staggering $147 billion. One tenth of one percent of the money Americans spent on food would therefore cover the total that is needed for this famine until new crops become available. The medical cost of obesity by itself is more than a hundred fold of what this famine will cost.
In 2005, people in the US spent $34 billion on pet food. No doubt more is spent on that today. No one wants pets to die of hunger, but only a few per cent of the amount spent on pet food every year would again suffice.
Similar comparisons could be made with statistics that are compiled in other countries on food-related expenditures.
Even though people in many countries, including Canada, are suffering as a result of the recession, these examples should suffice to prove that we have no excuse whatever, whether individually or as nations, not to provide the necessary funds to alleviate the suffering of people living (and dying) in the Horn Of Africa.
So far this year Canada has spent only about $10 million to provide help in that region. That is a drop in the bucket. I hope and pray that International Co-operation Minister Bev Oda, who is currently visiting the area, will recommend that the Canadian government provide much more.
There are many aid organizations that helping and they need our support. While some Islamist groups have thus far not permitted aid organizations to go into some areas, the UN is negotiating to make this possible.  This danger should not be used as an excuse.
We must open our hearts and our wallets so that the necessary funds can be provided.
And governments everywhere should be encouraged to help those who are suffering as a result of drought. These people are not to blame.
Jesus had compassion on the large crowds that followed him, especially since they had not eaten for three days (Mt. 15:32). Should we not display the same compassion, especially for people who are dying from a food shortage? Must we not share from our abundance with them?
Our problem is not that we have no money. Our problem is spiritual. In the 21st century there is no reason that anyone anywhere in the world needs to suffer because of a lack of food. There is money enough. We just spend it on the wrong things.
The cost of the F-35 program in the US is expected to top $1 trillion when all the bills are in. Surely the suffering people in the Horn of Africa and elsewhere in the world are worth more than a few F-35 fighters? If not, our spiritual problem is worse than we realize.