Burning the Qur'an -- the American response 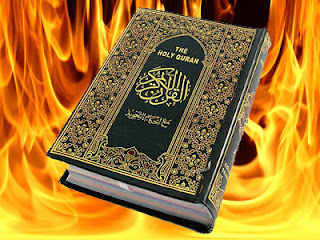 Many American just don't get it; they keep on insisting that the burning of the Qur'an in Afghanistan was an "accident" or a "mistake." This would not be catastrophic if those who said this were only ordinary people who had heard about this event and its bloody aftermath. Even the anger of Americans against those who killed US troops might be justified in their own eyes, since many know little about Islam and few have regular contact with Muslims. Moreover, their secularized worldview blinds them to any appreciation of why Muslims protested the burning, as well as confirming them in their dismissal of religion as the source of violence and the rest of the world's problems.

The ignorance of many American about Islam is often abysmal, as is, more ominously, that of their leaders. That is what concerns me especially in view of what happened last week. This is why I am returning to the topic of burning the Qur'an again, this time examining American reactions and trying to understand why so many responded the way they did. Let me be clear: I am not anti-American, but I do want to speak the truth in love to a people who still play an influential role in the world today.

More than 30 people have been killed thus far in clashes since it emerged last week that copies of the Muslim holy book and other religious materials had been thrown into a fire pit used to burn garbage at Bagram Air Field, a large US base north of Kabul. On Sunday protesters angry over the Qur'an burnings by American troops lobbed grenades at a US base in northern Afghanistan and clashed with police and troops in a day of violence that left seven international troops wounded and two Afghans dead. Many of the dead were Afghans. These protests have now spread to many other countries. 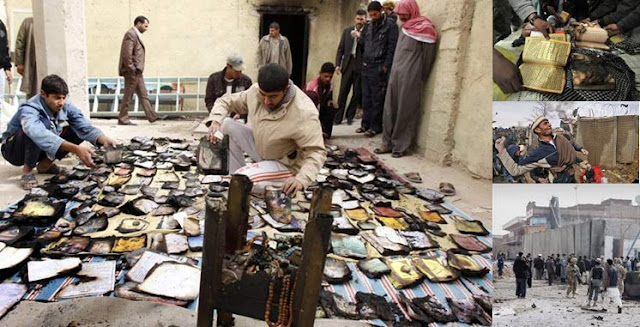 Some of the charred Qur'ans on display

The Pentagon keeps repeating this mantra about  a "mistake," and thus it is not surprising that Americans echo what they have been told. The angry response of the military is also understandable,since they have lost soldiers who were probably innocent of any involvement in the burnings, and later happened to be in the wrong place at the wrong time. Yet those officers who gave the orders must be held responsible for what they did. If no one gave those orders directly, then those who briefed the soldiers who did the actual burning about Islam were derelict in their duties, and should be disciplined as well.

President Obama quite properly apologized for the incident, but then made the apology virtually meaningless by once more calling it a "mistake." A more sincere apology in which the president took full responsibility for what happened and promised to discipline those who carried out the deed or gave the order to do so might have helped to defuse the situation. What the president said was too little too late. That was his "mistake."

It is very disturbing indeed when someone who has aspirations of becoming president of the United States repeats this line about the Qur'an burning being a "mistake." Republican presidential hopeful Rick Santorum not only criticized President Barack Obama's apology for the burning of Qurans in Afghanistan but added that Afghanistan should apologize to the US for the deaths of four US soldiers during six days of violence sparked by the incident. 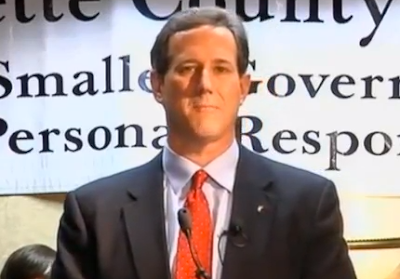 The GOP presidential front-runner told a crowd that the burning of the Quran in Afghanistan by US troops was a “mistake” and people should not be upset over it. He also said that apologizing only encourages and “incites” those “evil” doers. He explained: “Our country respects all religions. Treats all religions with dignity and religious freedom. Unlike the people who are out killing our people in protests…” He characterizes the people of Afghanistan as “evil” and claims they have “no respect for life.”

"The response needs to be apologized for by (President Hamid) Karzai and the Afghan people for attacking and killing our men and women in uniform and overreacting to this inadvertent mistake," Santorum explained further on NBC's "Meet the Press". "That is the real crime here, not what our soldiers did. The president's apology suggests that there is blame and that the US did something wrong in the sense of doing a deliberate act."

Santorum adds that rather than saying he was sorry, Obama should have only acknowledged that burning copies of Islam's holiest book in a trash pit was wrong and taken responsibility for the incident, "but to apologize, I think, lends credibility that somehow or another that it was more than that." 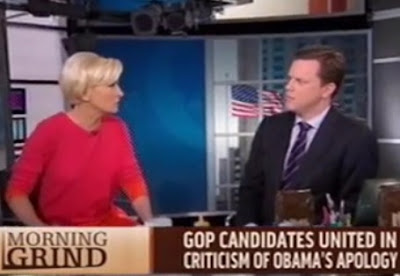 Santorum is merely the latest Republican presidential candidate to criticize the president for apologizing for burning the religious materials. Despite repeated apologies from many US officials for what they said was a "mistake," their regrets have not quelled the anger of Afghans, who viewed the Qur'an burnings not only as a sacrilege but also as an act of disrespect for their culture and religion.

For Muslims the Qur'an is the Word of God and must never be desecrated in any way. That is sacrilegious.
For Christians the best parallel is Jesus Christ, whose name should not be misused, although that happens regularly, even by many Christians. Yet Christians do not typically respond negatively when this happens, except perhaps to (very) mildly criticize those who take Christ's name in vain. And they would probably not get upset at all if someone would burn a Bible; their response might be, "So what!"

Most American Christians therefore cannot understand the reactions of Afghans after this incident. Hence their anger at the violence and especially the many killings, which they perceive of as murder, especially when US troops are involved. They do not understand the sacrilege, regarding it simply as "a mistake," as has been repeated in numerous apologies. Whether Muslims are correct in their belief is not the point, this is what they believe. Hence the accusation of sacrilege and the demands for punishment.

Non-Muslims should respect their belief and act accordingly, by treating the Qur'an properly. Muslims have many rules regarding the Qur'an: e.g. no other book should be placed above it, and it must be properly disposed when no longer useful, preferably by burial. That may seem extreme to non-Muslims, but those are the rules. 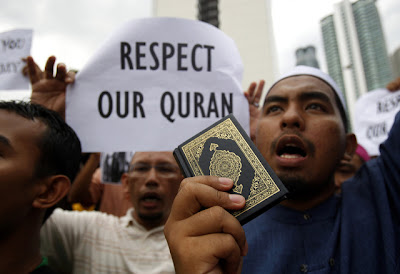 Muslims do not separate their faith from the rest of life, thus such rules are very important for them. Religion is not a private matter but belongs in the public sphere. You may disagree, but that does not change their basic belief or their rules. Their plea for the role of religion in public life is not popular, as the controversy around Baroness Warsi, who is a Muslim, proves (see: http://hellemanworld.blogspot.com/2012/02/religion-and-public-sphere.html?spref=fb), but it not only deserves a fair hearing it is also the correct position in my opinion.

This plea should not be confused with the cries of some Muslim extremists who advocate theocracy or of those Muslims who want to see sharia implemented everywhere. These are "red herrings," issues have nothing to so with the plea for a proper role for religion in the public sphere.

Many Christians, in my opinion, have been so influenced by secularism that they no longer acknowledge the role that religion should play in public life. This is the position that prevailed in Europe for centuries until the Enlightenment. Instead, they have adopted a dualistic view of life in which the worship of God is reserved for Sundays or other private moments, while the rest of the week belongs to the public sphere where other, more worldly, rules apply. If I had more time, I would elaborate my argument further.

As long as Americans (and other Westerners) hold to this secular worldview, they will be incapable of understanding the beliefs and actions of Muslims, and they will continue to excuse the burning of the Qur'an as merely a "mistake." And they will continue to label religion as the source of the world's problems, and thus the solution is to eradicate religion or at least restrict religion to the private sphere, where it belongs in their opinion. Their refusal to understand Islam is consistent with their view on religion.

I do not condone the violence in Afghanistan. In fact, I am a proponent of active non-violence, the same belief that motivated Gandhi and Martin Luther King, Jr. There is no excuse for the killings that followed the burning of the Qur'an. Those who committed these crimes must be punished, but so should those who are responsible in any way for the burning of these books. What they did is equally reprehensible, since they provided the spark that started the fire. Unfortunately, no court of human justice will ever be able to assign the appropriate punishments to all those involved. That we must leave in other hands. 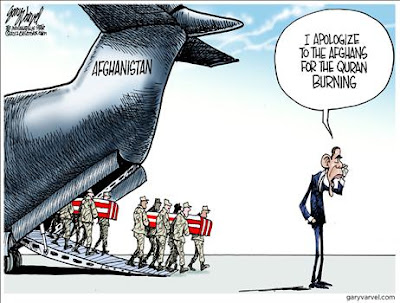 I hope that the Americans may have learned a valuable lesson as a result of the burning of the Qur'an and its bloody aftermath, but somehow I doubt it. Rick Santorum clearly has not and many Americans probably did not either. How sad! Not only may the end of the war in Afghanistan have been delayed by this incident, but the Muslim world now has new evidence, if more were needed, that the West is waging a war against Islam. That may be the greatest tragedy of all.
"When will they ever learn?" Pete Seegers asked more than fifty year ago in his anti-war protest song, "Where have all the flowers gone?" These words are as relevant today as when they were first composed. Americans should now be asking themselves, when will we ever learn?