Burning the Qur'an -- how stupid! 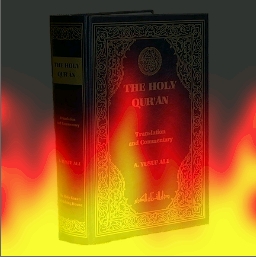 When I first heard about the burning of the Qur'an at the Bagram Airbase in Afghanistan, my first reaction was: How stupid! What I learned later confirms me in my harsh judgment. The daily protests and the multiple deaths thus far testify to the reaction of Afghans to the desecration of the Muslim holy book -- an action that is best described as stupid; any other judgment might be even worse.

President Barack Obama has apologized to Afghans for the ignorance of the two US soldiers who burned several copies of the Qur'an at this US airbase near the Afghan capital. It was the second abject American apology since the religious books were put in an incinerator at the airbase dump. The incident has rightfully infuriated Afghans, who are widely regarded across the Islamic world as among the most pious of Muslims. 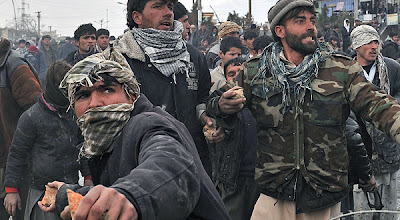 According to Afghan workers who witnessed the events, around 10 or 11 p.m. on Monday a dump truck escorted by a military vehicle drove up to the landfill at Bagram Air Base, where 20 or so Afghans work. Two uniformed NATO personnel, a man and a woman, began unloading bags of books from the back of the truck and throwing them into a pit for incineration. The Afghan workers described the pair as Americans.


Accounts from some of the workers at the landfill suggested that the two people were oblivious to the significance of what they were doing. They made no attempt to hide the books, instead appearing to be routinely carrying out their duties.“When we saw these soldiers burning books, we moved closer to see what was going on, and one of the boys said, ‘It is Holy Qur'an,’ ” said one of the laborers. Another of the laborers, said he and two friends had shouted at the two people: “Don’t burn our holy book! We will give it to our mullahs!” The two NATO personnel drew back, but two bags of books they had already thrown into the pit had begun to burn.

Protests began hours later, as Afghan workers who had seen the burning emerged from the base, one or two of them carrying damaged Qur'ans hidden in their clothes. Protests swelled through the morning and became violent as hundreds of infuriated Afghans set tires on fire and burned an external checkpoint at one of the entrances to the air base. Shouting “Death to America” and “We don’t want them anymore,” they closed the district government building and stopped people trying to go to the center of the town, witnesses said. Some in the crowd sang Taliban songs. 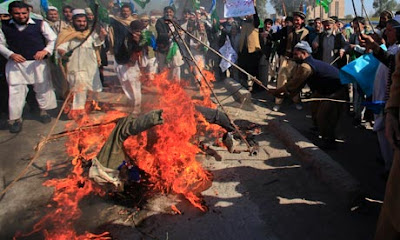 An article in the Montreal Gazette asks the most pertinent question: "How can it possibly be, 124 months after invading Afghanistan and after at least 250,000 U.S. troops have rotated through Afghanistan and half a million more have rotated through Iraq, with many on their third and fourth tours, that there are still soldiers who have no clue as to the significance of the Qur'an to Muslims?"

The article observes further that there is no point saying that Afghans overreact to such incidents. The reality is that they do react this way. And there is no question that treating religious materials in such a manner is highly offensive and disrespectful, with inevitable consequences in a country as volatile as Afghanistan. Nor does it help that this follows a recent incident in which US Marines shot a video of themselves urinating on the corpses of several Taliban fighters.

The article continues by pointing out that, while fingers were pointed mostly at the two hapless soldiers at Bagram who dumped the Qurans in the fire, they are hardly the only ones to blame. The Americans who run Bagram's notorious detention center are certainly more culpable. They had collected the Qurans and sent them off to be burned because they were no longer needed as the number of Afghans and Pakistanis being held at the base has been declining. They should have consulted their army of Afghan interpreters on proper ways to dispose of Qurans, including burial in a Muslim cemetery.Clearly the easiest thing to have done if the Qurans were no longer required at the detention centre, would have been to give them to local mullahs who would have been duty bound to accept them and protect them. But the greatest fault lies with the men and women who devise and run the training programs that troops attend before deploying to Afghanistan. 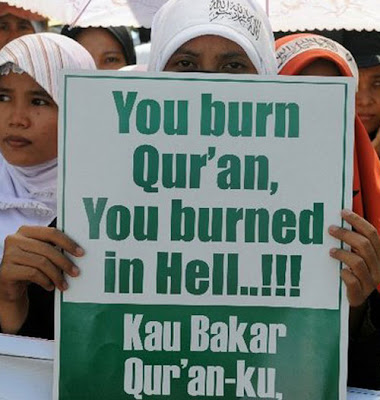 One wonders why the US troops involved were not properly briefed before beginning their Afghan tours, briefings that should have included information about cultural and religious sensitivities as well as taboos and how to avoid running afoul of them. Either there were no such briefings before they left the US, which I find difficult to comprehend, or they should have been properly briefed upon their arrival in the country.

The actions of the troops involved, especially the officers, since they gave the orders, are not only insensitive, they are stupid. The mounting death toll, including that of two US soldiers, proves the point. The task of the remaining NATO troops in Afghanistan has been made immeasurably more difficult. How could anyone with even a smidgen of brains do anything so stupid?

After ten years of the war in Afghanistan, it is not surprising that Afghans, or everyone else for that matter, find it hard to understand why any member of the foreign forces in that country would not know how offensive desecrating the Qur'an could be, or recognize the potential for violence it could unleash in a country where news of the burning of a single copy of the Muslim holy book, by a preacher in Florida, provoked mobs to ransack a UN office and kill twelve people in April. Are these foreign troops so out of touch with reality?

The potential scope of the fallout from the burning of copies of the Quar'an by American military personnel became chillingly clear later in the week as a man in an Afghan Army uniform shot and killed two American soldiers. And seven Afghans were killed in three provinces and many more were injured, most in skirmishes with Afghan security forces. More deaths followed on Saturday when two American officers were shot dead inside the Interior Ministry building. NATO responded by immediately pulling all military advisers out of Afghan ministries in Kabul. Many more deaths are expected before these protests run their course. 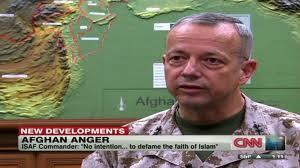 The ISAF commander apologizing for the Qur'an burning

President Barack Obama had earlier sent a letter to President Karzai apologising for the "unintentional" burning of the Qur'ans. But this apology was not enough to satisfy many Muslims who consider the Qur'an to be the literal word of God and treat each copy with deep reverence. Desecration is considered one of the worst forms of blasphemy and needs to be punished.

Afghanistan wants NATO to put those responsible on public trial. One Afghan commander said in a TV interview that those who burned Qur'ans should be hung. In neighboring Pakistan, about 400 members of a hardline Islamist group staged protests and shouted, "If you burn the Qur'an, we will burn you." 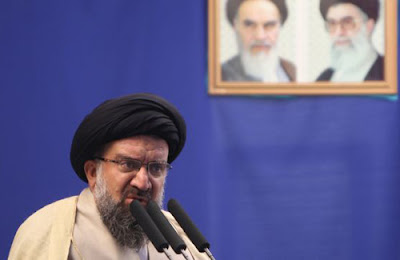 Many did not accept Obama's apology. Iranian cleric Ahmad Khatami said the US had purposely burned the Qur'ans. "These apologies are fake. The world should know that America is against Islam," he said in a speech broadcast live on state radio. "It (the Qur'an burning) was not a mistake. It was an intentional move, done on purpose."

I doubt that the burning of the Qur'an was done on purpose in order to provoke riots . That would be more than stupid, it would be suicidal for the NATO coalition that wants to withdraw from Afghanistan as soon as possible. As I am writing this, the end of the protests and the ensuing bloodshed is not yet in sight. No doubt the soldiers who were involved have become aware by now of the consequences of their stupid action. Those who issued the order, however, are most responsible. They certainly need to be disciplined.

Even if these troops are never put on trial, they will have to live with the memory that many people, both Afghans and Americans, have died as a result. We all do stupid things, but the consequences are not always as enormous or as deadly. May God forgive them!