How to effect political change non-violently: organize a sex strike

Women in Togo have been urged to abstain from sex for a week from Monday to push their demand for reform. Opposition leader Isabelle Ameganvi said that sex could be a "weapon of the battle" to achieve political change. But she added immediately,"We have many means to oblige men to understand what women want in Togo."

Ameganvi said she had been inspired by a similar strike by Liberian women in 2003, who used a sex strike to campaign for peace. Women's groups hope that the strike will motivate men who are not involved in the political movement to pursue its goals, which include an end to a system allowing unlimited presidential terms.

The women want President Faure Gnassingbe, whose family has held power for decades, to stand down. "If men refuse to hear our cries we will hold another demonstration that will be more powerful than a sex strike," Ameganyi added.

Such a strike has been used with varied degrees of success many times in the modern period, not only in Liberia but also in Nigeria, Kenya, Columbia, the Philippines, and the Ukraine. And a strike has even been suggested in Belgium. Sex strikes have at the very least publicized the grievances of many people, especially women, in these countries.

In Liberia in 2003, nonviolent protests that included a sex strike resulted in women achieving peace after a 14-year civil war and helped bring to power that country's first female head of state, Ellen Johnson Sirleaf. 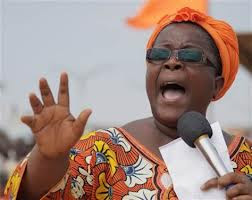 
The most famous example of a sex strike is in a Greek comedy written by Aristophanes. First performed in Athens in 411 BC, it is a comic account of one woman's extraordinary mission to end the Peloponnesian War. Lysistrata persuades the women of Greece to withhold their sexual privileges from their husbands and lovers as a means of forcing the men to negotiate peace. But this is a strategy that inflames the battle between the sexes.

Lysistrata, whose name in Attic Greek, Λυσιστράτη, means "Army-disbander," has convened a meeting of women from various city states in Greece, although there is no mention of how she managed this feat, and, very soon after confiding in her friend about her concerns for the female sex, the women begin arriving.

Lysistrata persuades the women to withhold sexual privileges from their menfolk as a means of forcing them to end the interminable Peloponnesian War. The women are reluctant, but the deal is sealed with a solemn oath around a wine bowl, in which the women temporarily abjure all sexual pleasures.

Some of the women waver, but Lysistrata rallies them with an oracle. She is an exceptional woman and by the end of the play she has demonstrated power over men also -- even the leaders of Greece are submissive once caught in her magic. 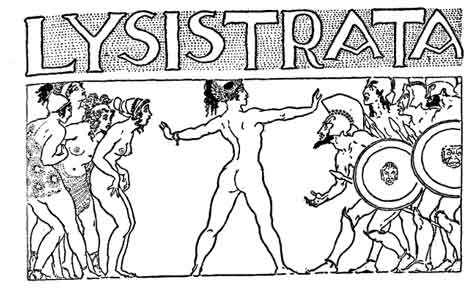 Modern adaptations of Lysistrata are often feminist and pacifist in their aim, but the original play was neither feminist nor unreservedly pacifist. Even when dramatic poets wanted to demonstrate empathy with the female condition, in classical Athens they still reinforced sexual stereotyping of women as irrational creatures in need of protection from themselves and from others.

In conclusion, the play is not an attempt to promote universal peace -- Lysistrata chides both the Athenian and Spartan envoys for allying themselves with barbarians. The play, as has been noted by others, is not so much a plea for an end to the Peloponnesian war as it is an imaginative vision of how to end this war in an honorable way at a time when no such ending was possible.

Nevertheless, Lysistrata has fired the imagination of women for centuries, especially in the modern period. Thus it is hardly surprising that today women, who are often as powerless as the women in this ancient play, use one of the few tools at their disposal in order to effect political change in their native land: a sex strike.

In African societies, where women are controlled by men even more that they are in the West, a sex strike is as difficult to achieve as it was in ancient Greece. Contemporary women are very often still treated as chattel, and they have few rights even when it comes to their own bodies. 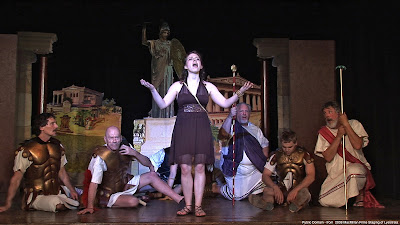 A modern staging of Lysistrata

The call for a week-long strike in Togo has even been ridiculed by the some women. Few people expect it to last more than two days. As Lysistrata discovered, many women are reluctant to continue such a strike for long. Yet this is still a powerful tool, even if it is largely symbolic.

What makes a sex strike especially powerful is its non-violent nature. No one is hurt in such a strike, unless it is the pride of the sexually-deprived men. Violence may ensue afterwards, as men beat their wives, but the strike itself does not involve violence.

In a world where violent revolutions are increasingly the norm, it is refreshing to be reminded of an age-old method of effecting political change that does not resort to violence. The women in Togo may yet prove that change is possible in a peaceful way. Women (and men) everywhere must support their effort and seek to emulate them.

People who seek peaceful ways of resolving conflicts must find other ways as well to achieve their goals. People of faith around the world must join in the search for non-violent alternative ways to effect political change. A sex strike is only one tool. There are many others that we can and must use.