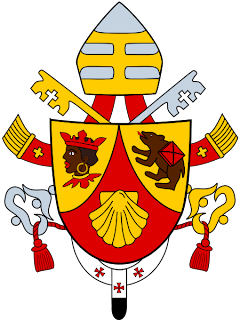 What does one do with a retired pope? The Roman Catholic Church has not had to deal with this question for almost 600 years. Pope Gregory XII retired in 1415 in order to end the Western Schism. He did not stay in Rome, but spent the remaining two years of his life in peaceful obscurity in the town of Ancona in central Italy.

Will Pope Benedict XVI in his retirement also enjoy a life of peaceful obscurity? A few hours before his resignation went into effect, Benedict flew by helicopter to the papal summer home at Castel Gandolfo, about 25 kilometers south of Rome, where he will stay for only a few months while renovations are completed to a monastery inside the Vatican walls where he he intends to live upon his return to Rome.

When Benedict arrived at Castel Gandolfo, he thanked the crowd and told them that for the rest of his life, "I will simply be a pilgrim, who is starting the last phase of his pilgrimage on this Earth." 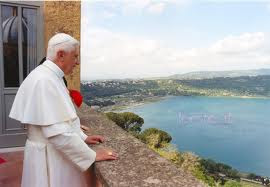 This pilgrim pope is expressing what is a reality for everyone else: all of us are pilgrims. Everyone of us is on a journey to a new and better life on a renewed Earth that is joined once again to heaven. I am sure this is what Benedict meant.

The scallop in Benedict's papal shield stands for pilgrimage. This apparently refers to a legend about St. Augustine, although I not sure about the details. The mussel is also found in the arms of Scots Monastery, Regensburg, where Benedict began his career as a priest.

I hope that this pilgrim pope will also act in a humble, self-effacing way that ought to characterize all pilgrims. Unfortunately, popes throughout history have not always been the humble men they should have been.

Even if a man is reticent by nature, as Benedict was, the papacy has a way of elevating him far above his brothers, since he is the successor to St. Peter, who Catholics claim was appointed by Christ to be the leader of the Church, and was thus the first pope. 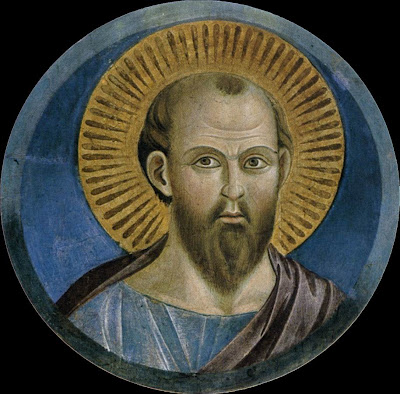 The pope is Bishop of Rome, who from the time of the early church was widely regarded as having authority over the other churches. Even after the fall of Rome, the pope served as the source of unity in the Church. Such authority can give even the most humble man an aura of power and majesty that will change him, if only because of the way he is trreated by his fellow bishops and ordinary believers.

Once someone has tasted the elixir of power and the adoration that sometimes accompanies it, it is not easy to remain humble, even after one retires. Retirement can be very difficult: one day one is still in charge, while the next day one has lost all authority. When one has lost power, one can easily be tempted to try to influence affairs and thus retain a modicum of one's former power.

Benedict will be living within the walls of the Vatican not far from the levers of power. The monastery is only a short distance from the papal apartments, which are the official residence of the pope. Benedict lived there for eight years, and now it will be occupied by his successors. 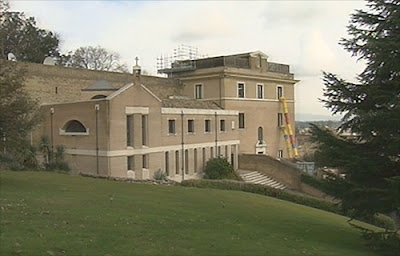 In addition to these apartments, he has lost his papal ring; his red shoes; the mozzetta, the short, elbow-length cape that covers the pope's shoulders, although he can still wear the white papal cassock; and even his papal twitter account, @pontifex, which is available for the next pope.

Benedict has said he plans to spend his retirement "hidden from the world" in a life of prayer. He is to be commended for that, but dangers lurk even then. His personal secretary, Archbishop Georg Gaenswein, is to continue to work for him in his retirement. But the Archbishop will also become the personal secretary to the new pontiff. Thus Benedict will have easy access to the new pope, without them having to meet in person.

Benedict has promised to render full obedience to the new pope, but what happens when a newly elected pontiff turns to his predecessor for advice? The newly emeritated pope has appointed a large majority of the cardinals who elect his successor. Many of them are his friends, while all of them are well-known to him.

He may not desire to influence his successor in any way, but such influence may happen regardless. That danger exists, especially when two popes live in close proximity. Six hundred years Pope Gregory XII moved almost 300 kilometers from Rome in order to reduce the change of influencing his successor. Benedict's problem is more acute. 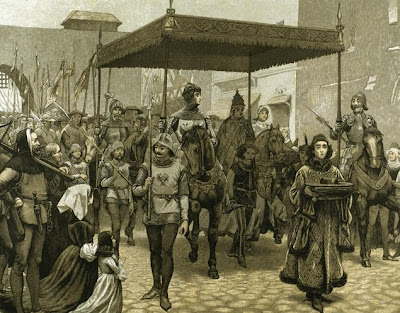 Because of his frail health, Benedict could not become a pilgrim pope the way John Paul II was, who traveled to 129 countries, more than any other pope before him or since. Pope Paul VI was called the first pilgrim pope, since he was the first pontiff to fly in an airplane.

The world needs more pilgrim popes in every sense of the phrase. Popes who are not only willing to travel all over the globe but realize that they are also on a much longer journey to a much better place. Above all, they must remain humble as they engage in their pilgrimage.

Pilgrim popes must be humble, since they know who is the Lord of the Church. Christ is the one whom they are serving. Such divine service should never be allowed to go to anyone's head, not even a pope who is responsible for more than one billion Catholics.

There is a story, which may be apocryphal, that Pope John-Paul II was asked one day, "How can you sleep at night with your enormous global responsibilities?" "Easy," said the pope, "I say to God., 'It is your Church, you take care of it!'"

That is the proper attitude for a pope. Humility is not valued greatly by the secular world, but in the world of faith it is one of the chief virtues. May there be many more pilgrim popes!