Death of a (saintly?) dictator 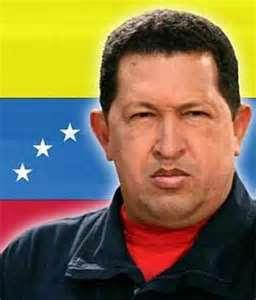 Death is the one certainty in life. The mortality rate of the human race is 100%. Dictators are no exception, as Hugo Chavez, the President of Venezuela, has discovered. His death was a long time coming, yet it was inevitable as the "baseball-sized tumor in his pelvic region" that continued to ravage his body, in spite of many medical interventions.

Chavez was a dictator; he enjoyed almost unlimited power. Even towards the end, he insisted he could run the country from his Havana sickbed. He went to Cuba several times for operations and chemotherapy, and even declared himself cured. Last October, he campaigned for and won reelection for another six-year term.

He was seemingly addicted to power and acclaim, but that is hardly unusual for people who once have gained a lot of power, as Lord Acton affirmed jn his famous aphorism (although he referred to the Catholic church): "power corrupts, but absolute power corrupts absolutely."

Chavez ruled by whim, in the style of a Latin American caudillo. Yet, unlike Fidel Castro, he used elections not force and thus gave Venezuela at least the semblance of democracy. This tradition of elections will make it easier for the country to face the future without his dominating presence. 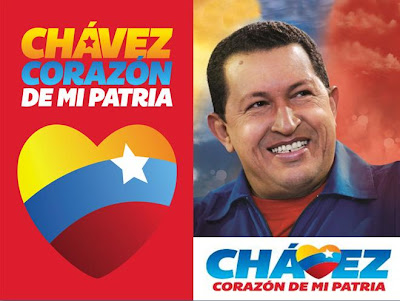 By promising to end corruption he won election for the first time in 1998 with a sizable majority. He then called for a Constituent Assembly that wrote a new constitution that enshrined basic human rights but also accorded new, almost absolute powers to the presidency and the military.

When the armed forces refused to support him in 2002 because of huge public protests, he stepped down briefly as president, although he did not officially resign. Yet he was soon reinstated by the military. Since then, he has won every election, including the latest. Unfortunately he was too sick to be installed again in January, so he disregarded his own constitution. This was the situation when he died.

Chavez was an autocrat who had packed the courts, gained full control of the legislature and the bureaucracy and emasculated the opposition. Yet even his severest critics have to admit that he did much to help the poor people of Venezuela. He came by his concern for the poor naturally. He was born into a poor working-class family. He became a military officer, but grew dissatisfied with the political system and wanted to overthrow it.

His greatest hero was Simon Bolivar, his fellow countryman and the great revolutionary and liberator of many Latin American countries, including Venezuela, Columbia, Ecuador, Peru and Bolivia, who was to become president of many of these countries for varying periods of time. Bolivar's name is part of the official name of native land (the Bolivarian Republic of Venezuela), which is part of Chavez' legacy. Bolivar's name is also associated with a quasi-religious cult that Chavez later appropriated. 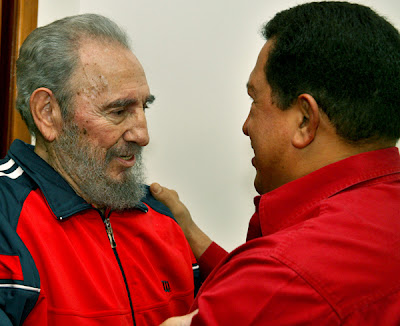 Fidel Castro was another highly important hero for Chavez. The countries they represented had a symbiotic relationship: Venezuela shipped highly subsidized oil to Cuba in return for the loan of sorely-needed medical personnel. Castro became Chavez' most important counselor and friend.

Chavez had a rogue's gallery of friends, including Muammar Gaddafi of Lybia and Mahmoud Amadinejab of Iran. His chief enemy was George W. Bush, whom he nicknamed the "Devil." Chavez had a very rocky relationship with the US for decades, among other things accusing the US of involvement in the coup that ousted him temporarily.

Venezuela sits on top of one of the largest oil deposits in the world. This makes that country vitally important to the global economy. What will happen to Venezuela now that Chavez is no longer alive? And what will happen to all the chavistas who supported him in the past and who still adore him to the point of worship?

Millions of Venezuelans lined up for hours to view the simple, glass-covered coffin holding the body of Chavez before the memorial service was held. The government decided that his embalmed body will be displayed in a museum "eternally," much like the body of Lenin is still on display in Red Square in Moscow.

I have seen Lenin's body. I was alone in the mausoleum, and I am still deeply troubled by the veneration of this revolutionary almost a century after his death. This resembles the veneration of the relics of saints in Catholic churches, but in Lenin's case it was done by an officially atheistic state. Yet many Russians to this day refuse to permit Lenin to be buried beside his mother in a St. Petersburg cemetery, as was his own wish, since that would represent the burial of their beliefs. Reports from the time suggest that Lenin's death did not provoke the outpouring of grief that Chavez' passing did. 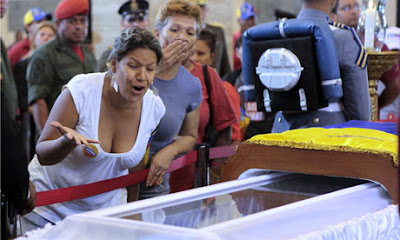 In the case of Chavez, who was estranged from the Catholic church for many years, such veneration would make him a secular saint. Is this a product of the Bolivarian cult that Chavez appropriated for his own use? Will such displays of grief form the beginnings of a new posthumous personality cult?

The Guardian newspaper wonders whether the photographer who took the photo of the two women, as well as those who have decided that Chavez should lie in state, were influenced by the rich visual heritage of the Catholic world as exemplified in numerous oil paintings such as that by Rafael not to mention countless postcards.

Or is Chavez to become more than just a venerated saint in the medieval style but now a Christ-like figure who is worshiped, as Venezuelans already seem to be doing? I hope not! That would be sacrilegious.

Amadinejab has already suggested that Chavez, like Christ, will be resurrected. Amadinejab, of course, is widely regarded as a fool, just as Chavez is. They make a good pair together.

Yet I very much doubt that Chavez, who after his illness became reconciled with the Catholic church, would appreciate the comparison with Christ. He did much to rescue many of his countrymen from poverty using the fabulous oil-wealth of his country, and he certainly did not want to die. Nevertheless, he did not regard himself as Christ, nor would he have wanted to be worshiped. Adulation is one thing, worship another. 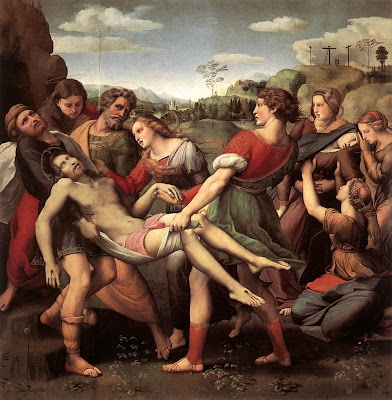 Hugo Chavez was not a saint, nor was he a Christ-like figure. Instead, he was a man with many faults (as we all do), but he truly had a heart for the poor. He was indeed a dictator who sometimes played the fool on the world stage, yet he resolutely defended his country against all forms of imperialism, whether real or perceived. He was a socialist, but that does not make him as evil as many Americans suppose. He was a man of many paradoxes, but that is hardly surprising for someone who cut a larger-than-life figure not only in his own country but also in the rest of the world.

Now Venezuela has an opportunity to change. Venezuelans should not celebrate Chavez' death, but they can celebrate change. The whole world is watching eagerly to see what happens.