Stop the violence in Egypt! 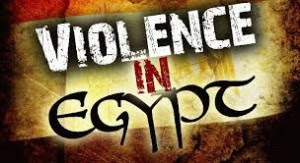 The violence in Egypt seems to grow by the day. In the past week more than 1200 people have been killed. Who is responsible for all this violence? And when will it ever end?

Both the Muslim Brotherhood (MB) and those who continue to support ousted President Mohamed Morsi, as well as the military and those who support General Abd El-Fattah El-Sisi, the de facto leader of the coup, have to share responsibility and blame for this unending violence.

All the media reports present one-sided views of what is happening in this huge country of 85 million people. No one has the overall picture, and thus it is difficult to determine who should get the bulk of the blame.

The reasons why Egyptians are killing each other as well as burning churches and government buildings are much more complex than most people realize. They are born of a fragmentation of the Egyptian population into too many groups that dismiss other Egyptians as enemies. There is now a total disregard for human life, as well as a seeming desire to destroy the whole country.

Clashes have taken place not only in Cairo and Alexandria but throughout the rest of the country as well, as the map shows. 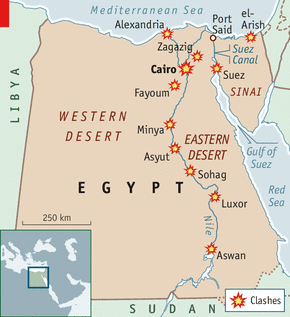 Through the use of violence, the MB has demonstrated its Islamist credentials during the past few weeks. If there were any lingering doubts, they have all been removed. The MS is truly an Islamist organization. Some people think they never would have relinquished power. Hence the anger of MB at Morsi's ouster.

Morsi’s performance as president was a disaster. He had won only about a quarter of the eligible vote. Yet soon he proceeded to flout all democratic norms. His government packed a constitutional committee with Islamists, rushing through electoral and other laws without due consent.

The Morsi government let sectarian hatred against Muslim minorities and the country's 8m or so Christians rise unchecked. They allowed the destruction of numerous churches and other Christian buildings.

In addition, the sheer incompetence its stewardship of the economy destroyed whatever standing Morsi may have had among ordinary Egyptians. More than 20m people, which is about half the adult population, is said to have signed a petition for a referendum on his presidency.

When Morsi was removed from office on July 31 and imprisoned, the MB demanded his reinstatement. They were unwilling to compromise in any way. That was foolish, but that demand may yet offer a way out of the conundrum and put an end to the violence as I shall argue later. 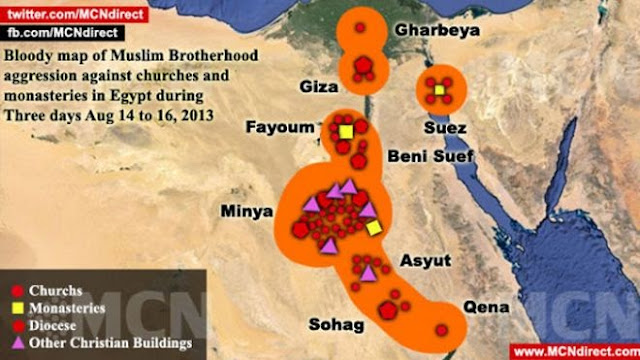 Compare the two maps and notice the overlap

The military have also used violence, but that does not make them Islamists. Since the ouster of Morsi, they have used deadly force against their own people. This was a coup that was not only wrong but was also a terrible mistake since Morsi and the MB would probably not have been reelected in a future election. If they would have refused to hold elections, the people would protest strenuously.

The use of violence by the military was disastrous. It prompted the violent reaction of the MB, which not only executed police and army personnel but also destroyed many churches, primarily Coptic.

Thankfully, the Copts did not respond in kind by burning mosques, as has happened in Nigeria, but they feel very much threatened by the MB and the sectarian violence that is directed especially against Christians.

The military have lost much of the good will and support of ordinary Egyptians through this bloodshed. As a result of the bloodshed, the MB have only added to their reputation for incompetence and abuse of power.

But the worst mistake of the military was to ignore the yearning of ordinary people for dignity. The people no doubt wanted to get rid of the apparatus of a police state, but they also desired better lives, decent jobs and certain basic freedoms. That was why Mubarak was deposed two years ago. The old, ailing dictator will never regain power, even though he has just been released from prison. But he will be put on trial again. 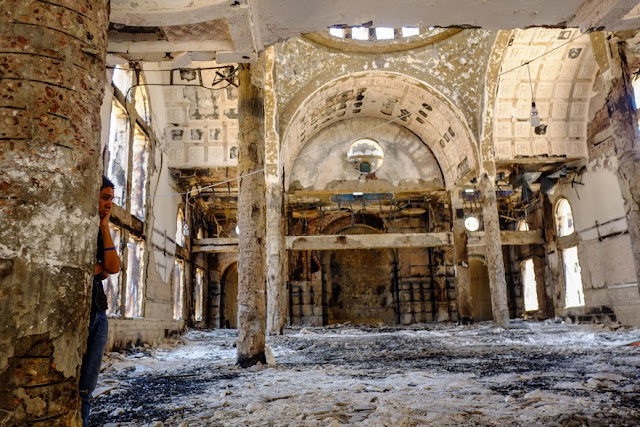 A church torched by the Muslim Brotherhood

The military will have to deal with the needs of the ordinary people but they also have with the Islamists who make up about 30% or so of the population. They want to ban the MB, but that will drive them even further underground than they were before. That would be foolish and counter-productive.

They must find a way to co-exist with the MB. To ban them would play into the hands of Egyptian jihadists, as well as those elsewhere. It would also provide fertile ground for the further growth of al-Qaeda. Jihadists in northern Africa have already vowed to support their Islamist brothers in Egypt.

If the military want a stable Egypt, they should draw back from the brink and return to their barracks. After that they must start negotiations with the MB, as odious as that might seem to them as well as many ordinary Egyptians. The MB remains a force to reckoned with in Egypt simply because of the large support they still enjoy among the populace.

For the MB, it will also be difficult to take part in negotiations, given their treatment at the hands of the army. The negotiators must set a timetable for parliamentary and presidential elections. In spite of their propensity for violence, Islamists too must be included when a new constitution is hammered out.

The animosity on both sides can be overcome. Egyptians eagerly seek an end to the bloodshed. Continuing violence will only drive the military and the MB even further apart. 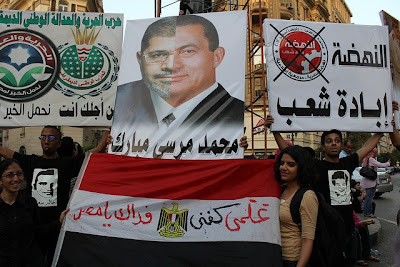 I would suggest that Morsi too must be given a place at the table, even if he is not restored to the presidency. The Egyptian people would never accept that, but the MB might make that a condition for their participation.

The outside world must also respond to this bloody crisis, and not continue to bury its collective head in the sand. The US especially should stop the pretense that this coup was not a coup. It should, therefore, withhold further military aid until a civilian government has been elected and installed. In addition, in spite of their hatred of Islamism, Saudi Arabia and other Gulf countries should stop bankrolling the Egyptian military.

It has often been observed that Egypt has never had a proper democracy. Many of its people are illiterate and live in poverty. Yet they have shown their willingness to fight, and even die if necessary, for a government that will help solve their problems. They turned out en masse to oust Mubarak and and later Morsi, and they will do so again if the need arises. But the violence that is being perpetrated by all sides must stop.

Egypt must not be allowed to go down the same road to civil war, as is Syria right now. The massacre, when about 900 people, many of them children, died as result of a chemical attack allegedly orchestrated by the Assad regime. Let us pray that that does not happen in Egypt. In fact, violence in both countries must stop!