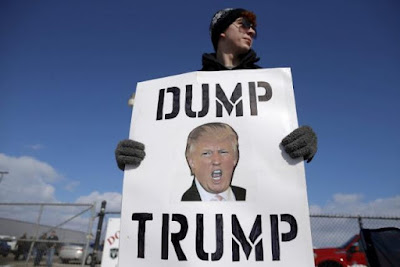 With the US election only two weeks away as I am writing this, I hesitated about writing another post about Donald Trump. We are so offended by him that in our house that we have started referring to him as, "He whose name will not be mentioned." However, I do want to mention this letter from a large number of evangelical leaders which expresses much of what I would want to say in the waning days of the election campaign. Even though I am not an American, I feel strongly that Christians, as well as all people of faith, must speak out strongly against what this man stands for.

At the beginning of October, a very diverse group of evangelical Christians published a letter condemning Republican presidential nominee Donald Trump and his candidacy. In it they argue that his campaign "affirms racist elements in white culture" and is, therefore, unacceptable to them as Christians.

The letter, which was signed by nearly 80 prominent evangelical leaders, thinkers, authors, and pastors, decries Trump’s attacks on women, Muslims, immigrants, refugees, and the disabled, saying such vitriol is an affront to the Christian faith. The signatories say they reflect a more diverse coalition of evangelicals than what is often portrayed in the media or has been courted by Trump:


A significant mistake in American politics is the media’s continued identification of ‘evangelical’ with mostly white, politically conservative, older men" the statement reads. "We are not those evangelicals. 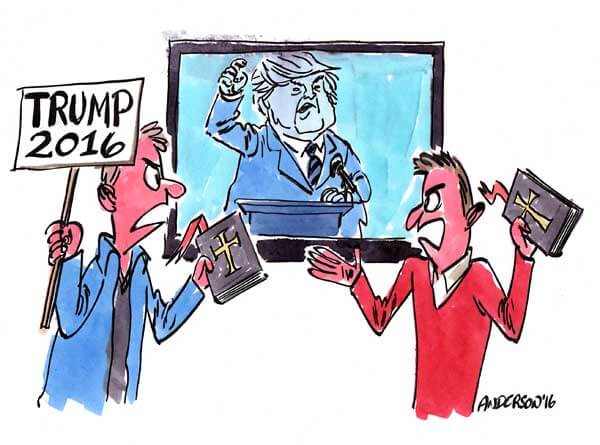 They describe themselves as diverse in ethnicity, gender, age, denomination, churches, and political orientation. They are also growing. They add. "Given the rich diversity within our unity, we call upon the political world to hear all our voices, and for the media to acknowledge that the evangelical community is quite diverse."

They explain: "As evangelical Christians, we believe our hope and allegiance rests in the person of Jesus Christ, Savior of the world, and Lord of our lives."  For this reason, they insist they are not partisan, although some people dismiss them that way. That is not fair, as they add:

That is why no politician, party, movement, or nation can ever command our ultimate loyalty. As citizens both of the Kingdom of God and this world, we vote with humility, knowing that our favored candidates always fall short of biblical values. We recognize that despite our unity in Christ, we will inevitably disagree about which political stances come closest to the heart of God for our nation.

But this letter was prompted by the candidacy of Donald Trump. They begin by declaring: "Imperfect elections and flawed candidates often make for complicated and difficult choices for Christians. But sometimes historic moments arise when more is at stake than partisan politics--when the meaning and integrity of our faith hangs in the balance. This is one of those moments." 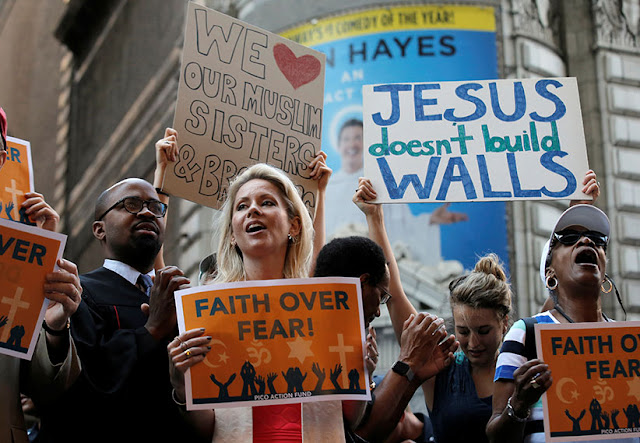 Trump's campaign, they insist "is the most recent and extreme version of a history of racialized politics that has been pursued and about which white evangelicals, in particular, have been silent." They bemoan that silence and attribute the current political environment to it.

They conclude with the affirmation:"We, undersigned evangelicals, simply will not tolerate the racial, religious, and : gender bigotry that Donald Trump has consistently and deliberately fueled, no matter how else we choose to vote or not to vote."  And they invite other evangelicals to join them in this declaration.

While the signatories had no shortage of criticism for Trump, they carefully avoided endorsing his opponent, Democratic nominee Hillary Clinton. That is an indication of their non-partisanship. This letter is directed against Trump, not the Republican party, although Republicans chose him as their candidate. In this election, some Democrats and Independents will also vote for Trump. That is to whom this letter is addressed, not to the parties as such.

Evangelical leaders, like all other voters, should be allowed to voice their political preferences publically. The signers of this declaration did so publically, but in a private capacity and not as a representative of any church. 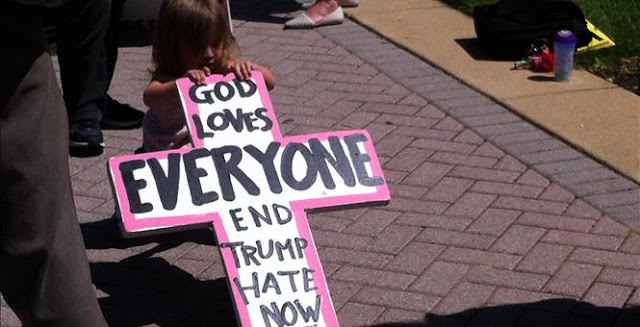 Churches as institutions, have to tread carefully so that the gospel is not used for political ends. That would be a misuse of the gospel. But there are times when the gospel compels people to action. That is the case now, as these evangelical leaders insist:


Because we believe that racial bigotry has been a cornerstone of this campaign, it is a foundational matter of the gospel for us in this election, and not just another issue. This is not just a social problem, but a fundamental wrong. Racism is America's original sin. Its brazen use to win elections threatens to reverse real progress on racial equity and set America back.

That is bold language. It requires courage to speak so boldly, but sometimes the times demand it. This is what the Barmen Declaration did in 1934. The Theological Declaration of Barmen, to give it its full title, was a document adopted by Christians in Nazi Germany who opposed the German Christian) movement.

In the view of the delegates to the Synod that met in the German city of Barmen in May 1934, German Christians had corrupted church government by making it subservient to the state and had introduced Nazi ideology that contradicted the Christian gospel into the German Protestant churches.

The Declaration was mostly written by the Reformed theologian Karl Barth but was modified as a result of input from several Lutheran theologians. I do not mean to imply that Trump's campaign should be equated with the Nazis, but rather that the racism that Trump trumpets demands a similar response from Christians today. 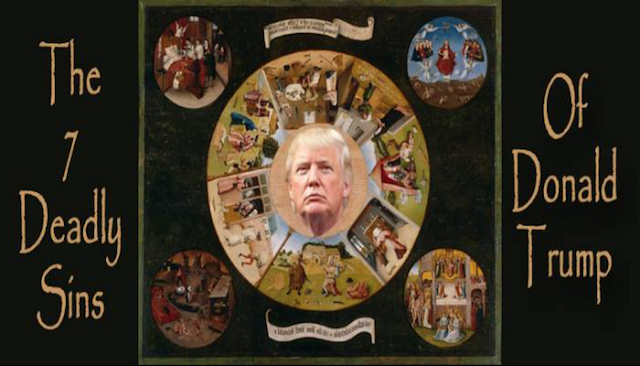 Racism and misogyny and the other activities (read, sins) that Trump tries to make respectable have no place in the public square where politics is played, much less in the churches where believers go to hear the gospel. But that same gospel can and, indeed, must also proclaimed in the public square.

Contrary to what some evangelical Christians maintain, religion and politics do mix. Religion influences politics and politics influences religion. Most of us would agree since there are many historical examples that can be adduced to prove their mutual influence. They do mix.

I admit that politics should not play a role in the church and the church as an institution should not interfere in politics. But that does not mean that Christians must desert the public square and avoid politics. That would be foolish. That way politics is left to non-Christians (such a Donald Trump).

Christians, whether individually or as a group, can and should speak out in the public square since that is where politics is done. That is what those who signed this letter have done. They write:

We see this election as a significant teachable moment for our churches and our nation to bring about long-needed repentance from our racial sin. Out of this belief, we have written this declaration, inviting you to be part of what we have learned from one another and long to see in the churches and the world—a commitment to justice and the dignity of all human lives. 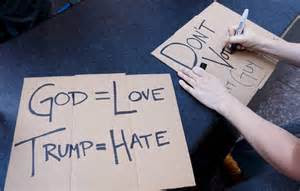 And thus they invite others to join them in their protest: "We invite you to stand with us, join in this declaration, and pass it along to your friends, congregants, pastors, students, and the diverse evangelical church."

Instead of condemning these leaders, as some have done, you and I should add our signatures to this long and growing list. More than 80 people have signed the published version. Others have done by signing the petition at change.org. I invite you to affix your name to this important document before the election. You can do so by using this link just as I did.

If you are an American, you can also cast a vote against Trump by voting for one of the other candidates. If you don't want to vote for Clinton, you can leave that part of the ballot blank. The important thing is this: don't vote for Trump!