The causes of violence in Nigeria 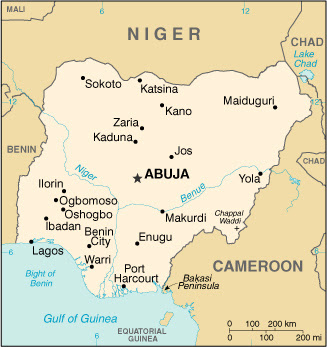 Violence is almost a way of life in Nigeria. Riots occur so often that the world generally pays little attention, except when there is major loss of life. Last week there were more bombings and killings again in Jos, the city where I taught for six years, and which I still visit regularly.
But last week the attention of the world was focused on 9/11, and thus few of the media noticed what happened in Jos after the end of Ramadan.
I have witnessed violence in Jos first-hand. I have seen truckloads of bodies being dumped in mass graves; the charred remains of churches, mosques and commercial building, as well as the hulks of cars and trucks, served as mute testimony to this violence. 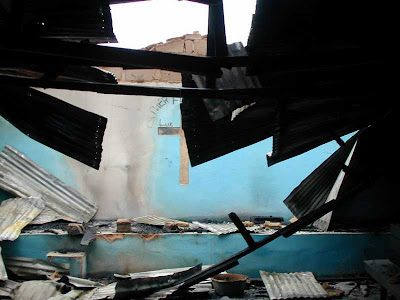 The ruins of Immanuel Baptist church, which has been burned down three times--
the sign in the front of the building reads, "Father forgive them"
What are the causes of violence in Nigeria? In order to help explain them, I want to focus on Jos, where much of the violence has been concentrated during the last decade.
Many journalists blame religion for the violence in the world today. They regard religion as divisive. While religion indeed plays a divisive role in Nigeria, there are other factors as well that are too quickly overlooked: politics and ethnicity, which is another way of saying tribalism.
Religion, politics and ethnicity are not separate issues in Nigeria. It is difficult to unravel these strands that are so tightly interwoven.
In Plateau State, in Nigeria’s “Middle Belt,” the central region between the Muslim-majority North and the largely Christian South, various Christian ethnic groups co-exist uneasily with Hausa settlers who are predominantly Muslim. 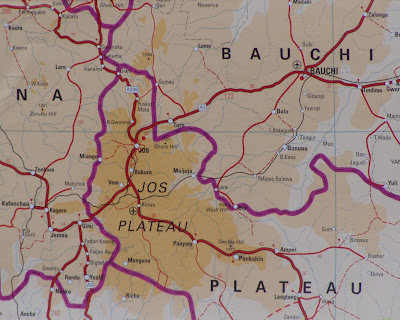 Jos is located in the northwest corner of the state
Jos is the capital city of the state. This is where these different forces clash most often. There are at least two ways in which these various factors interact.
First, the successive crises in Plateau State represent a contest for resources, especially access to land. A majority of the indigenous people in this state (called “indigenes” in Nigeria) are Christians. Many of these indigenes are tied to the land, and are either peasant farmers or civil service workers.
The Muslim minority, many of them Hausa settlers, tend to be dry-season farmers or engage in cattle rearing (the Fulani), although they also engage in business. In Jos, most business is dominated by ethnic groups that come from elsewhere in Nigeria, especially the Igbo, Yoruba, and Hausa.
Pressures to obtain land were exacerbated after 1986 with the Structural Adjustment Program, which was imposed by the IMF. This led to many public servants, company workers, and military personnel being forced to retire. Many of them returned to the land in order to survive, which exerted great pressure on limited land resources, and made land a highly prized possession.
One result was that the mostly Christian indigenes refused to accept the land claims of the predominantly Muslim settlers. The ancestors of many of these settlers came to Jos more than a century ago when the tin mines needed workers. But today Muslims claim that they are still not accepted or accorded the same rights as indigenes.
Second, this issue has become acute because of political rivalry between indigenes and settlers. In Jos the struggle between the Hausa-Fulani and the traditional native tribes (Berom, Anaguata, and Afisare) has become a major factor in the Jos crises as these groups contended for political control.
The main point that Muslims make is that they are disenfranchised in Plateau State by being excluded from public office through the manipulation of elections. They claim that they constitute the majority in both Jos and Plateau State.
Christians retort that Muslims are not in the majority in the state, and they are not excluded from the political process. If they do feel disenfranchised, Christians add, this is no different from what Christians from the Middle Belt or the South experience in northern Muslim-controlled states, even though they have lived in the North for many decades.
Muslims blame Christians for the violence. Again, Christians refute this claim. A careful study of all the conflicts in Nigeria between Christians and Muslims over several decades revealed that Muslims always start these riots and are the first to resort to violence.

A photo taken from near our house, with the nearby market in flames
For many decades, Christians were rather politically apathetic. They regarded politics as something evil and responded to violence by heeding the biblical injunction to "turn the other cheek." But in the last decade the attitude of Christians has changed. They have become active in politics, no longer allowing Muslims to dominate the political stage.
With the rising influence of Christians, it is not surprising that Muslims feel excluded in states such as Plateau. But it helps to explain the claims of disenfranchisement by Muslims, who have lost a lot of political strength, not only nationally but also at the state and local level.
In addition, Muslims feel that, where they are in a majority, they should have a Muslim ruler. Thus it is hard for them to cede the reins of power to Christians, even when they are no longer in the majority.
In Nigeria there are now more Christians than Muslims, at least according to Operation World, which claims that at the turn of the century more than 50% of the population was Christian, about 40% Muslim, and the balance was traditional religion. Muslims, not surprisingly, dispute such statistics.
There are no reliable statistics in Nigeria regarding religious adherence, since religion is specifically excluded from the census forms. The most recent census in 2007 again did not list this politically explosive category.
But in Plateau State, and even in Jos itself, Muslims do not seem to be in the majority, although they are very numerous in Jos North, especially in some areas immediately surrounding the university.
As part of their change in attitude, Christians have also become proactive in protecting themselves. Now they do retaliate when attacked. And if churches are burnt down, they respond by burning down mosques, although that is not an appropriate biblical response. 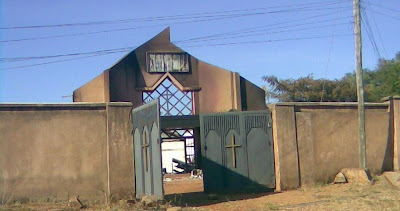 The ruins of the Anglican church, where we often worshiped, near the university
In the various classes that I taught at the University of Jos over past few years, I tried to dissuade my students from resorting to violence, even if only in retaliation for Muslim violence.
Early in my work at the university, I prepared a discussion paper on active non-violence for a workshop at the Unijos. It was later published and widely used.
Many of my students were pastors and church leaders, and thus they needed to set a good example for their people. They certainly should not initiate violence or incite others to do so.
The Bible does not condone violence. Those who do initiate violence or retaliate in violent ways I prefer to describe as “so-called Christians.” Nevertheless, I admit that it is hard for me to say that to people who have lost their churches, businesses, and homes to violence.
It is important that Nigerians deal seriously with the problem of land ownership, the status of indigenes and settlers, and the consequent disenfranchisement of large sections of the population within their own country.
They need to take the conversation far beyond the rhetoric of simplistic reporting about religious violence by the media. The fundamental issue is one of human rights that all Nigerians should be able to enjoy by virtue of citizenship.
The difficult issue of political corruption only exacerbates perceptions of injustice. Yet, if these issues are not addressed adequately, we may well expect the Jos crisis to repeat itself every few years, especially when there are elections. 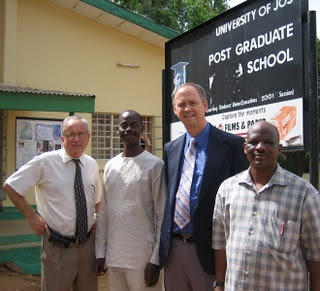 Danny McCain is second from right, together with two graduates
who had just defended their doctoral theses, I am on the left
I am very thankful that Christians and Muslims have recently started working together to try to quell violence in Plateau State. My colleague at the University of Jos, Professor Danny McCain has played a leading role in initiating these discussions. They are trying to enlist young people, who might otherwise be rioting, in promoting peace in this state.
Let us fervently pray that another crisis does not happen, either in Jos or anywhere else in Nigeria.