Wall Street: the deification of greed 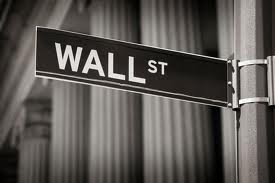 The main message of the Occupy Wall Street protest is crystal clear: Wall Street is synonymous with greed and this greed must stop. But this message is not new.
The Bible describes greed as the worship of Mammon (see image below). In Dante's Purgatory, the greedy penitents were bound and made to lie face down on the ground for having concentrated too much on earthly thoughts. Thomas Aquinas calls greed "a sin against God." Greed is indeed sin, although the modern world rejects that term and the idea that greed is therefore wrong. 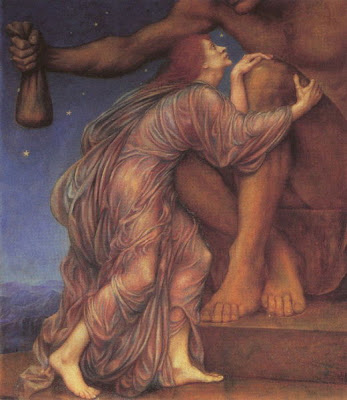 Karl Marx called high finance "the Vatican of capitalism." He was probably thinking of London, which was at that time the financial center of the world, just as New York City is today.
The financial center of Canada is located on Bay Street in Toronto. The City and Bay Street are just other versions of Wall Street. There are many more "Wall Streets" all over the world. If something walks like a duck and quacks like a duck, it must be a duck.
Wall Street is not merely synonymous with greed but it has deified greed. Greed has become a god. Thus it is assumed to be good.
Ivan Boesky, who is infamous for insider trading, defended greed in a well publicized commencement address on May 18, 1986, at the School of Business Administration at the UC Berkeley. "Greed is all right, by the way. I want you to know that. I think greed is healthy," he famously declared. "You can be greedy and still feel good about yourself." 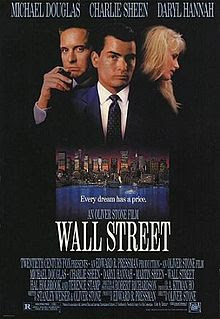 His speech inspired the 1987 film Wall Street, which is noted for the well known lines: "Greed, for lack of a better word, is good. Greed is right, greed works. Greed clarifies, cuts through, and captures the essence of the evolutionary spirit. Greed, in all of its forms; greed for life, for money, for love, knowledge has marked the upward surge of mankind." 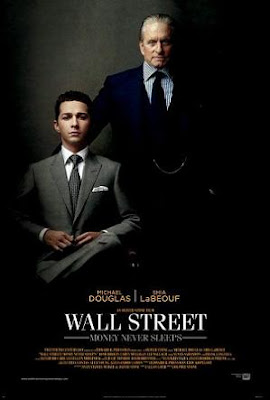 The 2010 sequel, Wall Street: Money Never Sleeps, followed on the heels of the 2008 financial crisis and tries to put this crisis into context by reducing it to the personal level. Yet this film too, as its predecessor, is built on the greed of the main characters. Greed is still perceived as a god, a good god, one in whom people place their trust. 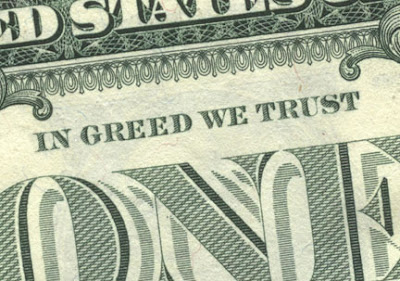 The Occupy Wall Street demonstrators have tapped into is a long and vibrant tradition that culminated in the Great Depression. Then, as now, there was no question in the minds of "the 99 per cent" that Wall Street was principally to blame for the country's crisis.
"Stop the Greed" aptly expresses the mood of "the 99 per cent" today, but it was equally appropriate many decades ago. Little has changed. 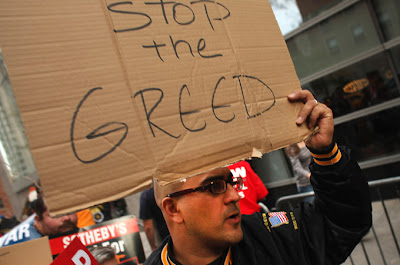 During the past decades many more stories have accumulated of Wall Street greed and arrogance, and astonishing tales of incompetence and larceny. The economy slowed and has now stalled. People have lost their homes and jobs. No wonder people are frustrated and have taken to the streets in protest.
Meanwhile, the political system has proved to be as bankrupt as the big banks. A bipartisan consensus has emerged, but only around the effort to save the "too big to fail" financial goliaths, while nothing was done about the legions of victims their financial manipulations had left in its wake.
This was true not only during the Great Depression but also today. History is repeating itself.

Then the political class prescribed what people already had plenty of: another dose of austerity, plus a belief in a "recovery" that, for 99 per cent of Americans, would never be more more than an optical illusion.
This is happening again. In the Depression the hopes of ordinary people for a chance at a decent future withered and bitterness set in. People today too are suffering "a hangover" from the shenanigans of the one percent.

The American people elected President Obama because of his promise of change. But on Wall Street little has changed. The arrogance and corruption have continued unabated. Wall Street tycoons received their bonuses while millions lost their homes.
These millions and others like them have now cried, "Enough!" They want to storm the bastion built on greed and tear down its walls. 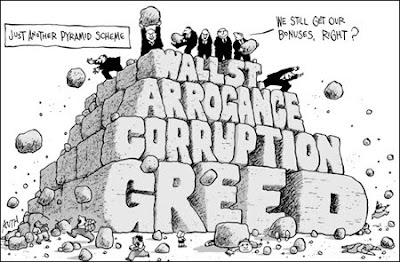 People are enraged that only a handful of executives of major corporations have been sent to prison. The majority have escaped even a slight rap over the knuckles. They have purchased the services of the best lawyers and accountants so that their financial shenanigans are hidden from public purview.
When exposed, however, they can still avoid any legal repercussions for their morally reprehensible actions through their political influence.
They control the levers of power at every level of government everywhere, as the Occupy protesters are quick to point out. They finance the Tea Party movement, and manipulate it to serve their own ends. Why else do Republicans resist all attempts to raise taxes, especially on the rich? 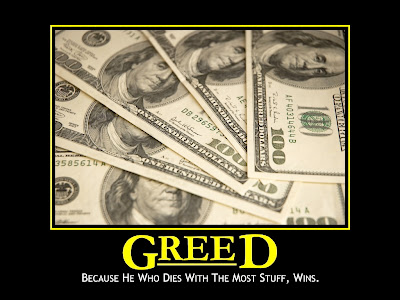 Greed is a sin that all people are heir to, not only the rich. The people who bought homes with sub-prime mortgages were just as greedy as the bankers who lent them the money. They wanted to purchase something that would ordinarily have been beyond their means. Their behavior, of course, does not excuse the excessive  zeal of these bankers to lend money to them.
While greed is endemic, the actions of the one percent who personify Wall Street are reprehensible and merit moral if not legal condemnation. This is what the Occupy movement is doing not only in NewYork City but in cities all over the world.
The powers that be are using every tool at their disposal to evict protesters from their venues. So far the protesters have refrained from using violence. Non-violence is the only way they can retain the moral high ground, even when the police resort to violence.
In the US the Occupy movement has called, among other things, for a constitutional convention starting on July 4, 2012, to propose many changes to the current system. That seems a reasonable demand.
None of the changes suggested thus far will eliminate greed, but they would help to restrain the major excesses that are currently on display. The movement is striving for a more egalitarian system which will aid all the people and not only the rich. Let us pray that will happen soon. 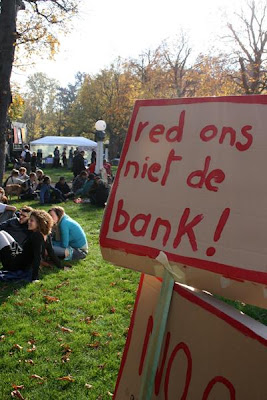 Protest sign in Ghent: "Save us, not the bank"