Protecting the Christian minority in the Middle East 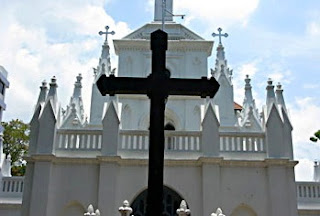 How can the Christian minority best be protected throughout the Middle East, but now especially in Syria? As will be readily apparent, there is no simple solution to this problem, which has become more acute after the massacre in Houla of 108 men, women and children.

The world was properly outraged. Many voices are demanding military intervention, but that is only one of various options: some of them are ineffective, while others, such as military intervention, are very difficult to implement. There is little public will to pursue the latter, although some variant of it looks increasingly likely. As I asked already in my previous post: What can the world do? At the moment, very little.

The Russian Orthodox Church (ROC) just came out with a statement strongly opposing military intervention in Syria. The ROC is worried what might happen to the Christian minority if President Bashar al-Assad is forced from power. Christians, it is claimed, have been reluctant to join the Sunni Muslim opposition in the uprising against al-Assad, fearing persecution at those same hands if he were to fall. 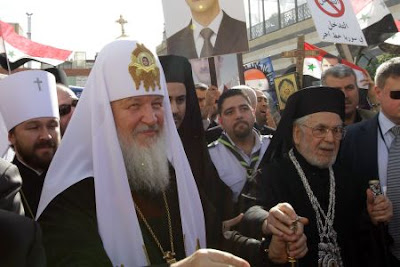 Christians in the past have enjoyed a relatively high degree of religious tolerance and ability to worship freely. But this has now changed dramatically.  As the fighting has continued, Christians now find themselves caught in the middle. They are generally seen to be pro-Assad because he has assured them that their future is more secure with him in power.

Whether the Christians indeed support the regime as extensively as some reports suggest is something that is difficult to determine. Many Christians, no doubt, are afraid of the Islamist influence on the uprising, but they are also afraid of the shabiha militia that the regime uses to punish the opposition and their supporters.

The perceived pro-government stance of the Christians has led to opposition forces attacking churches. Church leaders have reported Muslim neighbors turning on the Christians, and that Muslim extremists from other countries have been coming to Syria to join the fighting. Christians have also suffered kidnappings and gruesome murders. Life is exceedingly difficult for Christians in Syria.

Christians constitute about 10% of the population in Syria. The ROC, which has long had close ties with many Christians there, is concerned that these believers, most of whom are Orthodox, would be swept away by a new wave of Islamic fundamentalism when the current regime is gone.


The largest Christian denomination is the Greek Orthodox Church of Antioch, closely followed by the Melkite Greek Catholic Church, and then the Syriac Orthodox Church. In addition, there is the Armenian Apostolic Church, as well as several Protestant churches. The city of Aleppo is said to have the largest number of Christians in Syria, although there are also other sizable Christian communities (see chart below). 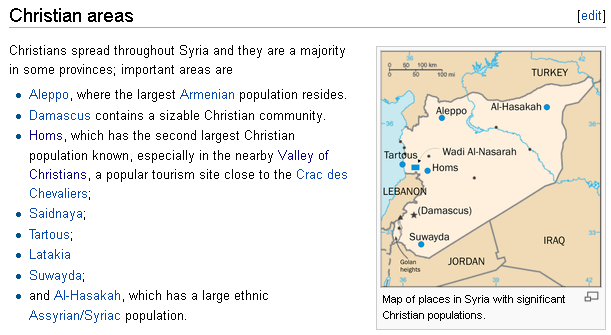 The ROC saw what happened in Iraq after the ouster of Saddam Hussein when one million Christians left the country. They are fearful that this will also happen in Syria, and throughout the Middle East, where they realize that the number of Christians has been steadily declining.

It is dropping due to such factors as low birth rates as compared with Muslims, extensive immigration, as well as persecution, which has intensified in recent decades. It is estimated that at the present rate, the number of Christians in the Middle East will likely drop from 12 million to 6 million by the year 2020.

Today Christians make up only 5% of the population of the Middle East, which is down from 20% in the early 20th century. Cypriot Greeks live in the only Christian majority state in this region.

The worsening political and security situation during the fifteen months of uprising has left a huge negative impact on the lives of all Syrians in general, and Christians in particular. The economic sanctions that forbid any exports from Syria and the transfer of hard currencies to Syria have made the struggle of the poor to gain their daily bread much more difficult. 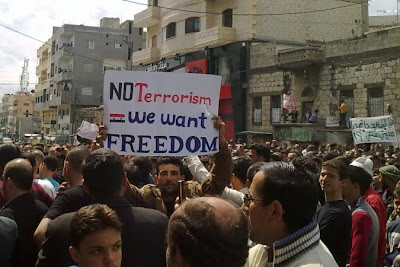 The majority of Christians in Syria used to belong to the middle-class society who depended largely on their work to provide the basic needs for their families. But now many live in dire need, since many have lost their jobs. Moreover, the situation of those who have lost their homes and were forced to seek refuge in other areas has become even worse.


During this conflict, the majority of church leaders from different confessions and rites have expressed their concern toward the escalation and violence and the repercussions on the minorities, and they have called for their communities to remain calm and to avoid taking sides in this conflict.

Some Christians, however, have taken a strong stance in support of the revolution. Part of their statement reads: "We strongly condemn the attempts of some regime benefactors and thugs to create a schism between Syrian Christians and their fellow citizens who are sacrificing their lives for a better Syria. We would also like to draw attention to the dangers of such actions as they lead to the break-up of national unity and social cohesion among citizens."

The general feeling among the Christian communities is a deep concern based on the reality that where the Arab Spring has flourished, political life has become more fanatic and less tolerant of recognizing equal rights for Christians. Even Tunisia, where the former regime demonstrated a thoroughly secular approach and tradition for more than 50 years, has now turned into an Islamic-dominated government. 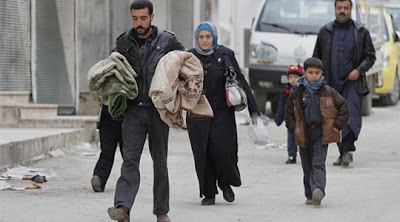 The two and a half million Christians in Syria are afraid that the civil war there will result in their being forced to emigrate or face death. That was the choice for many Christians in Iraq, some of whom ironically wound up in Syria. However bad Assad is, he did not especially persecute Christians.

But that will not be the case if and when Al Qaida and other Islamist extremists in the opposition become more powerful. Though these fanatics are not a majority within the opposition, the fog of war is likely to provide them with cover for their anti-Christian attacks.

For the moment, the regime continues to provide protection to the Christian communities in almost all places where it still controls the ground. Yet in Homs about 200 Christians were killed after protesters and Islamic groups gained control of a part of the city where these Christians lived. Christians are concerned too about terrorists who can target anyone anywhere, even Christian military officers and their families in their homes, with impunity.

The response of the ROC is one-sided and does not properly recognize the complexity of the situation. The stance of the church is very much in sync with that of the Russian government, which is strongly opposed too to outside intervention in Syria, which it regards both as a partner and as its last foothold in the Middle East. While the ROC does not determine Russian foreign policy, it does make a resolution of the Syrian crisis that much more difficult. 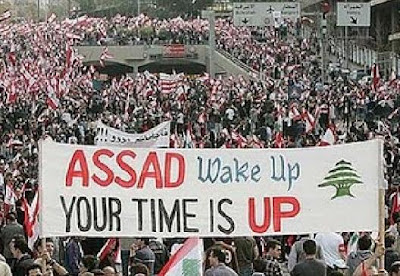 Should the global Christian community lend their support to the position adopted by the ROC? Hardly! The choice ought not to be between support for an oppressive regime, because it purports to protect their co-religionists, or the adoption of a stance in support of the opposition so that, one day, the killings may stop and peace reigns once more in Syria.

Whether Russia is the best option for resolving the crisis through diplomacy, because of its close relationship with Syria, as I suggested in my last post, remains to be seen. The intransigence of the ROC, as exemplified in its recent statement, does not bode well, especially since this merely strengthens the prevailing  Russian attitude.

Christians should not have to face the dilemma of choosing between such alternatives as support for fellow believers or of ending tyranny. But that is a false dilemma, since these alternatives are not as clear as people, including the ROC, might wish. It is not at all clear what the fate of Christians in Syria might be, not is it clear what role the Islamists will play in that country after the ouster of the current regime.

Perhaps the Islamists may soon become the most powerful force in many countries throughout the Middle East. But that development is by no means assured. If so, the world will have to learn to live with that and to do whatever is possible to protect those who will most threatened by it. 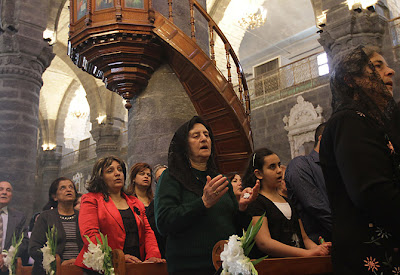 Not everything is hopeless, as Prime Minister David Cameron of Britain recognized in his Easter speech at 10 Downing Street: “There’s also an enormous danger in terms of the persecution of minorities and particularly the persecution of Christians. Now, Britain is fully engaged in the world; we have the second largest aid budget of any country in the world. We’re one of the few countries keeping our promise to spend 0.7% of GDP on aid, and we do have real influence, real heft in these countries. I think there’s a really important moment, and this is the challenge, is for the churches and Christians to work together with government on agendas to persuade these newly democratising countries not to persecute minorities and to respect Christians the world over and the right to practise your religion.”

While Cameron may have overestimated the role that Britain can play in the new Middle East that is being shaped by the Arab Spring, he is right in stressing the need for Christians and governments to work together to stop the persecution of minorities and to help protect the right of Christians, and indeed of all believers in the Middle East, to practice their faith without hindrance or restrictions.

If that were to happen, then maybe the ROC might not have to pose such a dilemma as they are doing now. The ROC is a powerful body within Russia, but it should not be allowed to defend a tyrannical regime in the name of protecting other Orthodox believers. Would the ROC have done the same if the Christians in Syria were predominantly Pentecostals? The answer is only too clear.

I invite you to comment on the statement of the ROC or on my response. Also, please share what you have discovered about the situation of Christians throughout the Middle East. There are a lot of conflicting facts, and indeed misinformation, that have been disseminated about their situation. Unfortunately, some reports are virulently anti-Muslim and warn ad nauseam about the threat posed by Islamists.

While this threat is real, it should not be allowed to dominate the discussion and determine who is the most deserving of support. At the end of the day, Christians and Muslims must find a way to live together in the Middle East. And the rest of the world must do what it can to ensure that the rights of everyone, no matter what their faith, is protected. 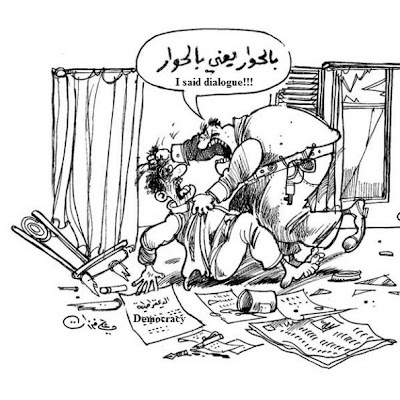