President Obama: love him or hate him 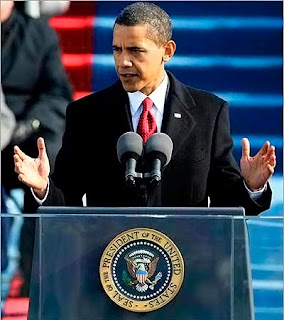 The thousands who came out on Monday, January 21, to witness the inauguration of President Barack H. Obama testified by their presence their love and concern for him.

The inaugural speech that Obama delivered so eloquently was punctuated repeatedly with spontaneous and well-deserved applause. It was a well-crafted speech in which the president appealed for unity in his sorely divided and highly polarized nation.

The crowds may have been less than four years ago, but the Mall was filled with many Obama supporters. He enjoys the support and love of many more Americans than were able to come to Washington on this day. It is clear that numerous Americans love their president very much.

People, it seems, either love or hate Obama. This is a unique American phenomenon. Canadians, for example, typically do not love their politicians, nor do they hate them, at least not like some Americans do.

In the US there is a webpage that calls itself "I hate Obama," while another is called "Americans who hate Obama." These are only the most egregious examples of this hatred; they could be multiplied many times.

Last year the Speaker of the Kansas House of Representatives, Mike O'Neal, sent a widely-circulated email in which he used Psalm 109:8 to suggest about Obama, "May his days be few; may another take his place of leadership,” and in the following verse, "May his children be orphans and his wife a widow."  O'Neal did not resign, even after a petition with 30,000 signatures was delivered to his office.

As Obama embarks on his second term, it is useful to reflect on the nature of this hatred. Where does this hatred stem from? And why the virulence? I don't claim to have the answers to all these questions, but I will make an attempt.

There are many issues that get some Americans so riled up that they want to express their hatred of this man. Obama alluded to some of these issues in his inaugural speech.

Several times he stressed the equality that the Declaration of Independence expresses so beautifully. He referred not only to racism but also to sexual orientation. Obama went further by connecting these individual freedoms with "the freedom of every soul on Earth."

Some Americans reject these freedoms, and especially the man who expresses them. 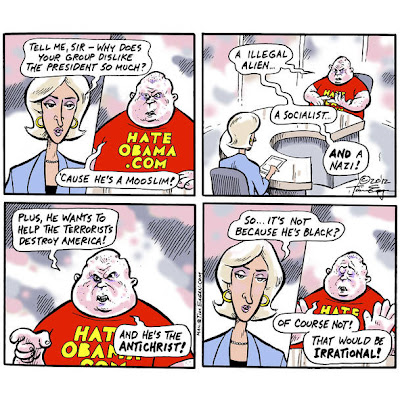 Even some people who call themselves Christians are guilty of racism, whether they are conscious of this or not. After four years, some of them are still not ready to accept a black president.

Obama's courageous reference to the equality that "our gay brothers and sisters" ought to enjoy will not be well-received by homophobic Americans.

The president did not mention the contentious issue of gun control, but he did refer to Newtown and the need for all American children "to know they are cared for, cherished, and always safe from harm."

Obama has been criticized repeatedly for his denial of American exceptionalism. This speech did not glorify the US excessively, but like all inaugural addresses it did not neglect it. It set an agenda, "a journey" he called it, for"the most powerful country in the world," a country in which the "possibilities are limitless."

Admittedly, American exceptionalism does make many people outside of the US feel a little uncomfortable, but it was good to hear Obama lay out a course for his country to follow. 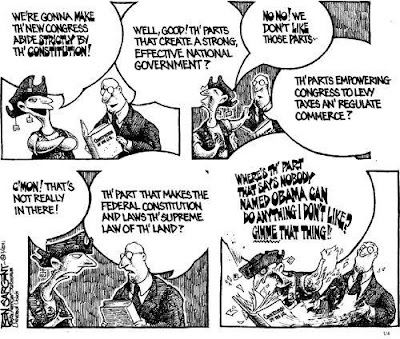 In a departure for the bipartisanship that marked the day, the president had a warning for Republicans: "We cannot mistake absolutism for principle, or substitute spectacle for politics, or treat name-calling as reasoned debate." This warning applies to everyone whose motives are less than loving.

People of faith in the US should examine their motives carefully. If there is any hatred at all, that should be removed. There is no place for hatred in the hearts of believers. Jesus commands his followers, "love your enemies" (Mt. 5:44). You may disagree with your political opponents, but hatred is not permitted.

Frank Schaeffer, the son of the late Francis Schaeffer, who played a leading role in the rise of the political right in the US, asks pointedly: "What is the future of a politicized "Christianity" deeply infected by the politics of hate, intolerance, homophobia, xenophobia, victimhood, racism and willful delusion? Bluntly -- will it be Fox News or Jesus?"

Later in this article, Schaeffer states resolutely: "Christians who care about our country and our faith have a choice: Circle the wagons tighter, deny reality further, hate more, or admit that once again -- as with the race issues of the 1940s through the 1960s -- that most conservative religious Americans have missed the boat of progress, hope and inclusion."

Schaeffer has said and done things that I too disagree with, yet here he lays his finger on some potential painful spots for Christians who consider themselves to be conservatives in both politics and religion. 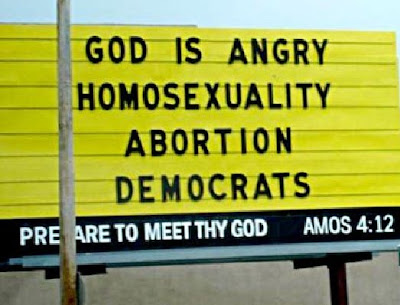 This identity does not necessarily follow in my opinion. Even if it does, people must be especially careful in the causes they espouse. As Schaeffer bluntly demands:  Who influences them more, Fox News or Jesus?

And they must admit that the Republican party has not choose the issues on which the last few elections were fought correctly. They were blinded by their absolutism and, dare I say it, by their hatred of Obama.

I ask everyone to pray for the president of the US. Obama needs your prayers as he begins his second term. There are many problems, both foreign and domestic, that require his urgent attention. Thus he needs your prayers, not your judgment or condemnation.

May God richly bless President Barack Obama in the four years that lie ahead!