Responding to the election in love 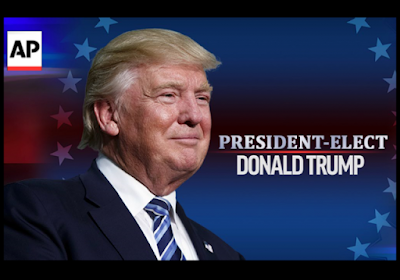 America is deeply divided, as the results of the presidential election show. In the week after the election I witnessed many responses to the Trump victory, ranging from ecstasy to anger. Loud protests are occurring all over the country and even in other countries.

As readers will know, my disdain for Trump is widely shared in Canada, but I did not like Clinton either, even if she was, for me and many others, the "lesser of two evils." Americans throughout the long campaign had strong feelings for one one or the other of the two candidates, so much so that families and churches were sorely divided and friendships disrupted.

Each side found it difficult to understand why other had opted for their own candidate. "How stupid can you get!" was probably one of the milder epithets they hurled at each other. But such reproaches miss the point. Each side can provide very good reasons for why they voted the way they did.

The two sides hardly listened to each other during the campaign. Each was living in their own universe where Fox or MSNBC were the preferred channels to watch. This divide goes back a long way, long before the current election campaign. But it has grown exponentially, and now even threatens the integrity of the country, as I suggested in my previous post.

Trump won the election in the only way that really matters, through the electoral college. Clinton indeed won the popular vote, but that doesn't get her the presidency, at least not until the system is changed. If Americans want to gripe about her losing the election, then they must change the system. Protesting at this point will not change the results. Only a constitutional change can prevent that happening again. 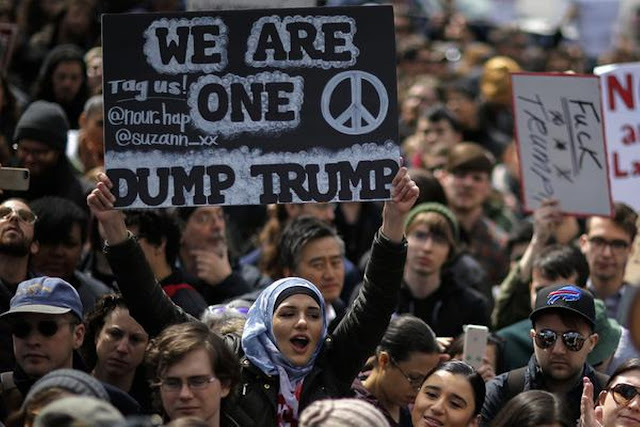 I too have my concerns about Trump as president. Yet nothing that ordinary people like you and me do is going to change him. He is unpredictable, as everyone agrees. Thus the only thing we  know for sure is that the world is in for is a tumultuous four years (at least). Some Americans are already losing sleep over this.

Other Americans might have been equally concerned if Clinton had won. They claimed they couldn't trust her, and thus they were worried about her as president. These worries were real in their eyes, just as those who voted for Clinton were worried about Trump.

Although we cannot change the election result, we can change our attitude to those who voted for the other candidate. They had legitimate reasons, at least in their own eyes, for doing so. Thus we may not blame them. The reasons for Trump's victory should not be laid at their feet.

We may disagree with them, but we must not blame them for the way they voted.. We must respect them. They are our neighbors, fellow church members, or even family and friends, And therefore we should not demonize them. As people of faith we are not allowed to do that.

A friend of mine has written an excellent editorial in which tells us to remember several things in the aftermath of one of the most divisive presidential elections in the US in recent memory. He is writing specifically to Christians who are as divided as everyone in the country is, He calls on Christians to remember several things which I will summarize and then add my own comments. 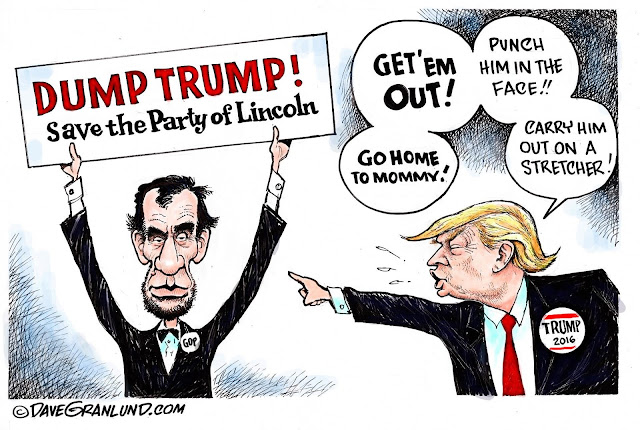 First, he want us to remember that our struggle is ultimately a struggle against spiritual forces. They may seem strange to many Western people, but in the rest of the world the realty of spirits, also evil spirits, is an integral part of their worldview. In fact, the spirit world is more real than this tangible one.

Evil is all pervasive. Good and evil can be discovered in all of us. We all need to be aware that evil is not just outside in the larger world but that it also resides within each one of us. He writes,

If evil resides in every heart, then no one is innocent. None of us is entirely good or evil, although evil, in my opinion, can sometimes take an extreme, personal form, witness monsters like Hitler and Stalin. And there are many currents examples of that as well. Yet neither Trump nor Clinton deserves to be labelled as entirely evil as happened during the campaign and continues to happen even now,

Evil can also take structural forms, as happens in the growing inequality in the world. Inequality is perhaps the main reason for the massive support for Trump. It also underlies the growing popularism that politicians elsewhere in the world are capitalizing on. 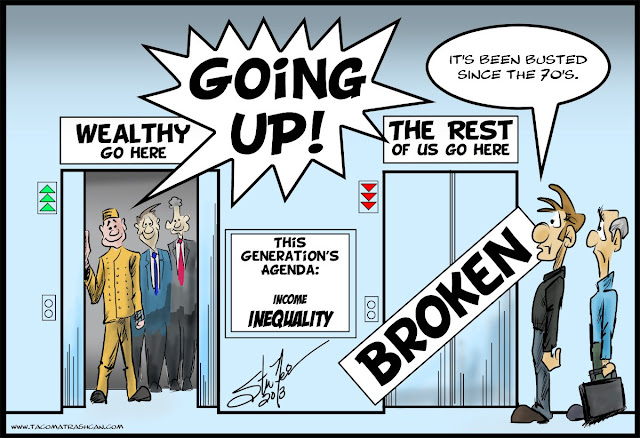 All of us must be careful not to be caught up in the nets of these politicians with their specious appeals. Inequality is very real,but their proposed solutions, as beautiful as they may sound are not always effective. Many people who supported Clinton are equally concerned about inequality. Trump supporters are not the only victims of inequality, all of us are affected and all of us should oppose it.

Just because they voted for Trump doesn't allow us to demonize them. Many had a valid reason for voting the way they did. We must respect their right to do that. If their vote was motivated by hatred that is another matter entirely.

In war the enemy needs to be demonized before they can be killed. In elections the voters are not the enemy, and thus they should not be demonized. To demonize means to disregard their humanity and to treat them as less than human. Christians and Jews cannot do this because they believe every human being is created in the image of God. Thus the commandment not to kill. Other religions have similar prohibitions.

Instead, God commands us to love our neighbors as ourselves. Republicans and Democrats are our neighbors, and.thus we must love each other. Jesus, in fact, commanded his followers to also love their enemies. We must not treat people who voted for other candidates as enemies, but we must love them. Always. That is the only way to heal the wounds caused by the election in families, churches, and among friends.

That love must extend even to those like Trump and Clinton whom we strongly dislike. Like and love are not identical. We must all learn to love certain people that we don not like. We must even love those who spout hatred out of their mouths. There are many political candidates and their supporters who do that regularly. Yet the only appropriate response to hate is love. 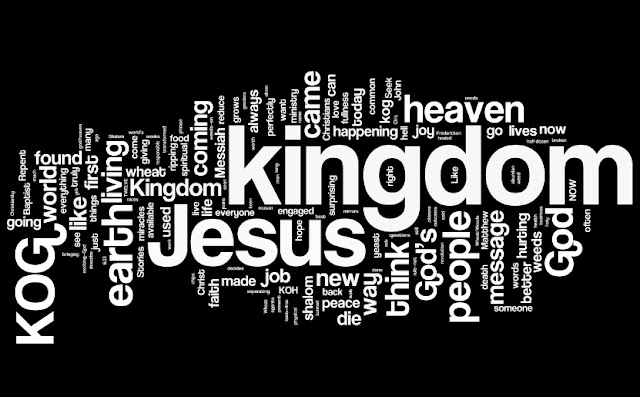 Second, my friend suggests that his readers must remember that their political and social visions, whether Republican or Democrat, conservative or liberal, are not synonymous with what God is doing. God is building a kingdom. but his kingdom cannot be reduced to only erasing racism and poverty nor can it be reduced to ending abortion and protecting religious liberty.

If people voted for Clinton or Trump for these reasons alone, then the scope of God's kingdom is severely restricted. Instead of encompassing the entire universe, people have limited the sphere of God's reign to mundane matters, even if they are important. That is one factor in the current "culture war."

He observes, correctly, that the so-called “culture war” is not identical to the spiritual war. The line dividing good and evil cuts through both sides of the culture war divide. No camp has a monopoly on good or evil, just as no individual is entirely good or evil. Thus we must refrain from making such judgments about others. We must demonstrate love instead of hate.

Jesus Christ alone is Lord. Christians are not allowed to put their faith in ordinary human beings. In the early history of the church, Christians were often compelled to make the prescribed offering to Caesar, but most of them refused to do that. Similarly, today Christian must refuse to grant their allegiance to anyone except Christ. To do otherwise would be to deny Christi's lordship and ultimately to limit the universal scope of his kingdom.

My son-in-law posted this on FB the other day. His thoughts are similar, and thus I want to share them:


In church today we heard "How you voted doesn't change how Jesus thinks of you". This, to me, seems inherently true. If that is the case, then we as The Church should act the same way. How others in our faith community voted shouldn't change the way we think of them...we are still seeking the Kingdom of Heaven in this world together, serving together, etc just like we were before the election...lord, give us courage to treat people as people and give us strength to extend this to all our our relationships...in and outside of church.

Would that many more people would treat others with respect and love! Then the US and the entire world may still experience four very turbulent years, but  Americans will be able to live together again in peace and harmony. That is my prayer.