Love, not hate, should be the response to the Paris killings 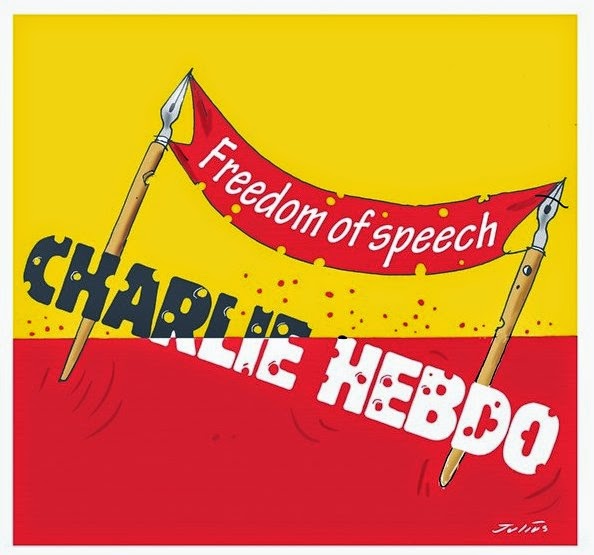 Is freedom of speech really the issue?


In the aftermath of the Charlie Hebdo killings people everywhere are jumping on the "free speech!" bandwagon. Everyone, it seems, is using the Twitter hashtag #JeSuisCharlie" (I am Charlie).

The main issue is really love and respect. I see very little love and too much hatred. I sense a hatred directed against Muslims. In Europe and elsewhere, there is now a strong backlash against Islam. Islam/Muslims are represented are being the "problem." This is in spite of the fact that Muslims face intense discrimination and lack of opportunity from the broader, predominantly white, European society.

Since the killers are all dead, we may never know precisely what motivated them. What people have surmised is that by killing the journalists they wanted not only to punish them for the cartoons about the Prophet Muhammad that Charlie Hebdo had published but also to drive a wedge between the majority of Muslims and the rest of French society, thereby radicalizing these Muslims, 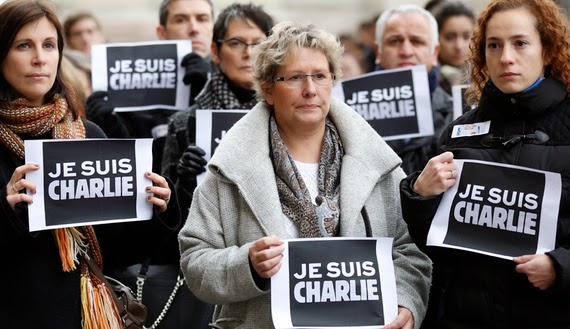 France has about five million Muslims, of whom only a handful can be considered a threat. The majority want little or nothing to do with politics, but they were the real targets of the killers at Charlie Hebdo. Most of them were upset by the cartoons of Charlie Hebdo, but they would not threaten to kill those who drew them, unlike the killers, who stated that they had avenged the Prophet.

As is well-known, those who work at this magazine have for many years gone beyond the mere lampooning of figures, especially of their depictions of religious figures. Charlie Hebdo has a long record of mocking, baiting and needling French Muslims, but it is an equal opportunity publication, since it does the same to Catholics and everyone else.

In spite of the biting satire, killing in response to the perceived insult to Muhammad, no matter how gross, must be unequivocally condemned. That is why what happened in Paris cannot be tolerated. But neither should we tolerate the kind of intolerance that provoked this violent reaction.

Before I continue, I want to ask this question: What do the teachings of Islam actually say about creating images of the prophet?

Nowhere in the Qur'an does it say that images of Muhammad are forbidden. But it is mentioned in the hadith, a secondary text that many Muslims consult for instruction on how to live a good life. Many Muslims are not aware of this. 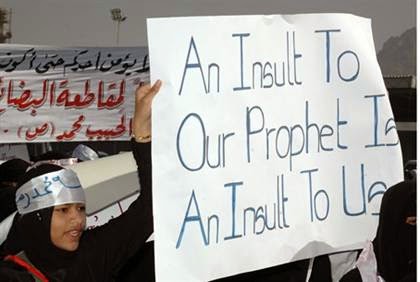 The theological underpinnings of the ban can be traced back to the very beginnings of Islam in Arabia. Early followers of Muhammad held themselves apart from their Christian neighbors, whom they believed to be too deeply attached to icons and images. The ban is also informed by one of the central tenets of Islam -- the idea that the Prophet Muhammad was a man, and not God/Allah.

“It comes from the notion that God is transcendent and that nothing should be put in God’s place,” according to John Esposito, a professor of Islamic studies at Georgetown University. “Anything like that is idolatry. You don’t want to have a statue or a picture of God, because people may wind up praying to it.”

The issue is not unique to Islam -- it has also come up in the other Abrahamic traditions. In Judaism, the Bible depicts God as becoming deeply troubled after the ancient Israelites created and worshipped a golden calf. One of the Ten Commandments forbids the making od idols, The Byzantine Empire saw the rise of the Iconoclasm movement, a name that literally means “image breaking.” The Iconoclastic controversy lasted from the eighth through the ninth century.

These cartoons are not simply drawings of Muhammad. There is a distinct political message behind them, and they border on being outright racist. They have added flames to an already very volatile fire. They are being willfully and purposefully offensive to an already marginalized and disenfranchised group of people.

The killers at Charlie Hebdo were filled with hate for the journalists at this magazine. Yet the proper response is not more hatred, but rather love -- love for Muslims. Love for those who cannot be held responsible, because they were not directly involved. Don't blame an entire group for what a few individuals do.

Such a backlash is unfair, yet it growing, both in France and elsewhere. In Canada, Prime Minister Stephen Harper has already associated the Charlie Hebdo killings with jihadists and used this association to justify Canada's involvement in fighting the Islamic State in Iraq.

Love is also required when it comes to cartoons that some group might not only regard as offensive but may also be contrary to their religion. Charlie Hebdo seems to have had a special dislike of Muslims. In 2005, it republished the Danish cartoon of Muhammad that inflamed many in the Muslim world.

After the killings, the media have almost universally defended the magazine in the name of freedom of expression, Many other voices have echoed this claim. That is indeed a legitimate defense, but I question the wisdom of using it when depictions of Muhammad are concerned.

It is not that Muslims deserve special treatment as compared to other religious groups. They can be satirized like any other group, but when it comes to depictions of the Prophet Muhammad, greater sensitivity is required, since Muslims widely regard such depictions as blasphemy.

Imam Dr. Omar Shahin, the president of the North American Imam’s Federation, does not believe the prophet should ever be represented in an image, but he has emphasized the importance of showing respect for other people's deeply held religious beliefs.

But he insists that the only proper ways for Muslims to speak out against depictions of Muhammad are by taking legal action or by educating the public -- not by committing acts of violence. 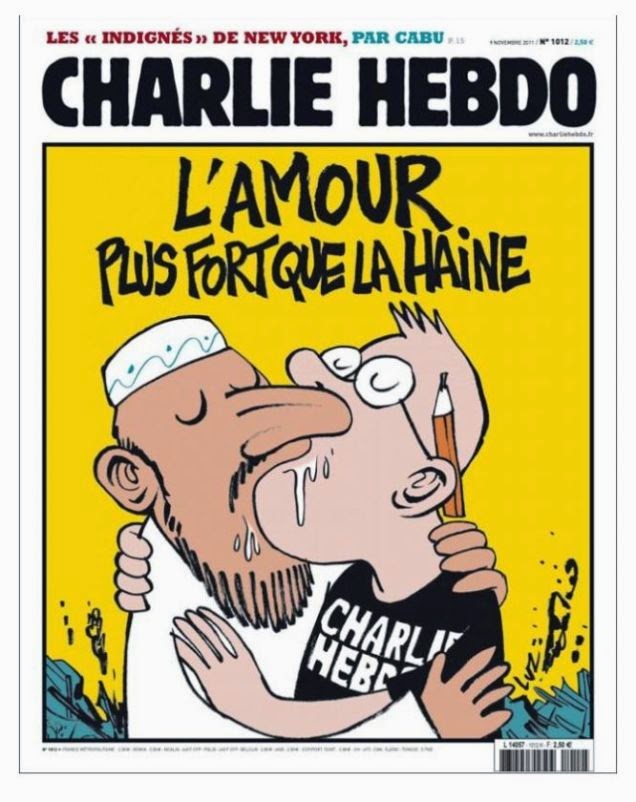 Love is stronger than hatred
Is this really what Charlie Hebdo meant?

Such sensitivity is an expression of love and respect for others. If love seems a strange term to use in this context, remember the biblical commandment to love our neighbor as ourselves. Our neighbor, as Jesus explains, is not merely the people we like but even those we despise. He amplified this when he gave the injunction about loving one's enemies.

Love is required of all of us. We must be sensitive to the way these satirical cartoons of Muhammad offend Muslims: they regard it as blasphemy. Even if Christians are not offended the same way when Jesus is portrayed in an offensive way, that does not mean that they should just stand by when Muhammad is treated the same way.

Freedom of expression is not an absolute right. No human right is absolute: there is always a corresponding duty that balances that right. Love in this case means that we do not side automatically with those who only want to talk about freedom of expression and that we avoid provocative actions such as publishing cartoons that will offend our Muslim neighbors. We must love them sufficiently that we do not add fuel to the fire, but instead, at the risk of mixing metaphors, build bridges to them.

In the past, French officials from former President Jacques Chirac to Foreign Minister Laurent Fabius have accused Charlie Hebdo of pouring oil on the fire of religious tensions. After the Charlie Hebdo killings, the French-- Muslims and non-Muslims alike -- were united in defense of freedom of expression, but deep-seated tensions over the issue continued to simmer under the surface.

"This barbaric act is also an attack against democracy and freedom of the press," read a statement from Dalil Boubakeur of the Great Mosque of Paris, which unsuccessfully sued Charlie Hebdo in 2006 for printing cartoons that it deemed racist. "In an international political context of tensions fueled by the delusions of terrorist groups unjustly claiming to represent Islam, we call on those attached to the values of the French Republic and of democracy to avoid all provocations that serve only to feed the fire."

If hatred of Muslims persists in France and elsewhere in the world, and if French Muslims are turned against the rest of French society, then the Charlie Hebdo killers will have posthumously won the victory. The only way to deny them that is by demonstrating love. 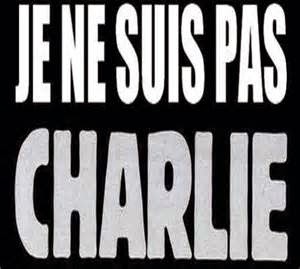 The choice is clear: love, not hate, should be our response to Charlie Hebdon. Nous ne sommes pas Charlie  (We are not Charlie). We must distance distance ourselves from that magazine sufficiently so that we do not support hatred of any religious group, but instead demonstrate our love for our neighbors no matter what their faith is.

I want to conclude with the words that the Apostle Paul wrote in his letter to the Corinthians (13:1-13):

1 If I speak in the tongues of mortals and of angels, but do not have love, I am a noisy gong or a clanging cymbal. 2 And if I have prophetic powers, and understand all mysteries and all knowledge, and if I have all faith, so as to remove mountains, but do not have love, I am nothing. 3 If I give away all my possessions, and if I hand over my body so that I may boast,a but do not have love, I gain nothing.
4 Love is patient; love is kind; love is not envious or boastful or arrogant 5 or rude. It does not insist on its own way; it is not irritable or resentful; 6 it does not rejoice in wrongdoing, but rejoices in the truth. 7 It bears all things, believes all things, hopes all things, endures all things.
8 Love never ends. But as for prophecies, they will come to an end; as for tongues, they will cease; as for knowledge, it will come to an end. 9 For we know only in part, and we prophesy only in part; 10 but when the complete comes, the partial will come to an end. 11 When I was a child, I spoke like a child, I thought like a child, I reasoned like a child; when I became an adult, I put an end to childish ways. 12 For now we see in a mirror, dimly,b but then we will see face to face. Now I know only in part; then I will know fully, even as I have been fully known. 13 And now faith, hope, and love abide, these three; and the greatest of these is love.