The Curse of Islamophobia 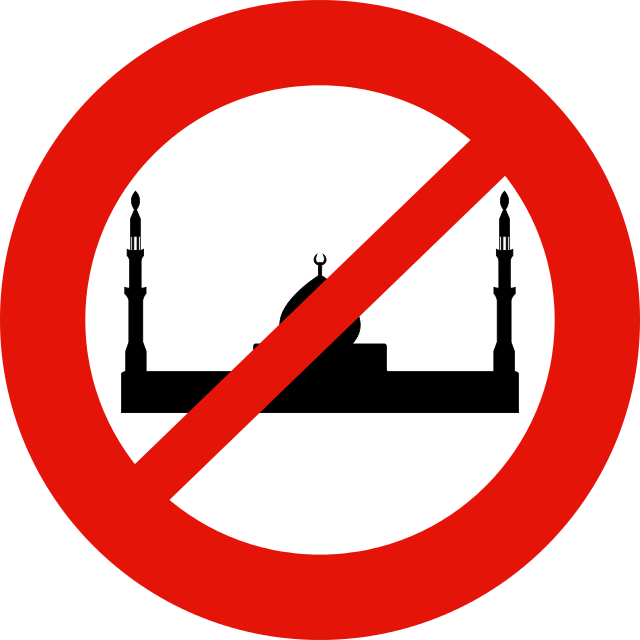 In the aftermath of the Charlie Hebdo shootings there has been a noticeable increase in Islamophobia in Europe as well as elsewhere in the world. In fact, one can speak about a tsunami of Islamophobia, just as at one time there was a tsunami of antisemitism that, unfortunately, has still not abated entirely. In the Middle East and indeed much of the Muslim world it continues to raise its ugly head.

Yet in parts of Europe today, it has become increasingly unacceptable to be an antisemite, although there is still a lot of antisemitism among some younger people. In contrast, Islamophobia has grown phenomenally in all age groups. Some political leaders in Europe and elsewhere have used it for their own political advantage through fostering the fear that lies at the roots of Islamophobia.

I want to restrict my discussion largely to Europe in the post 9/11 period. To do otherwise would be to make it too long. Even so, not everyone will agree with my observations.

The 1991 Runnymede Trust Report defined Islamophobia as an "unfounded hostility towards Muslims, and therefore fear or dislike of all or most Muslims." The report points out that it is based on a number of beliefs about Islam:it is monolithic and cannot adapt to new realities; it does not share common values with other major faiths; it is an inferior, archaic, barbaric, and irrational religion that practices violence and supports terrorism; and it is a violent political ideology.

In some respects, Islamophobia shares much with antisemitism in which there are strong religious,
economic, social, racist, ideological, and cultural factors that are widely adduced to justify the fear and prejudicial behavior that characterize both.

Although the term is much disputed in the academic world, it overlaps with other terms such as xenophobia and racism, since so many Muslims in Europe compose the largest groups of immigrants. Many Muslims have not integrated well into European cultures and constitute a significant and highly visible community in many European countries. 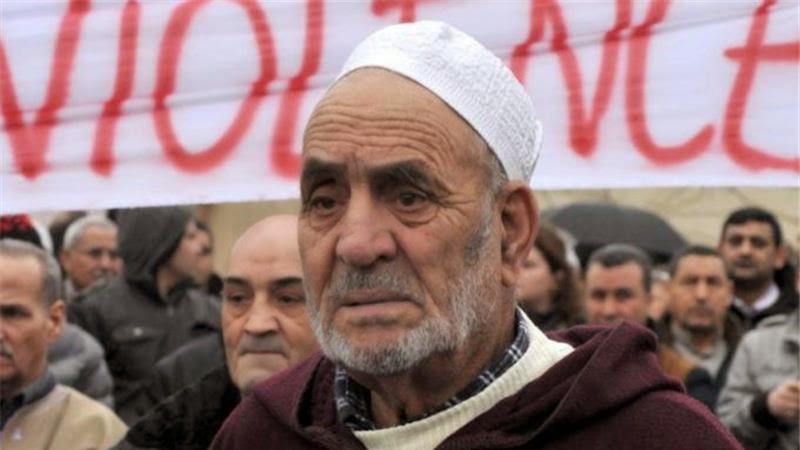 Muslims gather to condemn the attack on Charlie Hebdo in Chateauroux, France [AFP]

Despite recent attempts by German Chancellor Angela Merkel to paint Islamophobic protesters in her country as intolerant bigots, the protests are getting louder and growing in size.

The rallies, which were organized by a new grassroots movement known as PEGIDA, or Patriotic Europeans Against the Islamization of the West, have become an almost weekly event in the east German city of Dresden. Some 18,000 people, the biggest number so far, turned out recently in that city.

Similar rallies in Berlin and Cologne, however, were heavily outnumbered by counter-protesters who accuse PEGIDA of fanning racism and intolerance. The Cathedral in Cologne dimmed its lights to protest Islamophobia,

The PEGIDA protesters waved Germany’s black, red and gold flag and brandished posters bearing slogans such as "Against religious fanaticism and every kind of radicalism." It is ironic that PEGIDA is opposed as well to Nazism and Communism as well as radical Islam.

.
In France, twenty-six mosques have been attacked by firebombs, gunfire, pig heads, and grenades as Muslims are targeted with violence in the wake of the Paris attacks. According to the most recent tally, a total of 60 Islamophobic incidents have been recorded, with countless minor encounters believed to have gone unreported. Islamophobic incidents are nothing new in France.

Armed guards have been placed outside some mosques across the country, including the Grande Mosquée de Paris, which was built in 1926 as a token of gratitude to Muslim soldiers in France's army during the First World War.

Senior French politicians have warned against linking the gunmen with peaceful Muslims, of which France has the biggest population in Europe. French foreign minister Laurent Fabius has said that the word “Islamist” should not be used to described the murderers, but rather “terrorist." He added,"The terrorists' religion is not Islam, which they are betraying. It's barbarity."

It is doubly ironic that the first victim of the Charlie Hebdo killers was Ahmed Merabet, a French Muslim policeman. Yet two of the killers were reportedly of Algerian descent, while the third hailed from Senegal. Thus they were all Frenchmen, not jihadists from the Middle East.

In addition, it should be noted that Merabet has largely dropped off the media radar. His Muslim identity was newsworthy only very briefly. Muslims typically make headlines only when they are carrying guns. The two Kouachi brothers are judged to represent all of France's 6 million Muslims, but not Merabet, the Muslim policeman. All Muslims are considered potential terrorists and should blamed for the Charlie Hebdo shootings. This is clearly Islamophobia.

Malek Merabet,  the brother of the police officer, said, "My brother was Muslim and he was killed by people who pretend to be Muslims. They are terrorists, that's it, Islam is a religion of peace and love. As far as my brother’s death is concerned it was a waste. He was very proud of the name Ahmed Merabet, proud to represent the police and of defending the values of the Republic – liberty, equality, fraternity.”

The number and growth of Muslims in France has spurred some of the most draconian policies against them in modern times. The headscarf ban in 2004, followed by that of the niqab or face covering, in 2010, has codified core Islamophobic ideas. This legislation also functioned as a firm and fervent declaration by the state that Muslim and French identities were at odds and irreconcilable.

But is it? Ahmed Merabet and countless other French Muslims prove otherwise. Which is not to say that they have no problems. The French laïcité model provided the structural underpinnings to carry forward this Islamophobic legislation.

The state aim of compelling secularisation upon its Muslim citizenry was based upon a binary concept of civilizations. French Muslims were given an ultimatum:  choose between "Islam or the West," "Islamic countries or France." The same choice is not demanded of people from other nations. 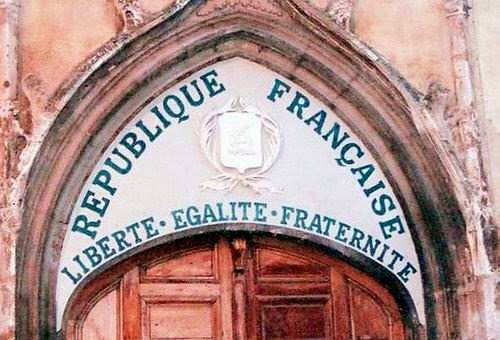 Motto of the French republic on the tympanum of a church, in Aups (Var département), which was installed after the 1905 law on the Separation of the State and the Church. Such inscriptions on a church are very rare; this one was restored during the 1989 bicentenary of the French Revolution.

This enforced secularization is one of the reasons why some French have become radicalized. But there is more. There is also the often-stated factor of religion, although this has been overestimated.

Some scholars have shown there is no empirical evidence to support the claim that religion and ideology are the primary motivators of violent extremism. The revelation that the foreign fighters who joined ISIS had read copies of Islam for Dummies and The Koran for Dummies, underscores this. They know practically nothing about their new-found faith. Some of the world’s most renowned scholars of terrorism agree that other factors play a much larger role.

They cite factors such as anger at injustice, moral superiority, a sense of identity and purpose, the promise of adventure, and becoming a hero have all been implicated in case studies of radicalization. Religion and ideology serve as vehicles for an "us versus them" mentality and as the justification for violence against those who represent "the enemy", but they are not the drivers of radicalization.

In the European context, there is yet one more factor that is often neglected: colonialism. France's 1830 invasion of Algeria, which is where the Kouchi brothers stem from, began a 130-year odyssey of murder, expropriation, racism, exploitation and misrule that only ended after a vicious anti-colonial struggle costing well over one million Algerian lives.

In Algeria, the petroleum-rich FLN state launched a brutal internal war, with the direct support of the West, in order to preserve its absolute grip on power. This story has been repeated countless times in the Muslim world, where -- with the exception of Turkey, Iran, and part of the Arabian peninsula -- most countires, from Morocco to Indonesia, came under European rule in the 19th and 20th centuries. 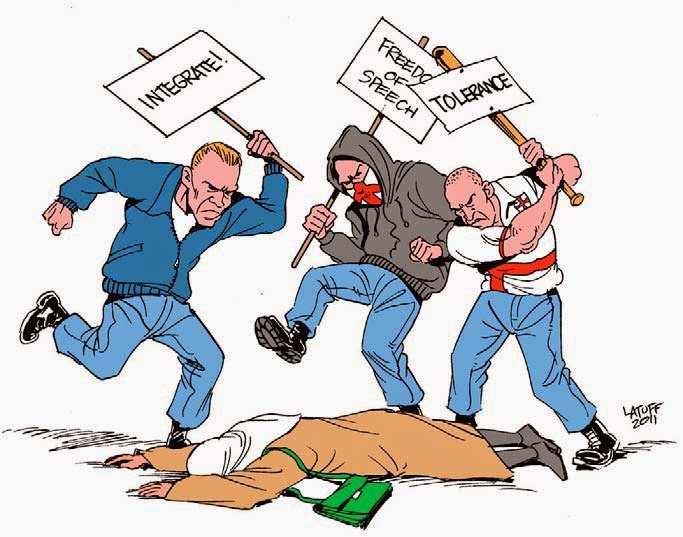 Colonialism had had a similar devastating effect in Africa. For example, Nigeria also received Western support for its ruinous war against Biafra in the late 1960s. The havoc that it caused, including at least one million dead, is one of the rarely discussed causes of the Boko Haram phenomenon.

Globalization is essentially colonialism in a new guise, The World Bank and the IMF force conditions on countries in the Two-Thirds World that are every bit as onerous as those the colonial masters at one time foisted on their colonies. Globalization will breed more terrorism in the future.

Islamophobia has been a curse both for the victims and the perpetrators. Muslims everywhere have been unfairly stigmatized for the misdeeds of a handful of extremists who claim to be Muslim but behave in un-Islamic ways. To contend that only Muslims are guilty of such behavior is yet another example of Islamophobia. All religions have extremists that do not properly represent their faith.

The perpetrators are cursed their fear of Muslims. They fear what they do not understand very well, and thus they are open to those who manipulate them by playing on these fears. PEGIDA is only one example of this. The French state has dome the same in the name of secularism. Politicians in many countries, including Canada, are playing the fear card as well in the name of fighting terrorism.

The fear of terrorism soon morphs into Islamophobia, which as the term indicates clearly, means a fear of Islam, which is seen as the most common purveyor of terrorism. A vicious circle quickly results, with Islamophobia breeding more terrorists, and so on and so on.

The way to stop this is through education. Islamophobia can be cured, but it requires a willingness on the part of both the victims and the perpetrators to grasp what is happening and deal with it. Among those best able to so are politicians who must first end their manipulation of the electorate and realize that electoral victory can be achieved better through fostering unity, rather than their current divide-and-conquer policies.

Then and only then will the curse finally end. Then Muslims will be able to live side-by-side with everyone else in their chosen country without fear of discrimination. That may take a while. As we all know only too well, antisemitism has not yet disappeared in Europe.

France and Germany both have a bad track record when it comes to antisemitism, but Dreyfus and the Holocaust are both now history. May all forms of racism, including antisemitism and Islamophobia eventually become history as well.

Europe can no longer afford a war that pits one religion against another, or religion itself against secularism. My dream is of a pluralistic world in which people of every faith live together in unity.