Why Has the Press Largely Ignored Boko Haram? 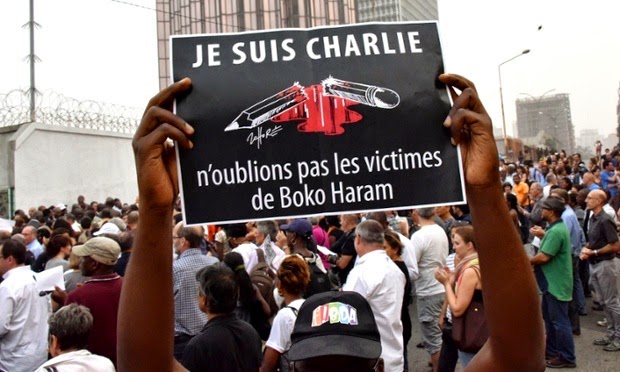 "I am Charlie, let us not forget the victims of Boko Haram"

In the same week that 20 people in Paris (including the three killers) died, there were reports that 2,000 men, women, and children had been killed by Boko Haram in northeastern Nigeria. Amnesty International had initially used that figure, which it had received from the BBC, but it later revised the total to "hundreds."

I immediately asked myself why the press largely ignored the atrocities of  Boko Haram and concentrated on the Charlie Hebdo killings. That seemed unfair. I asked myself: Are European lives worth more than African ones?

When I heard reports about the killings in Nigeria, I became angry, since I know some of the people who lived and worked in the area, They are former student of my wife and I. Fortunately, their lives were spared,

My anger was directed against the Western press which published story after story on the Charlie Hebdo killings, but largely ignored the killings in Nigeria, which were relegated to the back pages of most newspapers.

I voiced my anger on Facebook, as did many other people. Apparently there was a tsunami of anger about what happened in Nigeria. Many writers wondered how the press could have ignored the many Nigerian deaths while focusing almost exclusively on the French ones. 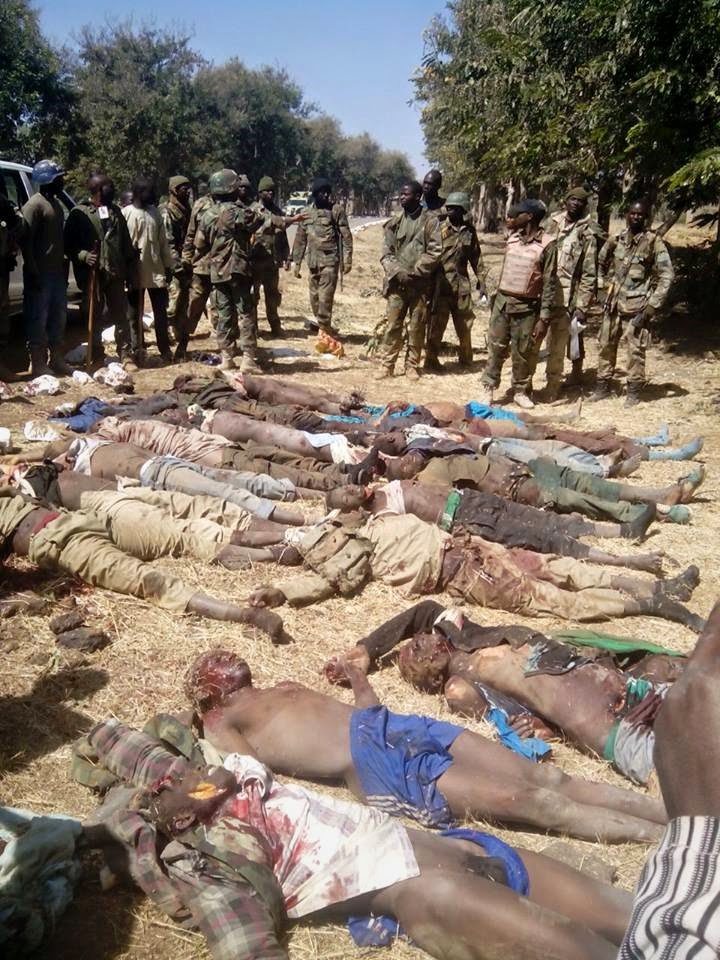 (Warning: graphic photo) Some of the victims of Boko Haram

Only now are more reports coming out about what had happened in that isolated part of Nigeria, although the precise number of dead may never be known. In the last few days I have assembled some of the reasons that Nigerians and others have offered in response to the question of why the press ignored the Nigerian tragedy.

I want to report briefly on some of the reasons that were mentioned. I lived in Nigeria for six years and thus have had some firsthand experience with the unrest there, although I admit I have never knowingly met any of the jihadists of Boko Haram.

Nigerians readily acknowledge that the Nigerian press failed in reporting what happened. Reporting in northeastern Nigeria is notoriously difficult; journalists have been targeted by Boko Haram and, unlike in Paris, people on the ground are isolated and struggle with access to the internet and other means of communications. Attacks by Boko Haram have disrupted connections further, meaning that there is an absence of an online community able to share news, photos and video reports of news as it unfolds.

The geographic remoteness of the region compounds the problems faced by journalists who prefer to be safely ensconced in their offices in Lagos, which is the largest city in Africa and the commercial capital of Nigeria, or in Abuja, the political capital of the country.

The dangerous situation is intensified by the fact that there is too much corruption in the Nigerian government, while the army is poorly equipped and morale is low. So the government does not want any reporting, since that would expose all the corruption and  the inadequacies of the military, which seemingly refuses to fight Boko Haram. 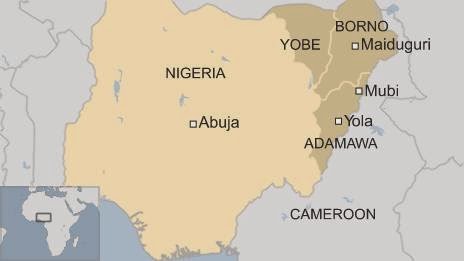 Anyone reporting such shameful facts about Nigeria's system would soon become a target, so no one wants to report on them, except from a safe distance like Lagos and Abuja where the majority of Nigerian and foreign journalists are located.

Then there is the unsavory factor of racism, which I have already touched on. In contrast to the reports flooding out of Paris, the western media largely ignored what Boko Haram did in Baga. There was also very little African coverage, not even by Nigerians.

No African leaders condemned the attacks, nor did any leaders talk of a solidarity with the victims in Baga. One African wrote that "outrage and solidarity over the Paris massacre is also a symbol of how we as Africans neglect Africa’s own tragedies, and prioritize western lives over our own."

In addition, Nigerians feel let down by their political leaders: the world ignored Boko Haram’s attacks because Nigerian leaders themselves have never shown any concern. In the days following the attack on Baga, there has not been a word from Nigerian President Goodluck Jonathan, except for a statement condemning the Paris attacks, although I just heard that he recently made a secret visit the area. But this was weeks after the first attack on Baga, where Boko Haram acquired a stash of weapons from a military base.

The Nigerian finance minister also appeared keener to comment on events far away that have killed far less people, when he expressed his deepest sympathies to the French journalists and their families, but did not mention the killings in his own country.

This is hardly surprising, since local TV stations now follow every twist and turn of the presidential campaign for the election scheduled on February 14. People claim that the president's visit was not motivated by genuine concern for those who lost their homes, but was purely for political reasons. 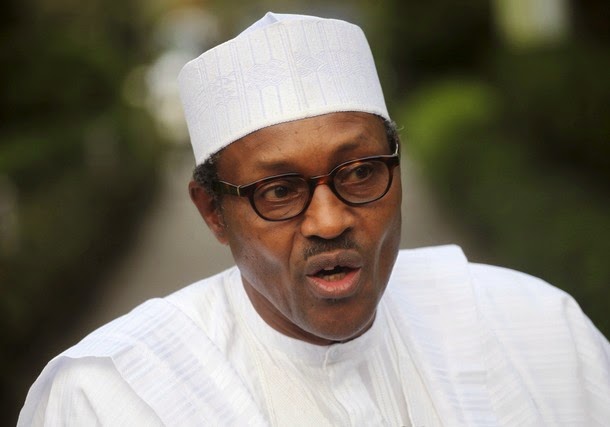 Muhammadu Buhari, the former military ruler of Nigeria, and now the consensus opponent of Jonathan in the presidential election, has said more soldiers need to be deployed against Boko Haram. "The number of soldiers, policemen and officers of the State Security Services they deploy during elections, if they had deployed them to Borno and Yobe states to fight Boko Haram, by now, Boko Haram would have been history," he explained.

The issue of inaction in tackling the Islamic militant group has other explanations as well. The insurgency, which began in 2009 is believed to have claimed more than 13,000 lives already. But for many Nigerians who are living in the south, what is happening in the North appears to be happening in another country. While people are sympathetic to the victims, they do not feel directly affected. Many people were outraged by the atrocious massacres instigated by Boko Haram, yet they feel powerless to act.

There are also people who attribute the massive coverage of the Charlie Hebdo attacks to most of the victims being journalists. It was also helped by the fact that mainstream media reporting is tied into a wider geo-political system of global power through which a range of ideas about places such as Nigeria are implanted into the minds of millions.

These ideas, in turn, have shaped the attitudes of millions of Africans to themselves, cultivating strong feelings of inferiority that occasionally manifests itself in irrational rage. A good example of this is found in Chinua Achebe's brilliant novel of traditional life in Nigeria and its breakdown in the colonial era, Things Fall Apart.

It can also be seen in what is happening in Nigeria, where Boko Haram displays both strong feelings of inferiority and irrational rage. At the gut level, Nigerians understand this, but they are powerless to respond appropriately. Hence, Nigerians ignore it and hope it will go away.

Nigerians are certainly not going to plan marches to commemorate the victims of these atrocities, as happened in Paris. Nor will they invite world leaders to witness their powerlessness. Even journalists are not welcome in the area.

Aside from the geographic remoteness and the dangers involved, the government does it best to hide what is happening there because the army is also complicit in human rights violations. Both the army and Boko Haram have failed in winning the hearts of the local populace, who have in some cases set up vigilante groups to protect themselves.

Boko Haram was founded in 2002 and its aim is to establish an Islamic state, just as IS is doing in Syria and Iraq. The name means "Western education is forbidden." The only education permitted is of the Qur'an. This is symptomatic of their inferiority, while their irrational rage is evident in their capture of schoolgirls, who are sold to Boko Haram fighters or used a suicide bombers, and the deadly massacre in Baga.

None of these actions are permitted by the Qur'an, even though the jihadists claim such support. They have violated Islamic law by taking it into their own hands. All the four Sunni schools of law, including the conservative Hanbali school, declare that women, children, the elderly, the disabled, priests, traders, farmers, and all noncombatant civilians should not be targeted and killed in a jihad. These schools also do not permit the killing of the fellow Muslims. Therefore the behavior of Boko Haram is clearly not rational. 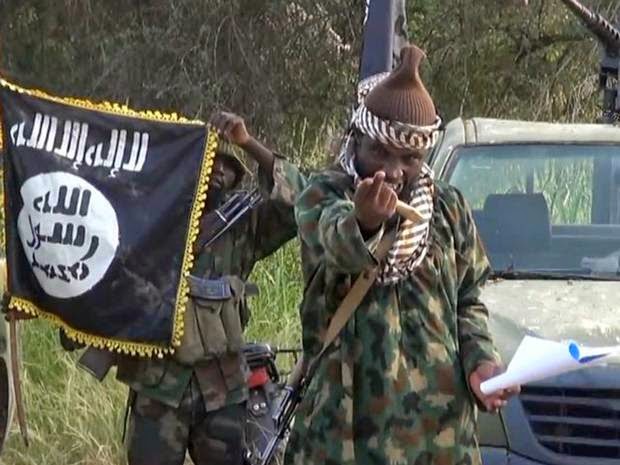 Many western journalists do not realize this. For too many, Africa is still the "dark continent" and Islam is a religion that breeds terrorists. No wonder so many people in Europe and North America are equally unenlightened. Not only is it dangerous to go to northeastern Nigeria but there is also a fear of the unknown. An African Muslim can therefore best be described as terra incognita (the unknown world). As the old mapmakers used to write on the edges of their maps: "Here be dragons."

The foreign news media should contact the Nigerian Union of Journalists, as well as Nigerian researchers on Boko Haram and the Fulani Jihad to get the background information they need to be able to accurately report what is happening in the three states that Boko Haram currently dominates.

As you probably realize by now, there are many reasons why the press ignored so many Nigerian deaths while focusing almost exclusively on the French ones. Some of the reasons are very easy to understand, while others are more complex. Some I have adapted slightly, while others I have developed myself.

Together, they help to explain why the incident in Paris was reported voluminously and with so much emotional appeal -- so much that people all over the world identified themselves as "Je suis Charlie." The one in Nigeria, in contrast, has hardly merited more than a few lines of print until now. This belated shift to Nigeria perhaps can be accounted for by the fickleness of the press, which moves quickly from one story to the next.

I hope that the world will soon start paying more attention to what is happening in Nigeria. But they should look beyond the Nigerian election to the civil war that is taking place in those three Nigerian states. That war has spread intermittently to other parts of Nigeria, but may soon become a permanent fixture there as well. That will not happen, however, if the world takes sufficient notice of what is happening right now in Nigeria with Boko Haram. Let the press take note!