Why is there so much hatred in the US? 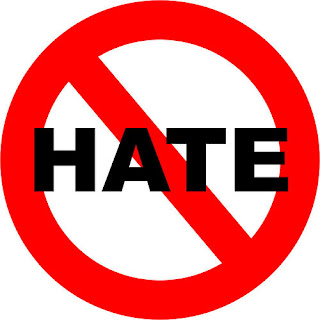 Why is there so much hatred in the US? I don't mean hatred of the US, which is a well-known and often described issue, bur in it. During this US election period, which still has some months to go, I have rarely witnessed so much hatred directed against certain politicians, in particular, Barack Obama and Hilary Clinton, as well as certain ethnic and religious groups. This comes especially from supporters of Donald Trump.

This is public hatred, not just private. We all have things we hate and despise, but most of the time we don't publicize them. Public expressions of hatred against people are frowned upon. But what is currently happening in the US is excessive and indeed borders on hate speech, which is illegal. In the US, however, the First Amendment trumps (pun intended) any hate laws.

These people do not merely dislike certain people, they hate them. I happen to dislike both Clinton and Trump, but I do not hate them. These people, however, become apoplectic with hate. Their hatred of both Clinton and Obama can be described as irrational. They may be rational people most of the time, but not when it comes to these two Democrats whom they blame for everything that is wrong with America today.

One reason why there is such irrational hatred targeted toward anyone is because it makes people feel better. If your life sucks, it's easier to be a victim and say the President is making your life hard than to admit you just suck at life or made bad decisions.

Two days after Obama was re-elected, a fourth-grade boy asked Obama, "Why do people hate you? They’re supposed to love you. And God is love." "First of all," he told the boy, "I did get elected president, so not everybody hates me. What is true is if you were watching TV lately, it seems like everybody’s just getting mad all the time. And. you know, I think that you’ve got to take it with a grain of salt."

Obama touched on two important reasons for the hatred of some people, but his response doesn't address the irrational nature of their attitude to Obama and the woman who wants to replace him as president. There are other, perhaps more fundamental reasons for their seemingly irrational behavior.

The problem lies in the polarized political system that prevails in the US. There are only two main parties and, under the first past the post system (FPP), each must curry favor with their core base, whether right or left (whatever those terms mean at any particular time).

A system of proportional representation (PR) , in contrast, would allow for politicians to address the concerns of a wide spectrum of voters instead of forcing them to move to the extremes as under FPP.  PR is now being actively considered in Canada, although it is not clear that the federal government will adopt it since FPP produces more majorities. while FP often results in coalition governments. 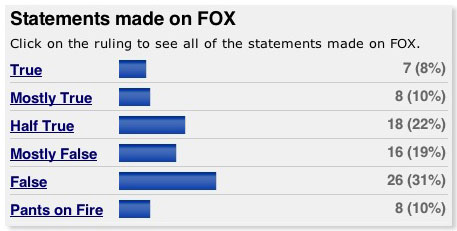 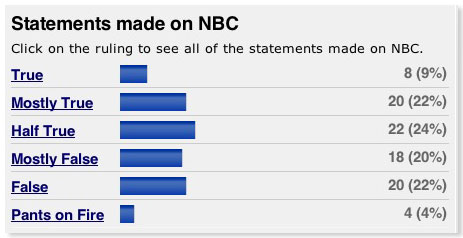 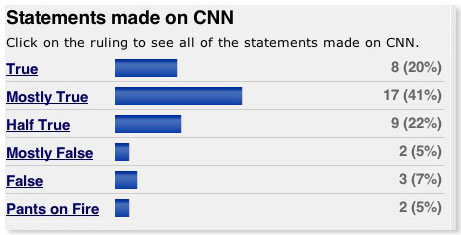 But the main reason is that Republicans and Democrats live in different worlds. They watch different TV networks, listen to different radio programs and access different media. Never the twain shall meet. Both of these worlds are known for the lies they propagate. Truth is a slippery commodity, as Trump illustrates on an almost daily basis. Each side accuses the other of  lies and distortions, although one side seems to specialize in this dubious art. Just look at the survey above.

The two sides transcend the boundaries of the two main parties. Republicans and Democrats can be found on both sides, with the former predominating on one side -- the side that is infamous today for stretching the truth. Trump is the exemplar of this art, but that is another story for another time.

The worlds that these two sides represent differ as much as day does from night. The media on both sides paint diametrically opposite views of what is happening. Thus it is no wonder that the two sides are unable to communicate. with each other. They don;t speak the same language.  For example, one side describes the Obamas as one of the most wonderful and gracious couples ever to inhabit the White House, while the other side portrays them as the exact opposite.  Which is true?

Racism is the elephant in the room.  Many Americans are still not able to accept the reality of a black couple residing in the house that their slave-ancestors helped to build. These people cannot get their heads around a black person occupying the highest office in the land. They hate the Obamas and everything connected with them.

Race is the primary division for them. That is why American cities today have a black center and white suburbs. It is the opposite of an Oreo cookie. Until such racism is eliminated or at least controlled, black/white violence will remain an integral part of American life for many years to come.

Hatred of groups such as blacks is perhaps even more widespread that that of individuals since it is often covert and sometimes unacknowledged. Islamophobia belongs in this category. So does homophobia and other similar phobias. Many people are unaware of their hatred of certain groups until Trump and others stoke their fears by presenting these groups as threats. The result is hate. 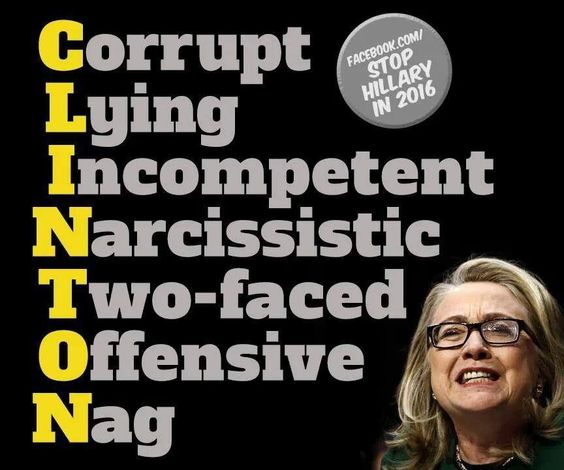 Many of the same people hate Hilary. She represents the elite in America who have deprived them of their jobs, their homes, their future as well as that of their children. They are hopeless, and thus they look for a scapegoat to bear the blame.

Hilary fits the bill perfectly. She comes from a privileged background and is married to a former president who signed NAFTA, the trade agreement between Canada, the US, and Mexico, that many of them hold responsible for their miserable condition. They are angry and filled with hate for her and all Democrats.

The media trumpets their spiteful hatred. Having fed them lies and more lies, the media are now the vehicle for their self-proclaimed savior: Trump. He has fostered their anger and contributed to their hatred by encouraging them to use violence if necessary to derail Hilary's run for the White House and accession to the presidency.

Such hatred is not an entirely new phenomenon in the US. In the 1860s, Lincoln was so hated that half of the country announced they wanted out of the Union and fought a deadly civil war that ended with the nation intact, but Lincoln martyred.

Nixon, Clinton, and George W. Bush have all received their share of derision. But the hatred that some Americans currently spew out is unnerving. How is such hatred possible? We can understand the intense hatred 150 or so years ago, when slavery was the issue. But today there is no similar issue. 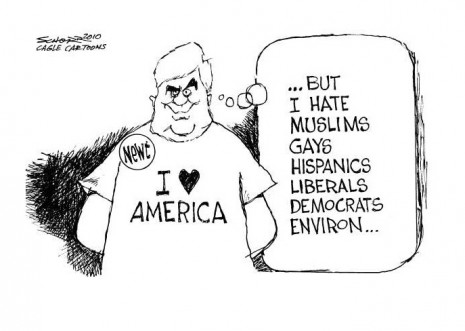 Not even abortion qualifies, since those who are opposed to abortion cannot justify such hatred in the name of protecting the unborn and still remain consistent in advocating the sacredness of life. But hatred can blind people who can hate nearly everything all in the name of love (as Newt does). Many Americans do that.

Hatred, however generated, is not justifiable. No major religion preaches hatred. Instead, their message is always love. Love alone can atone for all the hatred that is being spewed out on a daily basis. The fourth-grade boy who asked Obama, "Why do people hate you?" said correctly, " They’re supposed to love you. And God is love."

I am reminded of the late Jack Layton, the noted Canadian politician, who penned these fine lines: "My friends, love is better than anger. Hope is better than fear. Optimism is better than despair. So let us be loving, hopeful and optimistic. And we'll change the world."  Martin Luther King Jr. expressed similar sentiments about the primacy of love.

Love does drive out hate. That is the appropriate response to the hatred we continue to witness every day. We must set an example of love, not hatred. Love is the message the world needs to hear, not the hate-provoking rantings of Donald Trump. Love will change the world, not hate. Contrary to Trump, love will make America great again, not hate.

Why is there so much hatred in the US? There are many answers, but there is only one way to respond to hatred: love! Love of those in authority, love of groups, love of the other, and even love for those who spew hatred.  Love does change the world! 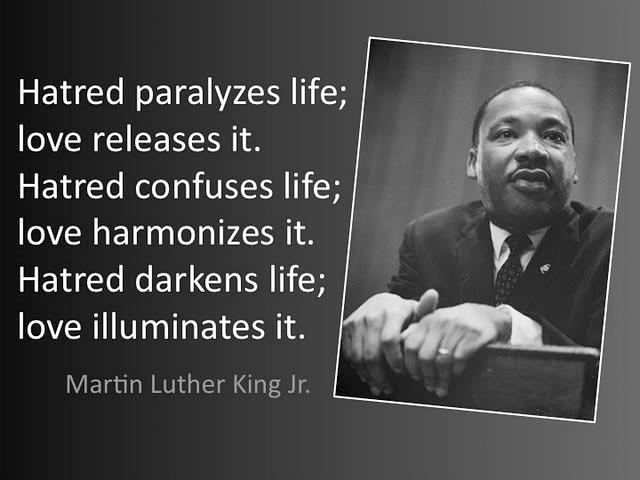