Should Christians vote for Trump? 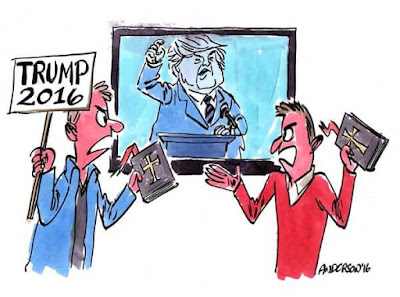 Should Christians vote for Trump?

No one should vote for him, but many people will for reasons they know best. Why anyone would vote for a narcissistic, misogynistic, bigoted, loudmouth like Donald Trump is beyond me, but they will do so "lest they miss the boat," as one ardent evangelical Christian has put it. Many perceive Trump as the savior who will make America great again.

To vote for Trump or not is hardly a trivial issue. The fate of the US and the world may hang in the balance. It is an issue that philosophers and theologians are also earnestly debating. For example, Wayne Grudem in Townhall argues that voting for Trump is a morally good choice, while Michael Stark in The Huffington Post responds by insisting that Christians should not vote for Trump under any circumstances. I side with Stark.

Even Grudem admits that Trump is, in Gudem's words, "egotistical, bombastic, and brash." He also describes him as "vindictive" and adds that Trump "has been married three times and claims to have been unfaithful in his marriages." Grudem allows that "these are certainly flaws," but he doesn't think that "they are disqualifying flaws in this election." Unfortunately, many Americans would agree with Grudem. After all, they would retort, what politician doesn't have flaws?

Indeed, all politicians have flaws. Some of the most recent crop of presidents are prime examples if any were needed. For Christians, flaws are not the issue. Everyone human being has flaws or, to use more biblical language, they are sinners. In that respect, Trump is no different from the rest of us.

What does make Trump different is that he is potentially the next President of the United States of America? He is not just seriously flawed but he is also totally unfit to occupy the White House. There has never been a less suitable candidate for the Oval Office, in my opinion. That opinion is widely shared by many people, even by some Republicans. That number is growing by the day. 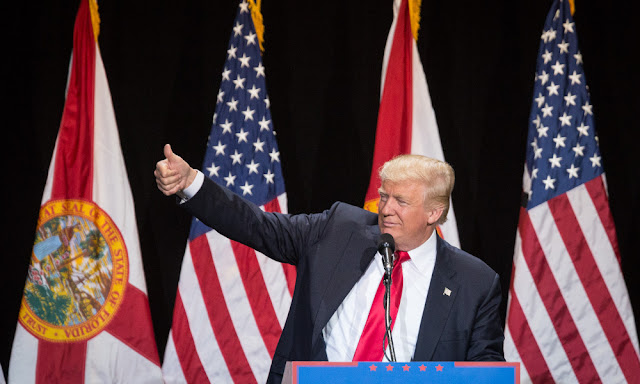 How did Republicans allow him to hijack the "Grand Old Party" of Lincoln and other great presidents? Trump is a disgrace! Is he the best candidate that the Republican Party can come up with out of a pool of about 325 million Americans? That is scraping the bottom of the barrel.

How can Christians vote for such a pathetic individual? He is not only a pathological liar also but totally untrustworthy! He is an imminent danger to the USA and to the entire world since no one is able to accept his word on anything. He changes his policies as easily as he changes wives.

How can Christians vote for a man who sows fear and hatred everywhere he does, and insults every group from women to Mexicans, to Muslims, to LGBT people, to you name it; someone who has no political experience, but prides himself on being a businessman without admitting publicly to multiple bankruptcies or fleecing of his employees? The man is a fraud from the get-go.

How can Christians vote for him and still call themselves Christians? Trump is a morally evil man who should not call himself a Christian since he hasn't the foggiest idea what that means. Even though he was baptized in a Presbyterian church in Brooklyn, he knows next to nothing about the Bible, and -- more crucially! -- he has no idea how to live the Christian life. Even if he had some idea, he would find it difficult if not impossible to live accordingly.

Psychiatrists have refused to make public their diagnosis of Trump, but a spiritual assessment of him can be made public because his public persona contradicts the basics of the Christian life. Of course, no Christian is able to live that life perfectly, but in Trump's case, even the beginnings of that life seem to be absent to judge by his past and current behavior. His self-aggrandizement alone is contrary to the Christian life which should be marked with humility. 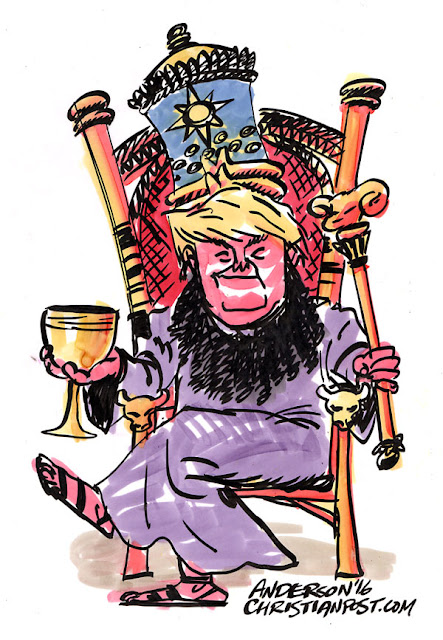 The Christian life is rooted in love and expresses itself the same way, in love of God and neighbor. With Trump, that love has been short-circuited. Seemingly, he loves only himself. No doubt his love for his children is genuine, but he cannot avoid his penchant for using people. That includes his own children.

If you think that I am too critical and judgmental of Trump, turn off Fox and  turn to other, less-biased news sources. Read your Bible and you will discover not only Trump's moral failings but also how far he falls short of the standard that God sets for Christian living. The Bible teaches," by their fruits shall you know them." On that basis, we can judge Trump.

Let me put this more pointedly: a vote for Trump is an anti-Christian vote. His policies, such as they are, are not Christian, His constantly contradicts himself on many issues. In this election, he is using the Christian vote for his own political gain. He is not interested in Christians; he is interested only in himself.

Trump's ego is so big that he wants to become president.because, for him, that represents the pinnacle of success. He is not interested in the duties of the presidency since he will probably leave the nitty-gritty of ruling the country to others, as long as he can bask on the global stage as the most powerful man in the world. Power is his game! Always has been, always will be! 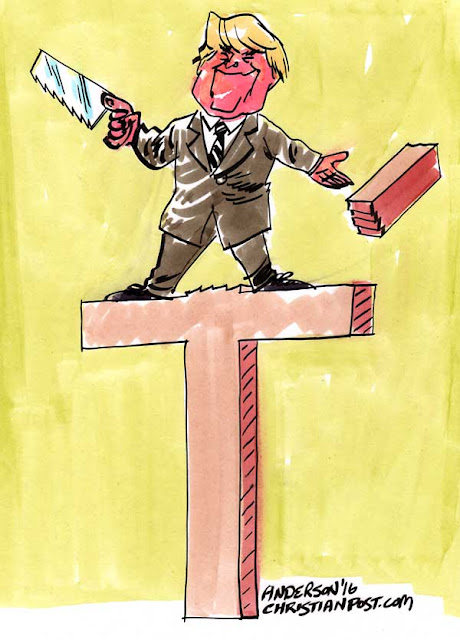 Conservative Christians in the US who cannot stomach the thought of voting for Hillary Clinton can, I suggest, vote for a third-party candidate or refrain from voting on the presidential portion of the ballot. But they should not vote for Trump.

Some Americans may be opposed to voting for any liberal, but they should realize how relative this term is.  Let me give an example. A conservative in Canada will likely be labeled a liberal in the US. That is how much Canadians differ from Americans. It has been said before that Canadians would be among the most reliable Democrats if they were allowed to vote in the US, and that Hillary would win by a landslide come November. According to polls, 73-80 percent of Canadians would vote for her. Paint Canada blue!

Christians must be careful not to let political labels determine how they will vote. A Christian's first allegiance is to God, not to a nation. When the nation trumps faith, something is seriously wrong. There is no reconciling the worldviews of Trump and Jesus. Jesus’ ethic of love stands in sharp contrast to that of Trump.

A vote for Trump is a vote for bigotry. It’is a vote that leads to bullying and more violence. If that is what you want, then go ahead and cast your vote accordingly. If I were an American, however, I would find it difficult to cast a vote for president at all because both the Republican and Democratic candidates are seriously flawed. But as a Christian, I would not be able to vote for Trump. No Christian should!

God calls all Christians to embody love, humility, charity, and kindheartedness. They must embody love not only in their personal lives but also in the public square where politics is played out. They must exercise their civic responsibility by voting in elections or even running for political office themselves, but they must do so wisely and responsibly. 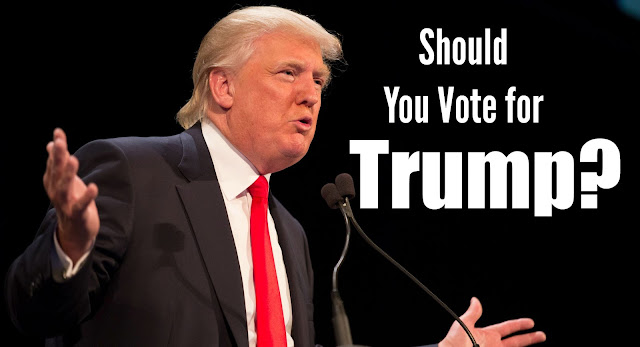 When someone as unworthy as Trump appears on the scene, Christians must use that wisdom and reject candidates who do not embody love, humility, charity, and kindheartedness.  Trump is a false prophet whose message is one of doom and gloom and laced with fear. Where is his love? Instead, Christians must vote for those who advocate faith, hope, and love.  But the greatest of these, as we all know, is love.

Should Christians vote for Trump? You see now why my answer is an emphatic No!