Should churches engage in politics? This question has been around almost as long as there have been churches. It was especially pertinent during the mid-term elections in the US. although other jurisdictions have also had elections recently and the same issue prevails.

A similar question applies when we talk about synagogues, mosques, temples, or what not: should any religious institution be involved in politics?

Almost  three quarter of Americans think that the influence of religion on American life is waning, according to the Pew Research Center, while ore than half of them see this as a bad thing. Even many of those who have no faith (about 30% of those polled) would prefer that politicians have a strong faith.

A slight plurality of Americans would permit churches to have a say in politics, which represents an increase from about four years ago when most wanted preachers to keep their nose out of politics.

The Economist, which published these results, surmises that this change is due to the anger that Republicans in particular feel against President Barack Obama. Obama has become toxic in many states, Even Democrats shied away from him during the mid-term elections.

But most Americans think that churches should not endorse candidates for political office, although the gap from four years ago has narrowed. Have you heard of any church that has endorsed someone from the pulpit? 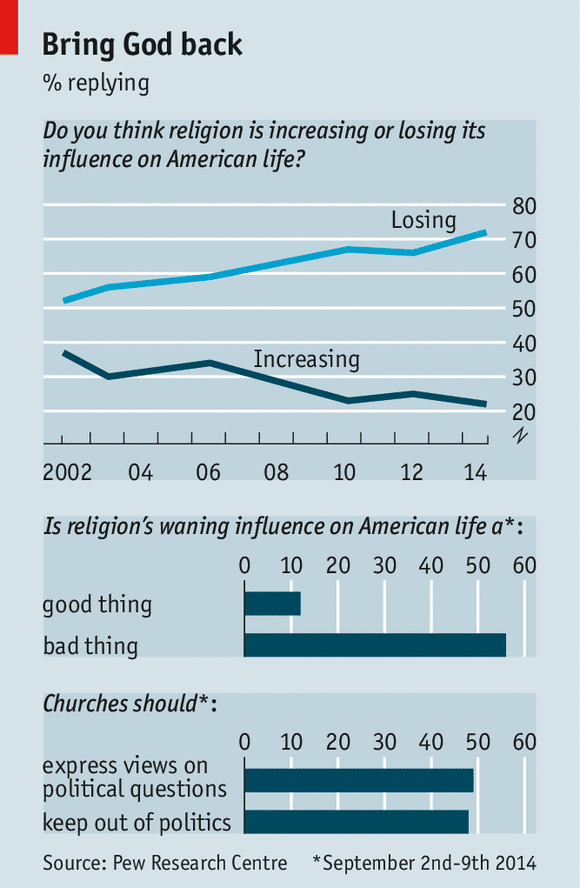 Americans have adopted a strict interpretation of the separation of church and state. Just as the state should not interfere in the business of the church, so too the church should leave the state alone. But in some countries the relationship of church and state is more complex. Just think of Great Britain, where the Queen is the head of the Church of England.

The question whether church should engage in politics is not easily resolved. One way to clarify the issue is to define what the church is.

Houses of worship should obey federal tax law and stay out of partisan politics during election season, according to groups such as Americans United for Separation of Church and State. Many Americans would agree.

Tax law in Canada similarly restricts the involvement of charities (churches are charities) in politics, limiting involvement to 10% of the funds raised. The Canada Revenue Agency recently audited several charities that are concerned with poverty. the environment and climate change, Some supporters of these charities allege the Conservative government has done this for political reasons.

But all that should not exclude all involvement in politics. Christians can and should be involved with politics. For one thing they are voters. They can also run for political office. And they can try to influence public policies, in spite of current constitutional and tax code barriers.

There are many examples from the Bible of believers being involved in politics, but these clearly involve individuals and not institutions.Thus the Bible does not exclude political involvement. 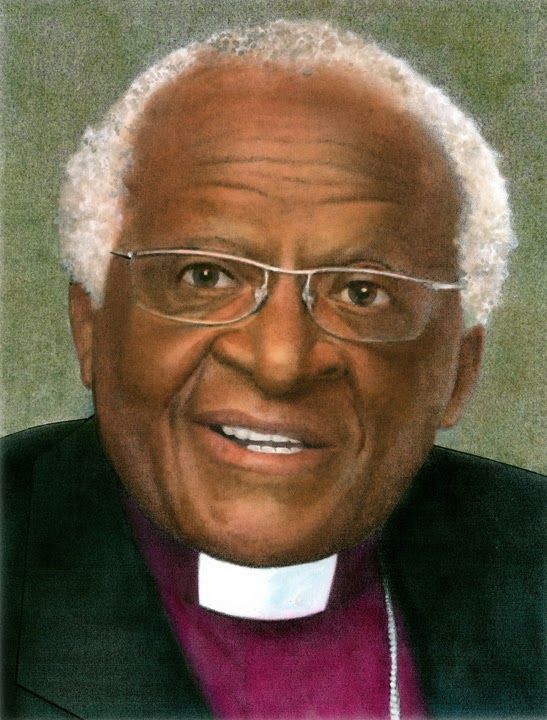 Archbishop Desmond Tutu famously said in the thick of the battle against apartheid, "When people say that the Bible and politics don't mix, I ask them which Bible they are reading."

Faith-based advocacy groups have been harassed by governments, but that should not deter them from continuing with their advocacy work. Such harassment should inspire them to protest such politically-inspired interference. They must plead for more room for political advocacy.

They are examples of the church at work, not as an institution but as part of the body of Christ. Working collectively believers can achieve much more than they can as individuals.

Thus the issue is not: should churches be involved in politics? Instead, the question should be: how can believers best be involved?

The answer is clearly not as institutional churches. In spite of a greater acceptance of the role of religion in the public square, Americans are unwilling to permit churches to endorse candidates for political office. Nor should they.

While churches (synagogues, mosques, temples, etc) as institutions should not be involved in politics, believers can and ought to be, That is their right and their duty. They must do more than just vote.

Some years ago, when I was a pastor, people would not have appreciated my deciding who they should vote for. Nor would they have wanted me to take sides on controversial political issues, such as building a subway or an LRT, to pick a current example in Toronto.

Now, in my retirement, I am free to speak out on all sorts of issues. I do so through various avenues. I am a member of several faith-based organizations and serve on the board of two of them. I also use this blog to vent my thoughts on issues. I do so as a Christian.

I do not expect every one of my readers to agree with me. In fact, I hope they will not. That is the nature of the political process, involving a free exchange of ideas.

I must not try to impose my ideas on others. That is one reason why I object to religious institutions doing so, since religious leaders speak with a certain authority which they must not misuse.

That danger exists for anyone in authority, Teachers, celebrities, and even other politicians, should all be careful whom they endorse or even what stand they take on various issues, If they do so as individuals, that is one thing, But if they do so as official representatives of various groups, religious or otherwise, they must exercise caution.

Caution is the operative word. In what capacity is a person speaking? As an individual or an official representative? In both cases, caution is important, if that person is a leader of some sort.

If Pope Francis, for example, would endorse some political candidate, most people would object. Or if he speaks out on a potentially controversial issue, such as the role of gay people in the Catholic Church, many might applaud his stand, but others might disagree. That is what happened recently when a majority of bishops did not approve the Vatican proposals on gays and divorcees. Thus the Pope needs to be cautious.

Should churches engage in politics? This is indeed a complex question, I hope my position is clear by now. I hope too that everyone realizes that this is my opinion and that it is subject to debate. Please feel free to comment.