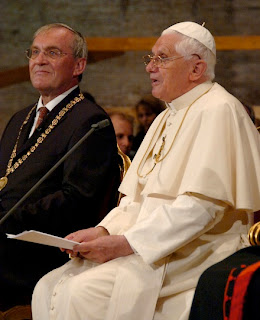 Pope Benedict XVI recently became the first pope in almost 600 years to retire. Not surprisingly, no one knows what to expect from an ex-pope. The Pope says he wants to devote himself to a life of prayer in a monastery and to stay out of papal affairs. That is wise, but it remains to be seen how successful he will be. He is a man of great contradictions. Like many of us, he can say one thing and do something else.

The way he handled clergy sexual abuse is one example of these contradictions. He apologized a great deal, but as pope he did little to bring the perpetrators to justice. The Vatican has seemingly been more concerned about protecting the institution than providing healing for the victims.

His treatment of Islam is another example. Although he often spoke out on behalf of Muslims, he did not reach out to them the same way that Pope John XXIII did to Jews. Benedict is cautious by nature, and that showed in everything he said and did.

In 2006, the year after he became pope, he condemned the cartoons about Muhammad that had been published in a Danish newspaper. Later that year he called for Christians to open their hearts and their borders to Muslims, encouraged dialogue, and pleaded for peace in the Middle East and the establishment of a Palestinian state.

These efforts were the least that the world would have expected from the leader of the Roman Catholic Church on behalf of a major faith that has been under attack in the post- 9/11 world. 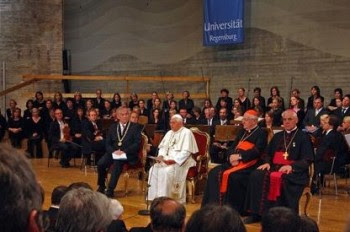 But any good will that was generated by his comments in support of Islam was instantly destroyed on September 12, 2006, when he delivered a lecture at the University of Regensburg in Germany, the same university where he had taught theology for many years. It was entitled “Faith, Reason and the University -- Memories and Reflections.”

In this academic lecture, Benedict quoted the opinion of the Byzantine Emperor Manuel II Palaiologos, "Show me just what Muhammad brought that was new and there you will find things only evil and inhuman, such as his command to spread by the sword the faith he preached."

Many Muslims were offended by this speech. Islamic politicians, religious leaders and scholars protested against what they saw as an insulting characterization of their faith and the Prophet Muhammad.

Mass street protests were mounted in many Islamic countries, and a nun was even killed as a result. Many Muslims called on the Pope to apologize for his remarks.

Benedict did apologize somewhat, but it was too little too late. He explained that the quote he used was not his own opinion, but that of the emperor. At the time, I admit that was the way I tried to defend the Pope as well when my Muslim colleagues at the university in Nigeria asked me to explain his remarks.

An American Dominican scholar in Nigeria, whom I know very well, took the same tack. He translated the text of the emperor from the original Greek into Arabic so that Muslims everywhere could read it for themselves. However, now I realize much better how complex the issue is that the Pope raised, and yet how inadequate his response was when the fur began to fly.

On 13 October 2006, a month after the Pope's address, 38 Islamic authorities and scholars from around the world sent an open letter to the Pope. On 11 October 2007, a year after this open letter, a larger group of 138 Muslim scholars, clerics and intellectuals sent another letter, titled A Common Word Between Us and You, to Pope Benedict and the leaders of other Christian denominations.

The 2007 letter emphasized that Christians and Muslims worship the same God, and share many values, including living in peace with one's neighbors. Many Christians have responded favorably to this initiative and are seeking ways to promote better relations with Muslims. 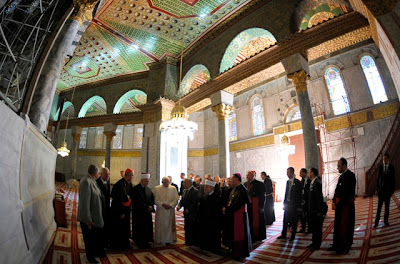 Pope with Muslim leaders in Jerusalem's Dome of the Rock

Was the Pope lacking in his grasp of Islam? Many Muslims argue he was. He was certainly not aware of the consequences of his remarks. But such naivete is inexcusable in his position. He should have had his speech vetted, yet he regarded it as an academic lecture on faith and reason.

Faith without reason leads to fundamentalism, he claimed; while reason without faith results in secularism. He associates the former with violence. In the case of Islam, he explained, it is the product of a perverted form of that faith, not its authentic expression. That point has eluded many Muslims and even some Christians.

It was unfortunate that in this speech the Pope dismissed Islam as an unreasonable and violent faith. Thus the outrage of Muslims was understandable.

Was he contradicting himself? Perhaps not, but Muslims thought his language was not only inappropriate but it seemed to contradict everything he had said since he became pope the previous year.

Let us pray that the new pope will be able to establish better relations with Muslims. It is tragic that Benedict got off on the wrong foot so soon after he became pope. It has been difficult for him to repair the damage from this interfaith gaffe.