The road to Sochi 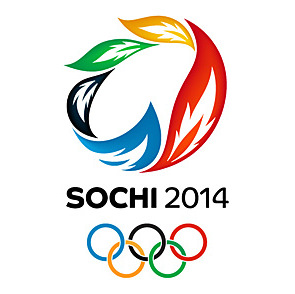 The XXII Olympic Winter Games will begin about a year from now, on 7 February 2014. These are the first Olympics that Russia will host. The 1980 Summer Olympics in Moscow were held in what was then the Soviet Union.

Sochi is located on the Black Sea. It is the warmest place in Russia. The summers are hot and humid.while the winters are mild. Temperatures drop below freezing for only one or two days in the year. In February the average low is only only about 3 degrees C (37 F). Thus it is hardly the optimum choice as the site for the Winter Olympics.

Prior to its selection in 2007, Sochi did not possess any world-class sports facilities. These have had to be built from scratch at enormous expense. They are still not finished, but the Russians seem to be on track to complete the project on time.

The projected cost of these Olympic are expected to be the highest ever (I have already heard $50 billion mentioned). The road from Sochi to Krasnaya Polyana, where the snow events will be held is reputed to be so expensive when completed that it could have been covered in its entirety with a layer of Russian black caviar (which sold last year for about $2,500 per pound) one cm thick. 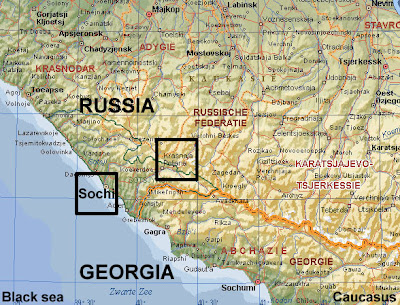 This road is a metaphor for me of the choice of this subtropical city as the site for the 2014 games. Having visited Sochi some years ago, I was astounded when it was selected. There is snow in the mountains, but nothing is found in the city.

I lived in Moscow for many years and had the opportunity to visit Sochi and Krasnaya Polyana. My wife and I wanted to experience this famous city where the elite of Russia would go every year during the Communist period.

The flight from Moscow to Sochi alone was already an experience. This was on the domestic service of Aeroflot. But I use the word service cautiously.

Passengers were still walking the aisles on takeoff and some of the seats were not bolted down properly. One entered and left the plane via a staircase at the rear of the plane.

There were no seat assignments. Fortunately, the days when passengers had to run around the plane and then find a seat are long gone, but this was not much better.

Drinking started even before takeoff. I have heard of some long-distance flights in Russia where no meals were served and only liquid refreshment, primarily vodka, was available. 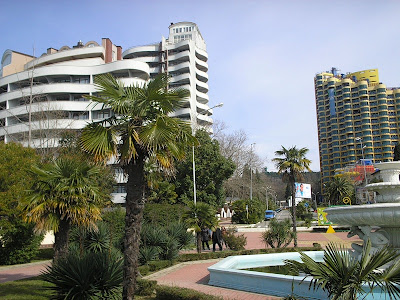 On the drive from the airport, which is located only a few kilometers from the border with Georgia, we were astounded by the sight of palm trees lining the roads.This was not the Russia that we had become familiar with.

We found a hotel where we only had to pay $11 per night for a room. A rather basic Russian breakfast was included. I suspect that this rate will not be available during the Olympics.

We traveled by bus to Krasnaya Polyana on roads that almost made our hearts stop. At many points our bus barely managed to navigate roads so narrow that a mountain towered over us on one side and a cliff dropped off on the other, with no road that we could see in between. The new road will be an enormous improvement over the old one (and much safer).

We were disappointed by the beaches. These were all pebbles, yet Russians will find a spot to lie down and soak up the sun, which shines there about 2,200 hours per year. Summer lasts for six months. In Moscow there is six months of winter.

Today the elite of Russia have impressive villas lining the shore of the Black Sea. President Putin and the Moscow Patriarch are only a few prominent Russians who have summer homes there. 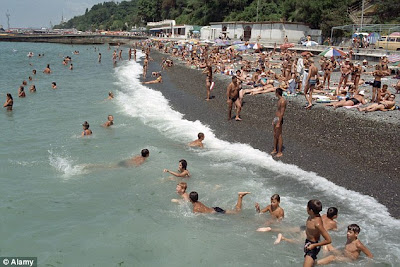 A rocky beach in Sochi

A year before the Olympics and the accusation of widespread corruption are already flying furiously. Very prominent among these accusers is Boris Nemtsov, a leading Russian opposition figure.

Charges of corruption are hardly new in Russia. When we first arrived there, we were already prepared by having lived for a decade in the Philippines, but were nevertheless astounded by the extent of corruption in Russia.

Which country where we have taught for many years, the Philippines, Russia, and Nigeria, is the most corrupt is hard to determine. Stealing is stealing, regardless of the amount and pervasiveness of the theft. In some countries corruption is just done more openly than in others, and thus seems to be more prevalent.

Corruption is endemic in many countries, and sometimes it occurs even in rich countries such as Canada, but that does not excuse such behavior.

Thus it is hardly surprising that the Sochi Olympics, because of the huge amounts of money involved in the construction, have experienced so much corruption. 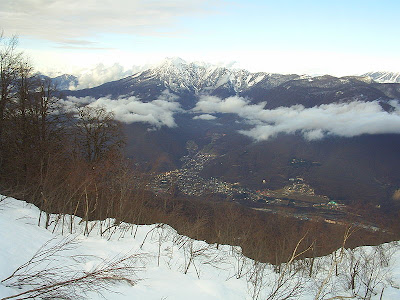 View of Krasnaya Polyana and the mountains

The conflict in Chechnya, which is only a stone's throw across the mountains, poses a potential security threat, but the Russian government is taking measures obviate this danger.

Appeasing the Chechens is hardly going to solve the longstanding problems of this volatile region. In the 19th century Tolstoy already realized how intractable the Chechen situation was.

To hold the 2014 Winter Olympics in a subtropical and volatile region seems foolish, but at this point that decision cannot be undone. The Russians will have their Olympics and, as expected and as their national pride dictates, they will clean up in the medal count. Other nations, such as Canada with its "Win the Podium" program, have done the same when their turn came.

I will not begrudge the Russians their Olympics next year, but I do question the wisdom of this choice, which I suspect was done for political reasons. Putin wanted the Olympic Games and he got them.

The road has been a long and expensive one, yet I wish the Russians success!